No lessons learnt yet

Covid Distress: The pandemic’s second wave in Manipur has made the Centre sit up and take notice 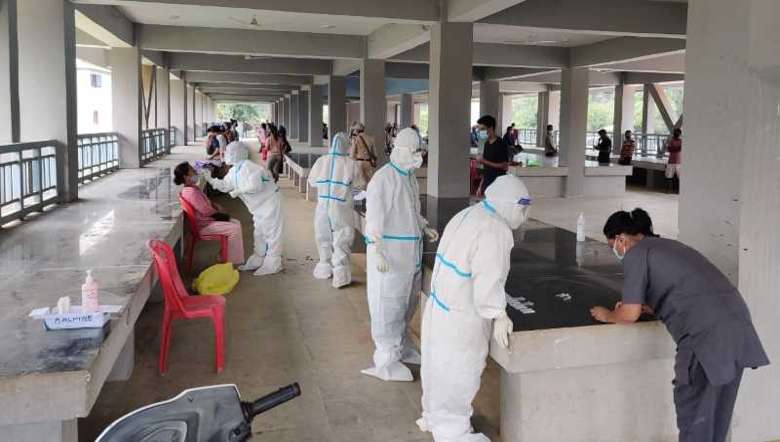 About 100 years ago when my grandfather returned to Manipur as the first modern medical practitioner of the state, he faced severe social ostracism and was shunned publicly as a person who handles dead bodies. So much so that the Maharajah of the time had to issue an edict to the effect that any person found ostracising Dr Thokchom Govardhan would be subjected to imprisonment.

By the 1930s, that negative social sanction had withered away. But when black fever broke out in Manipur and everybody had to be inoculated, he found out that one relative openly expressed his unwillingness to be administered a shot. My grandfather informed the local police who arrested the relative and brought him to the clinic for a jab.

The reason for bringing up such an old tale is to point out the fact that the same taboo was also faced by Covid frontline workers when the first wave hit the country in March last year. But soon, thanks to a sustained campaign, particularly on social media, the present ostracism petered out.

Meanwhile, Chief Minister N Biren Singh has been defending the rise in petroleum prices as an out-come of the free vaccines and rice being given for Covid relief. On the other hand, some legislators have been offering Rs 10 lakh as compensation to the next of kin of anyone dying on account of Covid vaccination. It might make them hog the headlines but sends a wrong signal to the public by creating doubts about the safety of vaccines.

The tragedy seems to be that the state isn’t learning any lessons from past experiences. Covid trains started arriving at Manipur’s railhead of Jiribam around April 2020 from various metro cities and thousands of Manipuris who were stranded there poured in along with the Covid virus. Even after that, the second wave this year caught the administration unawares. The situation is dire as positive cases and deaths keep rising daily.

At the time of writing this article, 1,229 people have already died due to Covid with a daily score hovering around 10. Altogether 74,341 people have been found to be positive with the virus, out of whom 35,060 have been subjected to home isolation. The figure that remains unclear is the total number of hospital beds available for Covid patients.

The Manipur government has taken pride in publishing the photograph of a building, said to be a 100 bed Covid block at the state-run Jawaharlal Nehru Institute of Medical Sciences, in the pages of its calendar this year. Its functionality and occupancy rate are unknown. When I attempted to get a 74-year-old Covid patient admitted in JNIMS two months ago, she was initially denied on the grounds that the hospital had no oxygen supply, but the authorities present refused to give the same statement in writing. It warranted intervention of the then director to finally have the patient admitted and treated. The question is how many people could have access to the director for availing the hospital’s services?

There also seems to be no standard operating procedure when it comes to treatment. State-run Covid care centres have been admitting patients but they are reportedly not provided meals and must often wait for doctors to arrive on their morning rounds before getting treated, even for emergency conditions. That said, local newspapers are filled with pictures of legislators and ministers inaugurating dedicated Covid centres in their respective areas.

This apathy of state-run institutes has led moneyed patients to private hospitals which openly fleece all comers. While out on the streets, SOPs prescribed for the public seem to be only on paper, for how can one explain a traffic jam in Imphal in the middle of a lockdown?

That all was not well with the Government of Manipur’s approach to tackling the Covid menace became clear when the Centre recently dispatched medical teams to six states across the country, including Manipur. At the end of the tour in a press conference in Imphal, Dr L Swasticharan, chief medical officer in the Union Ministry of Health and Family Welfare, stressed on the need for intensive data analysis to tackle the situation. He further said that Manipur needed to strictly adhere to the “Comprehensive Guideline for Management of Covid Both in Adults and Children” issued by the Directorate General of Health Services.

After the team submitted its report, Rajesh Bhushan, secretary of the Union MoHFW, wrote to Rajesh Kumar, officer on special duty to the CM of Manipur, pointing out the need to focus on six important aspects to curb the spread of the virus. He wrote that a positivity rate of more than 10 per cent in about eight of Manipur’s 16 districts was indeed alarming as was the increase in the number of deaths in the last four weeks (13 June-4 July). He stressed on the necessity for a critical analysis of the situation.

Bhushan pointed out the need for a microanalysis of areas showing high positivity during the last few weeks, underlined the importance of maintaining the positivity rate below five per cent and asked to increase testing to aid early identification. On infrastructure, he asked the state to have a continuous vigil regarding occupancy of critical beds (oxygen supported and intensive care unit) and plan for augmentation of healthcare infrastructure in districts where occupancy was more than 40 per cent for any bed category. He also wrote that trained human resources infrastructure, logistics and procurement should be planned considering the geographical spread of the pandemic and touched on the need for timely disclosure of all infrastructure availability-based details on public portals or media with a view to avoid misinformation.

Taking a serious note of the distressing rise in fatalities, the Union health secretary suggested strict adoption of the ministry’s clinical management protocols, and greater focus on making them more effective, smooth and prompt. He also stressed on the need for closer monitoring of home isolation cases and to put in place processes whereby smooth hospitalisation of patients can be done. It was also directed to monitor overall facilities including those for deaths, identify any weak spots and undertake the required corrective actions promptly. Finally, Bhushan spelled out the need for enhancing the vaccination drive by revamping vaccination sites, improving efficiency and utilisation, deploying strategic sites to get the shots near containment zones and speedier means to that effect.

From all the aforementioned directives, it is clear that Manipur has gone back to March 2020 when the pandemic first hit the country. It is apparent that no lesson has been learnt or the issue given the seriousness it deserved. But someone should be held accountable. If it is the bureaucracy, then a shake-up is called for. On the other hand, if the fault lies with the political bosses, then Biren Singh should be answerable as he also holds the health portfolio in Manipur.