MPCC spokesperson Ningombam Bupenda Meitei asked why the union minister laid the foundation of 16 NH projects at Rs 2.19 crore less for every kilometer of highways than what his own Ministry awarded years ago. 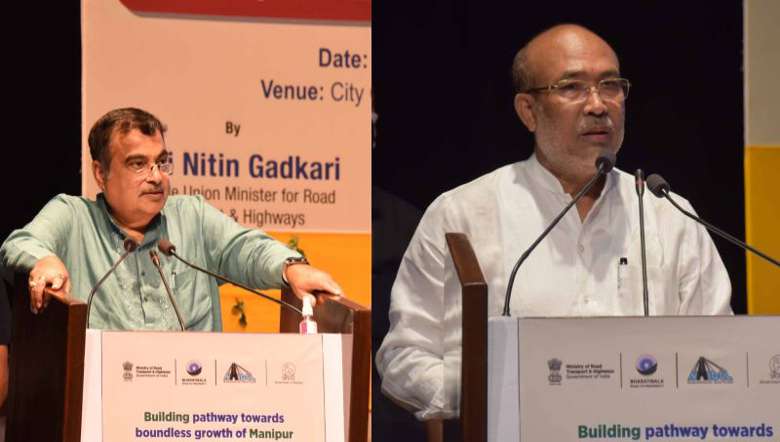 Manipur Pradesh Congress Committee (MPCC) on Thursday raised several questions over the statements made by the Union Road, Transport and Highways Minister Nitin Gadkari and the chief minister during the inauguration of Makru bridge and laying of foundation stone of 16 national highway projects.

In an online press briefing on Thursday, MPCC spokesperson Ningombam Bupenda Meitei said the public statements were self contradictory and MPCC finds the CM’s deadline on completing Barak and Irang bridges as “physically, financially and logistically impractical.”

“The union minister said that there was no dearth of money in his Ministry for the development of the state. But, he laid the foundation of 16 NH (National Highways) Projects worth Rs 4,184 core for a total length of 298 km, which is Rs 14.04 crore per km, recently, whereas his own Ministry, as per Para 5.5 in the Annual Report of 2021 of the Ministry, awarded Rs. 2,939 crore for 181 km, which is Rs 16.23 crore per km in the state,” Bupenda said.

He questioned why the union minister laid the foundation of 16 NH projects at Rs 2.19 crore less for every kilometer of highways than what his own Ministry awarded years ago in the same state, if there were no dearth of money in the Ministry in July, 2021.

Bupenda said the union minister's statement that projects worth Rs 5,000 crores have been sanctioned for the state is in contrast to the report of National Highways and Infrastructure Development Corporation, a fully owned company of the Ministry on May 5, 2021.

The NHIDCL report stated that a detailed project report of Rs. 18, 331 crores for 1422 km of Manipur has already been prepared, he added.

Regarding the union minister’s statement that the projects worth Rs 5,000 crore have been sanctioned for the state, he said that as per the Report of NHIDCL, a fully owned company of the Ministry, as on May 31, 2021, under Original Works, Preparation of DPR (Detailed Project Report) has cost of Rs 18,331 crore for 1422 km for Manipur.

In this regard, he questioned why the union minister, if there was no dearth of money in his Ministry, sanctioned only Rs 5,000 crore when Rs 18,331 crore has been already prepared in DPR for the state. “Should sanctioning Rs 5000 crore in place of Rs 18,331 crore be considered a sign of having no ‘money issue’ in the Ministry?” he further questioned.

The spokesperson said the union minister stated that the expansion of highways in the state would be recommended under the Bharatmala Phase – II. But, the fact is under Bharatmala Phase – I, already Rs. 10,030 crores for 736 km for Manipur has been prepared as DPR, as per the Ministry’s NHIDCL report on May 5, 2021.

As per the statement of the Union Minister, while starting Green Highways (Plantation,Transportation, Beautification and Maintenance) Policy, 2015, it mentioned that 1 per cent of the total project cost of all highway projects will be kept aside for the highway plantation and its maintenance, which will generate employment, and every planted tree will be counted and auditing will be done, using ISRO’s Bhuvan and GAGAN Satellite systems, said Bupenda.

He said the Ministry’s NHIDCL Report, as on May 31, stated that for Manipur, Ongoing Works under Original Works has cost of Rs 8203 crore for 864 km.

He also questioned whether auditing of planted trees had been done with ISRO and GAGAN Satellite systems.

Bupenda also questioned how many crores in the state have been utilised under the Green Highways Policy in the state and whether auditing of planted trees has been done with ISRO and GAGAN Satellite systems.

“The chief minister said the Irang bridge would be completed by December, 2021. But, the contractor, as per the Ministry’s status report, mentions that the date of completion would be January 11, 2023 11, which is a four lane bridge with 0.377 km of length, as per the contract,” he added.

Bupendra further said, as per the PIB release on July 12, the union minister inaugurated and laid foundation stone of 16 National Highways Projects worth Rs. 4,184 crores for a total length of 298 km of roads. However, the inauguration of Makru Bridge by the union minister in the state is not mentioned in the PIB press release, he added.