The question of leadership 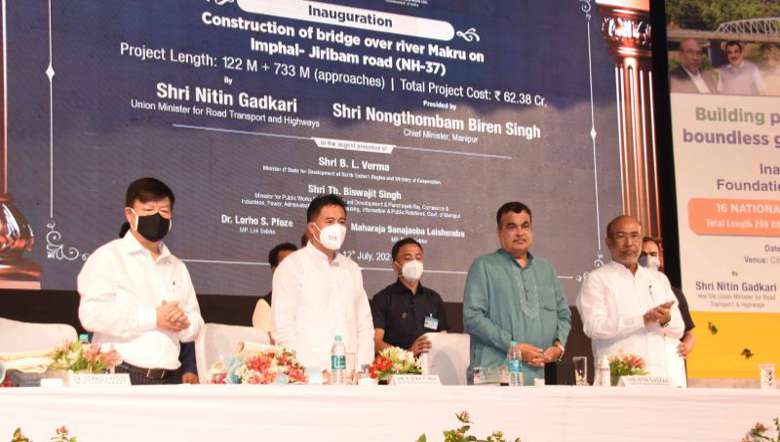 Union Minister for Road Transport and Highways Nitin Gadkari on Monday inaugurated the Makru Bridge along the National Highway-37. He also laid the foundation stone for 16 National Highway projects in Manipur covering a total length of 298 km with an investment of Rs 4,148 crore. Addressing the inaugural and foundation laying programme held at Imphal, Gadkari said projects worth Rs 5,000 crore have also been sanctioned for the state and the detailed project reports (DPR) will be completed within six months and the work will start in a year’s time. The expansion of highways in the state will be recommended under the Bharatmala Phase ll Pariyojana, the Union minister had assured. Minister Gadkari tweeted on Tuesday that the new highway projects recommended by the chief minister will be sanctioned. Makru bridge is the first of RCC bridges constructed on the Imphal-Jiribam Highway. RCC bridges over Irang and Barak rivers on the highway are under construction and will be ready soon for public traffic, as according to NHIDCL. It was indeed a dream come true for the present Chief Minister N Biren Singh. Long has he been pursuing the dream of making the Imphal-Jiribam highway as a reliable lifeline of the state with the Imphal Dimapur highway constantly plagued by economic blockades and a bargaining chip for the Naga rebels specially the NSCN-IM. But, the bridges over Barak, Makru and Irang Rivers on the highway were unreliable as it were bailey bridges. With the coming of BJP led government in the state RCC bridges were approved for Barak and Makru. Now, the proposal for Irang bridge have also been approved. The National Highways and Infrastructure Development Ltd NHIDCL had assured the inauguration of Barak and Makru bridges in a few months while also assuring completion of the RCC Irang bridge within a year.

Imphal-Dimapur road (NH 2) and Imphal-Jiribam road (NH 37) have always been a rallying point for politics by certain communities doting these national highways and a pressure point for raising of all kinds of demands and grievances. The other two national highways seldom comes in the limelight. Manipur being a land-locked state highly depends on the highways for ferrying in food and all other goods including essential items, which is exactly why highway blockades have become a bargaining chip for groups who have an axe to grind with the state authorities or holding it to ransom for realisation of their demands howsoever petty it be sometimes. Besides, during the rainy season frequent landslides happens because of the soil conditions in this part of the country. Works for construction of Pucca bridges over Barak and Makru was begun in right earnest and it is going to be completed at the beginning of 2021, as promised by NHIDCL. Finally, the Union Minister for Highways and Surface Transport Nitin Gadkari came to Manipur and inaugurated the Makru bridge while also laying the foundation stones of several highway projects amounting to Rs 4,148 crores.

The chief minister and his band of followers are ecstatic with the inauguration of Makru bridge to be followed by Barak and Irang bridges besides a slew of new projects. The social media was awash with praises for the BJP both at the Centre and state. But, they seem to be far removed from the reality. Just as the Union Minister said, the implementation part of the highway projects were far from satisfactory and it was mostly because of unresolved issues of land compensation and law and order problems. Minister Gadkari even questioned the responsibility of the state leadership which had failed to resolve the compensation issue and law and order problems. The entire blame has been laid at the feet of the chief minister. He said, there will always be problems but that it has to be resolved by hook or crook so that the highway projects are implemented in time. Highway projects are always bogged down by land compensation issues and harassment from militant groups. It is for the state to lay down the rule of law and thwart any issue detrimental to the implementation of projects with an iron hand.