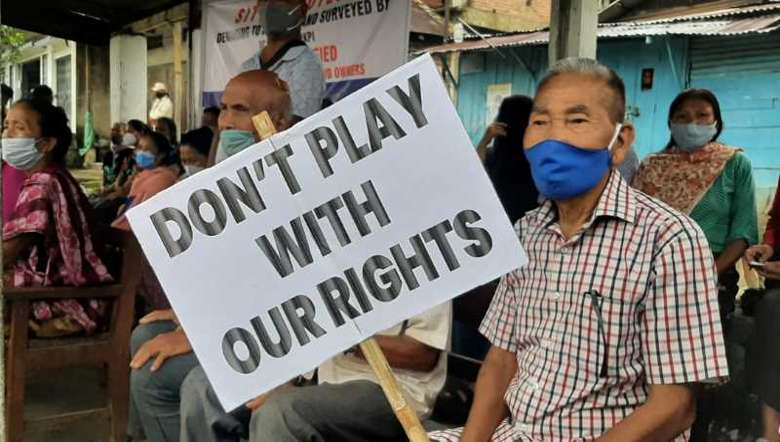 The International Human Rights Association Manipur (IHRA) has reaffirmed its decision to boycott the ongoing construction and upgradation of the Asian Highway-1 in Tengnoupal district under the Road Transport and Highways Ministry.

Cautioning the Manipur government and the implementing agency to stop discriminating against the affected landowners by using police force, which is a first degree violation of the fundamental human rights, the IHRA stated that it will not accept any work schedule on AH-I to be carried out by the state government before a memorandum of understanding is signed between the IHRA, the Asian Development Bank (ADB) and the Road Transport and Highways Ministry.

IHRA Manipur president Mark Thangmang Haokip, who is also the Myanmar coordinator, pointed out that on February 12, the association had declared to boycott the construction of AH-1 after two-months-long investigation with the help of ADB and RTU, and the boycott was reaffirmed as per decision by IHRA on Monday.

The IHRA Manipur president further said that it has been 149 days (from February 12 to July 12) since the boycott began, and IHRA did not witness any positive engagement from the government to solve the imbroglio.

The implementing agency, the state government, and the district administration are making several attempts to destroy the intervention of the human rights body through some conspiracies.

Besides, their intervention had carried out different kinds of strategies to disturb and threaten those affected landowners in altered manners as they even served force eviction notices against them.

“One IRB personnel had also been arrested and detained in police custody and then suspended from his service because his family members had taken part in the agitation for demanding fair compensation while other protesting villagers were threatened and arrested apart from detaining without proper reason,” he alleged.

Meanwhile, the IHRA also strongly condemned the alleged misapprehension made by the state government, NHIDCL and Asian Highway Land Affected Chairmen/Chiefs Association (ALACA) that there shall be no compensation of land for acquiring highway concerning the 1963 survey of land for the national highways made by the government. What has been published in the newspapers is not the accurate law in the scheduled area or indigenous tribal land and is purely misleading, he added.

Thangmang claimed that the news also reported that such advice was given to them by a revenue commissioner, who does not acquire the knowledge about the non-revenue land or schedule area or indigenous tribal land.

In that such revenue, the Act has no place in it and the claim is totally against the rights of compensation on Land Acquisition, Rehabilitation and Resettlement Act, 2013, Indigenous Land Rights declared by the UN Declarations on the Rights of Indigenous People, 2007 and the Constitutional Rights Article 371 (C) and it violates ADB’s safeguard policy, he added.

He also said that the members of ALACA and the implementing agency, who are making such press statements, are equally involved in mismanaging the funds for compensation to the affected landowners. They carried out such an agreement for hiding the crime they had committed, he said.

The ALACA committee does not represent the affected landowner and it is a fake committee created by those responsible persons who had caused the mismanagement of crore of compensation money, he said.

IHRA, Manipur is ready to welcome the finalisation for bringing solutions to the imbroglio through signing an MoU between IHRA Manipur, ADB, and Ministry of Road Transport and Highway within the monsoon season, he added.