Gadkari said projects worth Rs 5,000 crore have also been sanctioned for the state and the detailed project reports (DPR) will be completed within six months and the work will start in a year’s time. 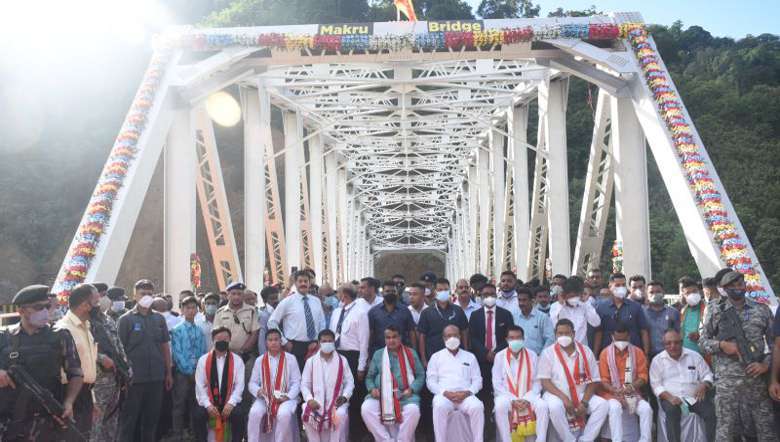 Union Minister for Road Transport and Highways Nitin Gadkari on Monday inaugurated the Makru Bridge along the National Highway-37. He also laid the foundation stone for 16 National Highway projects in Manipur covering a total length of 298 km with an investment of Rs 4,148 crore.

Addressing the inaugural and foundation laying programme held at City Convention, Imphal, on Monday, Gadkari said projects worth Rs 5,000 crore have also been sanctioned for the state and the detailed project reports (DPR) will be completed within six months and the work will start in a year’s time.

The expansion of highways in the state will be recommended under the Bharatmala Phase ll Pariyojana, the Union minister said. He said the prime minister is giving the highest priority to the Northeast.

Expansion of road infrastructure will contribute to the development of Manipur and make it socially and economically strong, he said, adding that water, power, transport and communication are the four most important things for the development of an industry, generating employment and eradicating poverty.

Gadkari also said Makru Bridge which construction began in 2016 has been finally completed due to an excellent leadership. In a similar fashion, it is upon the leadership to make an excellent socio-economic transformation of a state or the country. He also said that the progress of any country depends on the growth of three sectors–Agriculture, Industries and Service Sector.

Gadkari further said that the projects which were inaugurated will provide all weather connectivity to Manipur with the rest of the country and the neighbouring countries. They will boost agricultural, industrial and socio-economic progress of the region, he said. They will also facilitate healthcare and emergency service to the remotest of the areas and generate employment and self-employment opportunities, he added.

The minister said that Manipur is a very beautiful state with immense potential for tourism, and sought the cooperation of all the stakeholders for resolution of problems and completion of projects in a time-bound manner. He said the details of all the projects will be posted on the website.

The programme was attended by MoS, DoNER, BL Verma; Minister, MPs, MLAs, party functionaries and officials of the state government and NHIDCL.

Meanwhile, speaking after flagging off the transportation across Makru Bridge, Gadkari said the Centre has decided to give highest priority to develop the North eastern region, particularly Manipur. The Centre needs cooperation of the state government and the people in any developmental works taken up, he said.

“By making this road, we are going to encourage more tourism in this area. Tourism is an industry where it points to create 49 per cent of capital investment for employment potential.”

Gadkari also gave an assurance that the Barak river bridge will be completed within September, and declared that a project worth Rs 25,000 crore will be set up in the state within the next two years. He also appealed to the state government to resolve the problems of land acquisition.

Chief Minister N Biren Singh in his speech said the bridge has been completed with the support of the public in the surrounding villages. He said an amount of about Rs 400 crore has already been sanctioned for widening the Imphal-Jiribam road. He also appealed to the public to support the construction of Irang bridge since the completion has been delayed due to certain factors.

Minister minister Awangbou Newmai said the project is one such project in the state which is completed within the stipulated time.