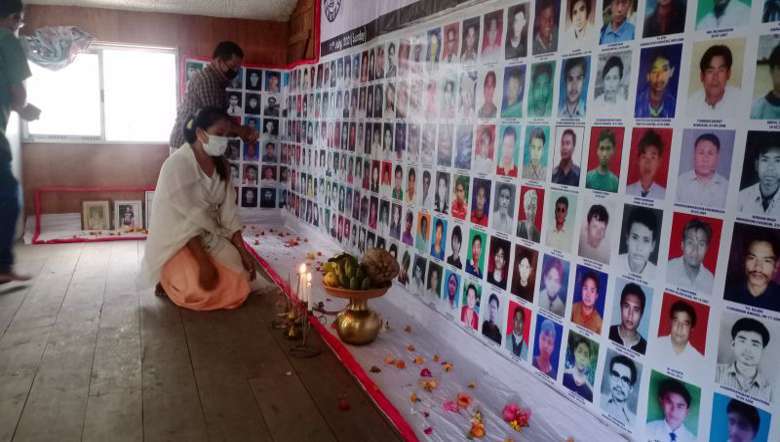 Family members of the victims of extrajudicial killings in Manipur expressed discontent and concern during the observation of the Extrajudicial Execution Victim Families Association (EEVFAM) foundation day 2021, as justice is yet to be delivered. In 2012, a total of 1,528 cases were filed before the Supreme Court.

EEVFAM secretary Edina Yaikhom, while addressing the EEVFAM 12th foundation day held at its office in Imphal on Sunday, presented the status of the ongoing CBI investigation and trial in the CJMs and Sessions Court in Manipur following the EEVFAM's PIL filed before the Supreme Court.

Yaikhom said, of the 1,528 cases filed, the CBI had registered 39 FIR cases and chargesheeted only 19 cases. Of the 19 cases chargesheeted, the CBI submitted closure of nine cases, citing lack of evidence.

Dissatisfied with the closure reports, EEVFAM filed protest petitions. Following the protest petition, the Supreme Court had directed the CJM, Thoubal and CJM, Imphal East for reinvestigation of two separate cases, out of the nine cases, she added.

However, the chargesheeted cases have been laid pending as prosecution sanction has not been given for the Central armed forces personnel who were involved in the case, the secretary mentioned.

After the listing of the EEVFAM's PIL before a Supreme Court bench in 2018, the apex court had not listed the case till today, Yaikhom further said.

Following the observation that the two most gruesome incidents of human rights violations which sparked off massive people's resistance took place on July 11 in two different years, EEVFAM also released a book during the observance entitled "The 11 July: A Compilation of Reports Pertaining to Operation Bluebird and Murder of Manorama."

Highlighting the two gruesome incidents of July 11, executive director of Human Rights Alert (HRA) Babloo Loitongbam informed that 27 persons were allegedly killed, three women were allegedly raped and five women were sexually molested while 300 others were allegedly tortured during the three-month-long Operation Bluebird launched on July 11, 1987.

The Operation Bluebird was launched by the Assam Rifles troops stationed at Oinam village, Senapati district on the nearby villagers in retaliation to an earlier NSCN attack on them, he added.

In this regards, NPMHR petitioned the Gauhati High Court in October 1987 and the final hearing was conducted before the bench of justice Phukan and justice Shishak in March 1992, he said, adding however it was only after 26 years that the High Court of Manipur finally pronounced the judgment on June 13, 2019.

He said the judgment reads, "Despite several orders of this court in recent times, it appears that the entire records could not be identified or located. There is no final or interim report from the District Judge, Imphal."

The court directed the secretary (Home) to constitute a committee consisting of the SP and the DC of Senapati district to hold an inquiry into the incident of Operation Bluebird within three months, but there is no sign of the committee being constituted, he added.

"Even as all legal evidence and testimonies of the gruesome act of mass atrocities evaporated into thin air without a trace from the very institutions that is constituted to defend the fundamental rights of citizens and deliver justice, the only comprehensive report of the incident available today in the public domain is the Amnesty International report entitled "Operation Bluebird," said Babloo.

The report is stated to be based on many detailed eyewitness accounts, much of it sworn testimony which was cross-examined in court, he said, adding it seems that this report was basically a summary of the evidences recorded by sessions judge C Upendra Singh which EEVFAM is reproducing today.

Regarding the infamous Manorama murder case which occurred on the intervening night of July 10 and 11, 2004 by the 17th Assam Rifles troops, Babloo said, "The all-male soldiers' team, without any police woman, interrogated and tortured her in front of her family. She was whisked away in their vehicle after issuing an arrest memo. The next morning, her lifeless body was found by the roadside with tell-tale signs of rape and torture."

In response to the massive and unprecedented protest, the state government constituted a Commission Inquiry and despite strong objections by the AR questioning the competence of the commission to inquiry into their conduct, the Commission conducted a thorough inquiry and submitted its report.

However, the government never made the report public or placed it before the cabinet or in the Assembly and no action was taken on the 20 recommendations listed at the end of the report, he added.

Babloo further informed that the commission categorically fixed the responsibility of the persons responsible for the death of Manorama in the following words: "In view of the materials before the Commission and for the reasons given above, five persons viz. Major N. Dagar, Commander of the operational team of 17th AR is responsible either directly or vicariously, four other personnel who joined in the operational team viz. Havildar Suresh Kumar, Rifleman T. Lotha, Rifleman Ajit Singh and Rifleman Saikia are directly responsible for the killing of Monorama in the custody of the 17th AR."

It was almost after a decade, in the course of the proceeding of the EEVFAM case WP (Cril) 129 of 2012, the Supreme Court demanded copies of all the reports of the Commission of Inquiries constituted by the state government on extrajudicial executions, which has already been submitted, he added.