The Manipur chief minister said that the state government will provide loans with 50 per cent grant to fish farmers who produce local Sareng. 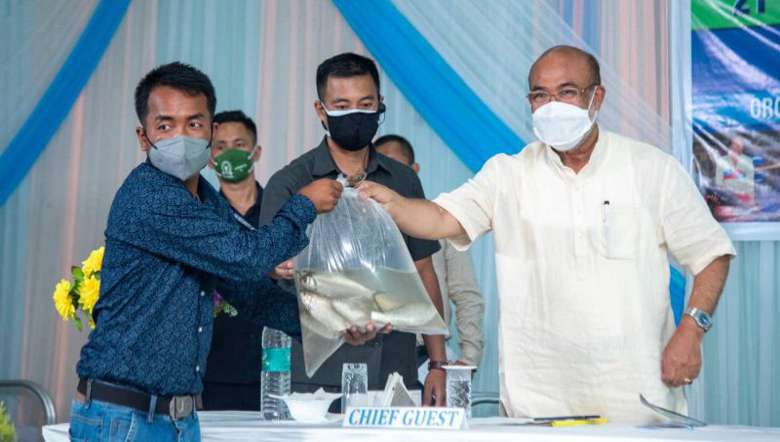 Manipur Chief Minister N Biren Singh on the occasion of the National Fish Farmers'  Day 2021 announced that the state government would provide loans with 50 per cent grant to fish farmers producing local Sareng.

The National Fish Farmer day was organised by the Directorate of Fisheries at its office complex located at Lamphelpat. During the programme, the chief minister instructed the Fisheries department to introduce a scheme in regards to providing the loans with 50 per cent grant.

Biren said that Manipur is a state with its cuisines characterised by abundant use of fish and stressed on the need to carry out advanced fish farming in order to meet the public demand for fresh fish which are healthy for consumption.

He added that the state government, since its formation, had earlier identified some sectors which needed prioritisation in which fisheries was one of them. With the aim to increase fish production in the state, the government had also provided financial assistance to many fish farmers under certain schemes.

Appreciating the Manipur State Co-operative Bank Ltd for providing loans of around Rs 22 crore to fish farmers till date, he maintained that the government had now made access to loan by farmers easier in lesser time with its single clearance window system and added that this initiative had convinced borrowers to timely repay the loan too.

He also added that the production capacity of fishes in the state had also increased from 31,000 MT to 33,000 MT per year now with the joint efforts of the government and the fish farmers.

The production capacity had been affected to some extent by the pandemic which otherwise would have increased significantly, he said.

Biren said that the government is putting in best efforts to produce sufficient quantities of fingerlings for supply to fish farmers at a lower rate. He stressed on the need to make fish feed locally available in order to reduce the cost incurred in fish farming.

This would help in making fish products available to the people at lower prices, he added. Instructing the department officials to inquire if the machine for producing fish feed was working properly, Biren asked them to procure a new machine if it was found not working.

Addressing the gathering, Fisheries Minister Sorokhaibam Rajen said that the production capacity of fish in the state had increased to 33,000 MT in recent years under the innovative ideas and supervision of Chief Minister N Biren Singh.

He informed that the government had also provided land for three years, to those landless farmers who want to carry out fish farming, on lease amount of Rs 20,000 per acre per year under the Loktak Livelihood Mission. This would help in increasing fish production in the state, he added.

The minister further informed that he and his department officials met the union fisheries minister and briefed about certain necessary projects on his recent visit to Delhi. He also announced that one cold storage each would be constructed at Imphal West and Bishnupur district to prevent wastage of fish.

Director, Fisheries Heisnam Balkrisna Singh said that National Fish Farmers Day is celebrated on July 10 every year in memory of scientists KH Alikunhi and HL Chaudhary for their successful demonstration of Hypophysation (technology of induced breeding) in Indian Major Carps on July 10, 1957.

The other awards included highest individual fish producers, highest fish production officers in valley and hill districts and Consolation prizes among others. The awardees were also provided certificates and a coffee table book of Four Years Citizen Centric government.