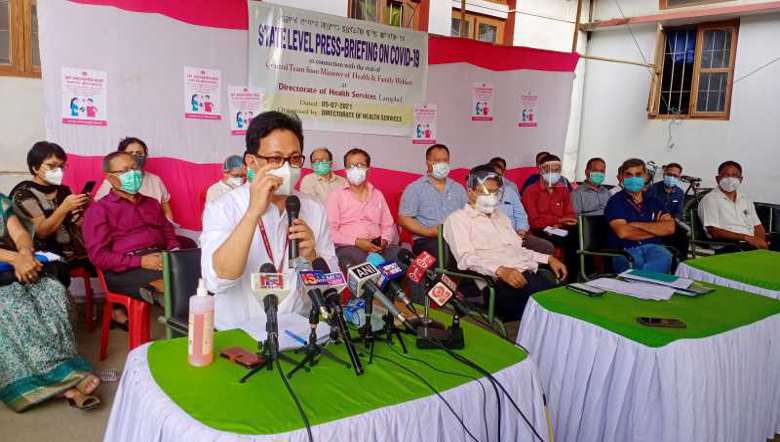 Covid fatigue may be one of the factors for the increasing number of positive cases in Manipur, said Dr L Swasticharan, additional deputy director general of the Union Health and Family Welfare Ministry,  on Monday. As such, to contain the spread of COVID-19 infections in the state, Dr Swasticharan stressed on the need for improving the active contact tracing and strict monitoring of home isolation protocols.

Swasticharan, who is also the director of Emergency Medical Relief (Disaster), was speaking to the media at the office of the Health Directorate in Imphal. He was leading the two-member team dispatched by the central government recently to Manipur to monitor Covid management in the state that has been facing a high number of positive cases. The other member of the team was Dr Sagar K, who is the assistant professor of AIIMS, Bhopal.

According to Swasticharan, fatigue in following Covid appropriate behaviours by the public may be one of the factors for the increase in the positive cases in the state.

Regarding the rise in the mortality rate compared to the first wave, he said that it might be due to late detection of the virus in the patients, late admissions, comorbid conditions of the patient and lack of infection control by the hospital.

Since the last two days, the team has been studying and analysing the data and steps to find the factors for the deficit in controlling the pandemic, he said, recommending the need to streamline the admission process of Covid patients in RIMS and JNIMS by following the guidelines of the Health Ministry.

Mentioning that it is his official third visit in the state during the pandemic, he appreciated the state government for working at their best level by forming an Integrated Covid Control Centre.

Pointing out that the Covid vaccine might not give full protection from the virus, he said that it will protect from getting severe infections. He appealed to the public to accept the vaccine and get vaccinated as it is the only way to combat the virus apart from following the Covid appropriate behaviours.

Director of Health Services, Manipur, Dr K Rajo, who also attended the press conference announced that the state is all set to effectively combat the third wave of COVID-19, if it occurs.

Is Manipur ready with a hospital for child Covid patients?

The 60-bedded COVID hospitals at Canchipur, Imphal will be converted into a dedicated child Covid hospital, and the state will also appraise private hospitals to reserve specific Covid beds for children, he said.

Is there enought medical aid to counter the possible third wave?

The state does not have shortage of medicines, medical equipment, hospital beds, ambulances, oxygen and medical staff including doctors and nurses, he said.

Currently, there are three functional oxygen plants in the state, nine are in progress and another 16 more plants will be set up soon, he mentioned. The state has 1,235 regular doctors, 1,359 contract doctors and more medical staff will be recruited soon, the director added.

Is there a plan to set up a testing facility in the state?

Rajo also informed that the government is also preparing to set up a genome sequencing lab at IBSD (biotechnology) at Takyel, Imphal so that the testing of the Covid variants can be done in the state itself.

He further said that the Delta variant of the Covid virus, which has been detected among the positive cases in the state, is mostly affected to the age group between 25 to 59 years. So far, 89 individuals have been detected with the variant and result is awaited for 203 samples which have been sent to outside states for testing, he added.

Mentioning that the delta variant is more communicable than the normal variant, Rajo appealed to the public to continue following Covid appropriate behaviours and avoid gatherings even among family members.

He also asked the public to come out for testing without hesitation as early detection and early treatment is more effective.

According to the Health directorial data, the positivity rate in the state during the first wave (as on December 2020) was 5.9 per cent, recovery rate is 95 per cent and the number of deaths was 355.

The positivity rate during the second wave (as on July 4) is 9.9 per cent, recovery rate is 87 per cent and the number of deaths is 841.