FCI has a total storage capacity of 62,812 MT in Manipur which is sufficient to store six months’ allocations under NFSA. At present, 56,336 MT rice are available in various FCI godowns in the state, FCI regional deputy general manager Gongreipou Kamei said. 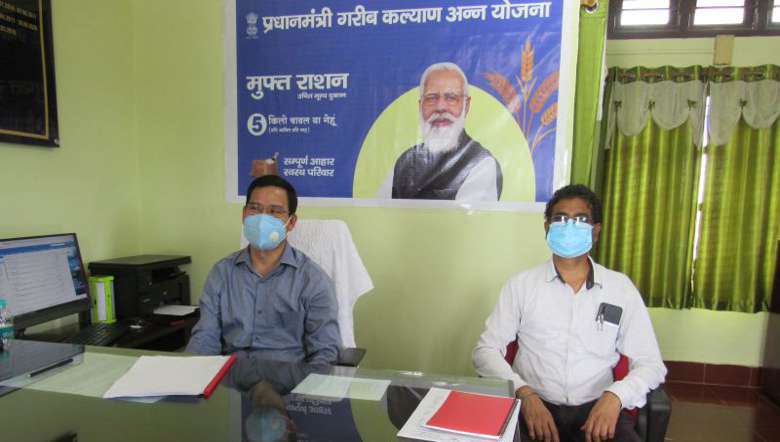 The number of beneficiaries under National Food Security Act (NFSA) has decreased since April 2021 and consequently, allocation of food grains has also lessened due to non-linking of ration cards with Aadhaar card.

The beneficiaries whose ration cards are linked with Aadhaar may be able to draw the ration from any ‘Electronic Point of Sale’ (e-PoS) operated at Fair Price Shops (FPS) anywhere in the country under One Nation One Ration Card (ONORC).

Speaking to the media during a press conference held at his office chamber located at Old Assembly Complex, Imphal on Monday, FCI regional office, Manipur, deputy general manager Gongreipou Kamei said that in order to ameliorate the hardship faced by the poor due to disruption of economic activities caused by the COVID-19 pandemic, the central government has allocated additional food grains free of cost at 5 kg per person per month to all beneficiaries covered under NFSA for the initial period of April to June 2020 under Pradhan Mantri Garib Kalyan Anna Yojna (PMGKAY).

In view of the resurgence of COVID-19 pandemic, the central government has extended the PMGKAY to all beneficiaries covered under NFSA for the months of May and June this year at the same rate. The total allocations for the two months were 18,602 MT which has been fully lifted by the state government as on June 6, 2021. The scheme has benefitted 18,60,159 persons (AAY-1,76,699 and PHH-16,83,460), said Gongreipou.

The PMGKAY has been further extended from July to November and the total allocation of free rice for Manipur for the five months is 46,504 MT worth Rs.13,95,12,000 at the rate of Rs 300 per quintal, he added.

He further said the central government will bear the entire cost on account of distribution of food grains under PMGKAY, including food subsidy, intra-state transportation and dealer’s margin/additional dealer’s margin without any sharing by the state government.

FCI has enhanced movement of stocks during the pandemic and despite lockdown, to meet the additional food grains requirements of the state for implementation of the PMGKAY. Food grains are transported from procurement regions of Punjab, Haryana and Uttar Pradesh to the state through Dimapur and Jiribam Railheads. FCI has a total storage capacity of 62,812 MT in Manipur which is sufficient to store six months’ allocations under NFSA. At present, 56,336 MT rice are available in various FCI godowns in the state, said the FCI regional deputy general manager.