Government can use any land in the state for development purposes: Manipur CM Biren

Chief Minister Biren Singh led the first-ever tree plantation being taken up in a reserved forest area in connection with Van Mahotsav 2021 in the state. 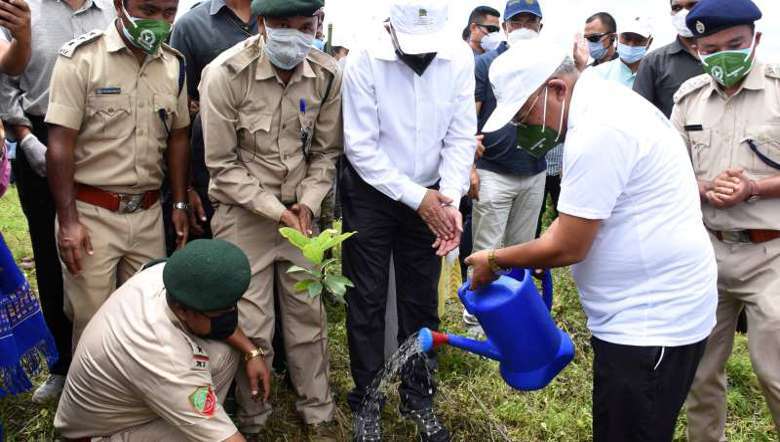 Manipur Chief Minister N Biren on Monday said that every land in the state belongs to the government and it has the authority to use those lands for purposes which are meant for the development and welfare of its people.

The chief minister was speaking during the first-ever tree plantation programme being taken up in a reserved forest area in connection with Van Mahotsav 2021 in the state, organised by the Forest department, Manipur.

The mass tree plantation programme was held at Mangjol Village and Kanglatongbi-Kangpokpi Reserved Forest, Kangpokpi district. Biren led the dignitaries present at the occasion in planting trees during the programme.

During the programme, Biren maintained that every land in the state belongs to the government and it has the authority to use those lands for purposes which are meant for the development and welfare of its people. He appealed to the public to cooperate in the development policies and projects taken up by the government and refrain from thinking that their lands independently belong to them.

“We should not be moved by politically and communally provoked thoughts but should have a mindset of living together with a sense of brotherhood among different communities,” he added.

Appreciating the chief and locals of Mangjol Village for their invaluable support in today’s tree plantation programme, the chief minister said that the programme had been taken up as an initiative to restore the natural environment of the region. Such initiative would help in preventing landslides during the rainy season and also facilitate in storing and supplying water to the village without additional measures from the Water Supply department, he added.

Mentioning that none is authorised to take up any activity, whether construction or destruction, in the Reserved Forest area without the permission of Forest department, he urged the encroachers to stop carrying out any activity in the Reserved Forest for their living and approach the government authority for alternative arrangement. He also instructed the superintendent of Police of the district and concerned authorities to meet those encroachers and make them aware of the schemes and policies introduced by the government for alternative ways of earning without affecting the forest areas.

With regard to COVID-19, he appealed to the public to get vaccinated and cooperate in the government’s fight against the pandemic.

State Forest Minister Awangbow Newmai, while delivering his presidential speech, raised concern on the alarming rate of deforestation in the state. He informed that about 400 square kilometers of forest had been cleared every year and with this rate, the state would lose almost all its forest cover in the near future. He expressed the need for people’s participation in saving forest areas by planting more trees and stopping deforestation as the Forest department could not take up all such activities with its few manpower.

Mentioning that "unless we save ourselves, there is none to save us," the minister appealed to the public to cooperate and support in mitigating climate change due to environmental degradation. He also appealed to stop clearing forests for earning their livelihood but to access certain welfare schemes of the government which are meant for providing a source of livelihood.

Member of Parliament, Rajya Sabha Leishemba Sanajaoba pointed out that large-scale deforestation and environmental degradation must be one of the major factors for certain diseases causing harm to human lives. He stressed on the need to stop unnecessary exploitation of forest and to co-exist with nature by preserving it. He also hailed N Biren Singh for his initiative to develop both hill and valley regions equally and was hopeful that Manipur would surely rise in the path of development with better law and order under his leadership.

The people of Mangjol village expressed happiness on the visit of N Biren Singh to their village and appreciated him for his various initiatives to bridge the gap between the hill and valley regions and other development works taken up for the welfare of hill people. The chief of the village also submitted a memorandum to the chief minister for which the latter assured to look into the matter.