Currently, the delta (and possibly other variants) is fully exploiting two things: our inappropriate behaviour such as crowding and violation of standard preventive protocols and the low rate of vaccinations in most parts of the world. 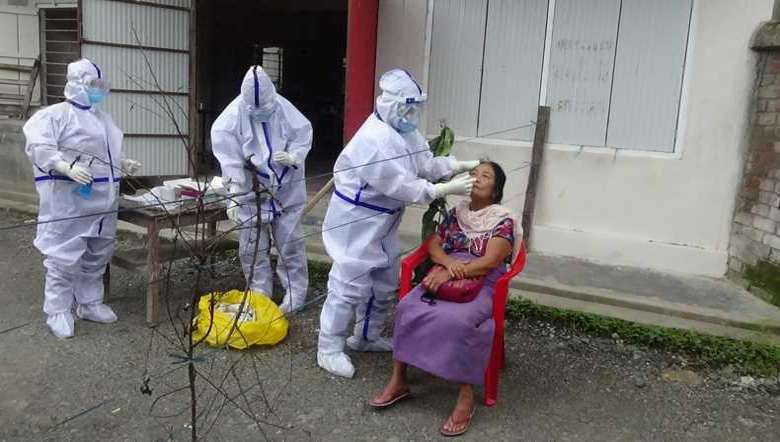 The delta variant (B.1.617.2) is rapidly becoming the dominant strain in the world and has now spread to about 100 countries (India Today Online, July 1, 2021). WHO has warned that this variant will become the globally dominant strain in the coming months, replacing the alpha variant that was spreading in Europe and other parts of the world earlier and other major coronavirus variants. According to the latest figures released by the WHO, alpha variant has been reported in 172 countries, beta in 120, gamma in 96 and delta in over 96 countries. Among these, delta seems to be the most transmissible and is suspected to have triggered the latest surge in COVID cases in several areas including UK, Australia, Indonesia, Bangladesh and many parts of Africa.

WHO further said "SARS-CoV-2...will continue to evolve, with selective advantage generally favouring more transmissible variants. The emergence of new variants requires constant evaluation and careful adjustment of public health and social measures and vaccination strategies as the Covid-19 pandemic continues." Dr Tedros Ghebreyesus, DG, WHO warned that the world is in a very dangerous period of the COVID-19 pandemic compounded by more transmissible variants like Delta, and pointed out that "in countries with low vaccination coverage, terrible scenes of hospitals overflowing are again becoming the norm (The Hindu, July 3, 2021)." He said that traditional protocols such as strong surveillance, strategic testing, early case detection, isolation and clinical care remain effective against delta and other dangerous variants. These public health measures must be backed by individual and community-level appropriate behaviour such as masking, physical distancing, avoidance of crowded places and keeping indoor areas well ventilated.

The WHO chief urged the world leaders, including vaccine companies to equitably share protective gear, tests, oxygen, treatments and vaccines and work together so that 70 per cent of all people in every country are vaccinated as soon as possible.

Currently, the delta (and possibly other variants) is fully exploiting two things: our inappropriate behaviour such as crowding and violation of standard preventive protocols and the low rate of vaccinations in most parts of the world. Examples of recent events that may become super-spreaders include Euro 2020, Wimbledon 2021, Tokyo Olympics and other crowding events.

Due to surging Delta and inappropriate behaviour, though the second wave is declining in India, a new Covid wave is taking place in many parts of the world. Many countries and regions are imposing new restrictions to curb the rise in infections. These include the UK (surprisingly, with high vaccination rate), Russia, Israel (surprisingly, with high vaccination ratio), Indonesia, NSW region of Australia, Bangladesh, and parts of Africa especially South Africa (average vaccination rate in Africa, less than 1 per cent). The Delta variant is the most transmissible; to stay alive, it continues to adapt, mutate, evolve and change in a tricky manner (the Los Angeles Times, online edition, July 1. 2021).

According to Anne Rimon, UCLA epidemiologist, "....an infection anywhere is potentially an infection everywhere." South Africa has imposed fresh restrictions on June 28, 2021 due to a sudden rise in the number of cases, possibly caused by the Delta variant (less than 1 per cent population in South Africa has been vaccinated). Indonesia launched fresh curbs on July 2, 2021 to control the worst outbreak since the start of the pandemic. New daily cases have shot up above 20,000-more than 4 times higher than a month ago. Hospitals in Jakarta are near full capacity and there are growing fears that the country may face acute oxygen shortage soon. Australia has also imposed new lockdowns as the Delta variant began to spread in the continent especially in Sydney and other parts of New South Wales (NSW). Australia also has a low rate of vaccination (about 11 per cent).

As a virus infects a human cell and reproduces (replicates), mistakes may occur in copying of its genetic material. This is called a mutation and the virus carrying that mutation may be called a mutant, a variant, a strain or a lineage depending upon various conditions. Often, the mutation may be inconsequential. That is, the variant mayn't change its contagiousness, deadliness or capacity for vaccine resistance. However, in certain circumstances, the mutant may become more infectious, or cause more severe disease, lead to more fatalities or acquire vaccine resistance. In that case, the mutant may become a variant of interest (VOI) or variant of concern (VOC), e.g. Delta. If the global population isn't uniformly vaccinated and large parts remain hotspots of infections, then the virus would have a good chance of producing more variants including dangerous variants such ad Delta which triggered the costly end wave in India recently and is now triggering new waves in several parts such as Australia, UK, Indonesia, Russia and possibly parts of Europe. It's high time that the world leaders work in concert to enhance vaccinations especially in low-vaccinated countries such as those of Africa.

WHO is now keeping track of various circulating variants such as the following (TOI, June 29, 2021):

-Lambda (C.37): First discovered in Peru, is now reported in about 29 countries; has many mutations in the spike protein that may make it more transmissible. Now, it's also found in the UK. However, for now, PHE has classified it as a VOI.

- Kappa (B.1.617.1): First reported in India, has a combination of E484Q and L452R, that may potentially make it more transmissible as well as partly vaccine-resistant.

Effectiveness of Vaccines against Delta Variant

Among all the variants, delta seems to be the most virulent so far. Studies have indicated that this Covid variant reduces the neutralizing antibody levels triggered by various SARS-CoV-2 vaccines (HT online, July 2, 2021). It's reported that Delta reduces antibody levels elicited by several COVID vaccines to various extents: Pfizer, 7-10 fold; Moderna, 7-10 fold; Covaxin, three fold; and CoviShield/AstraZeneca, two fold. One must, however, note that neutralizing antibody is just one aspect of our body's immune response. There is another part called activated immune cells (cell-mediated immunity), including memory T and B cells residing in bone memory for prolonged periods which can quickly mount a good immune response once they "see" an antigen (e.g. a coronavirus) that they have encountered before.

However, we need more robust data from peer-reviewed studies to clearly settle the effectiveness of vaccines against mild or symptomatic infections; against hospitalizations or possible deaths. At the moment, three or four things are in our hands (both government and common people): Covid-appropriate behaviour, genomic surveillance of Covid variants, ramping up vaccinations on war footing and scaling up healthcare infrastructure in view of a possible third wave.

One thing is sure, if a large percent of the population is partly/fully vaccinated, the third wave would be either prevented or postponed; or much milder, shorter, less contagious or deadly, even if the third wave comes eventually. A heartening development is the claim made by Dr N K Arora, NTAGI Chief, who quoted a study done by CMC, Vellore indicating that CoviShield vaccine had 61 per cent efficacy with one does and 65 per cent with 2 doses (Deccan Herald, June 17, 2021). However, more detailed peer-reviewed studies are needed to ascertain if CoviShield provides adequate protection against Delta with just one dose or not. A new study by Public Health England (PHE) has shown that 2 doses of AstraZeneca (CoviShield in India) vaccine are 92 per cent effective against hospitalization due to the Delta variant and showed no deaths among those vaccinated (Free Press Journal, online edition, June 23, 2021).

It's quite clear now, based on data from various studies, that vaccinations protect you from SARS-CoV-2 virus including dangerous variants such as Delta. Yes, delta and other highly transmissible variants may infect even fully vaccinated people. But the disease in vaccinated people would be much milder and less fatal. That is, most vaccines would prevent hospitalizations and deaths resulting from coronavirus infections including those by Delta. So, it's urgently warranted to ramp up vaccinations across the world including India and Manipur. The best strategy would be how to increase single jabs in the maximum fraction of the population and how to administer 2nd shots to the elderly, co-morbid individuals, and other priority groups such as mothers of young children (say, below 11 years of age). If vaccines are available and if we can address vaccine hesitancy, the best approach would be to fully vaccinate 70-80 per cent of the population as soon as possible. This would create a vaccine wall against Delta or other risky variants and help achieve herd immunity in the near future.

According to the eminent science writer and columnist, Ed Yong (The Atlantic, July 1,2021), has highlighted three key principles that may help us understand the interactions between vaccines (three billion doses already delivered globally) and the emergence of super-transmissible variants such as Delta:

- Vaccines still work against the variants:That is, vaccines can blunt the sting of the variant; however, one must be wary of long covid cases in certain individuals with recovered from mild symptoms, due to vaccinations.

- The longer Principle No. 2 continues, the less likely No.1 will hold: That is, the longer the pandemic continues, the better are the chances for the coronavirus mutating and the rise of more dangerous variants. Ultimately, vaccine escape mutants may emerge and the currently available vaccines would no longer work; we would then have to go back to the drawing board and design new editions of variant-specific more effective vaccines.

Therefore, containing the pandemic throughout the world, genomic surveillance, continued monitoring of relaxations/restrictions, continued adherence of appropriate behaviour and ramping up vaccinations, addressing vaccine hesitancy, sharing of vaccines by rich with poor countries and resolution of vaccine inequity through global agencies such as WHO, Covax, GAVI and UNICEF etc. are urgently warranted to prevent the further rise of new concerning Covid variants

Certain measures would help prevent, ward off, or mitigate the third wave. One is to massively speed up vaccinations. Another is aggressive genomic surveillance to monitor the trajectory of delta and other COVID variants across the country to ascertain which variant is surging where and catch any new variant early before it leads to a deadly local outbreak. R. Sukumar, Editor-in-Chief, Hindustan Times has another two interesting suggestions (HT, June 3, 2021). One is to link the stringency of standard SOPs (3 Ms, 3 Ws, as mentioned in previous columns) in a district to the ratio of the population that has been vaccinated. Another is about deciding when and where to ease lockdowns; he suggests a possible benchmark: 5per cent positivity rate or less for two weeks combined with vaccine coverage of a minimum of 20 per cent of eligible population (18 years and above) to permit easing of restrictions in any locality.

- Speeding up vaccinations in a big way.

- Genomic sequencing of a subset of positive cases and surveillance of the variants including the delta variant: which COVID strains are there in Manipur, where are they, and where are they moving towards.

- Strengthening of healthcare infrastructure such as construction of new COVID hospitals.