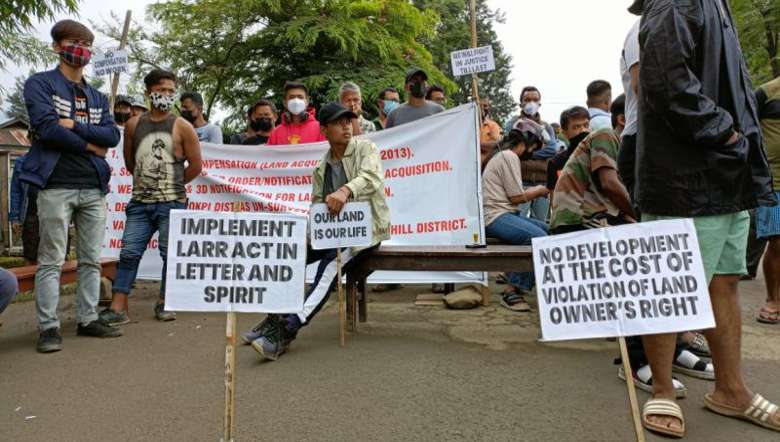 The 24-hour total shutdown imposed by the ‘Asian Highway Land Affected Chairmen/Chiefs Association’ along with various student bodies including TSA Sadar Hills and AMGSU was called off on Friday around 5 pm.

AHLAVCCA decided to call off the total shutdown following an assurance from the Chief Minister’s Office and the local MLA Kangpokpi assembly constituency Nemcha Kipgen.

With the personal assurance from chief minister and MLA Nemcha Kipgen to settle the issue of land acquisition along the NH-2  latest by July 5, the association, in good faith called the bandh, said secretary AHLAVCCA Semson Kipgen.

He said that the association will take more stringent forms of agitation in case the chief minister and the government fail to bring an acceptable solution to the issue.

Meanwhile, AHLAVCCA conveyed gratitude to all the civil bodies and student bodies including All Manipur Gorkha Students' Union Manipur and Thadou Students' Association Sadar Hills for their support and cooperation.

Earlier before the shutdown was called off, volunteers in large numbers were seen blocking the highway at Kalapahar and Gamgiphai enforcing the shutdown. The protestors displayed a giant banner with slogans which read ‘We want fair compensation (Land Acquisitions Act, 2013)’,  ‘Scrap/nullify 3A and 3D order/notification for land acquisition’, ‘We reject 3A and 3D notification for land acquisition’, ‘ Declare Kangpokpi district as un-surveyed land’, ‘Valley district administration has no authority on the hill District’, ‘No justice no work on NH-2’.

Despite the lockdown owing to the pandemic, a large crowd of land affected victims congregated at Kalapahar and Gamgiphai, helping the volunteers enforce the total shutdown.

Kangpokpi police under the supervision of newly posted IPS Karthik Malladi gave efforts to control the crowd. However, a confrontation erupted at Kalapahar with the arrival of ADGP Ashutosh Kumar Sinha with additional forces from Imphal including commandos. The ADGP allegedly lathi-charged the bandh volunteers including women protesters.

One Reuben Shankar, a land affected victim from Kalapahar said that the government policy of forcefully snatching away their land for expansion of the highway will not work as they will never give even an inch of their land unless their rightful demands are fulfilled. He urged the state government to fulfil the demands of the AHLAVCCA.

At Gamgiphai, Helen Kipgen maintained that all peaceful approaches had been neglected by the state government, compelling them to take extreme steps.

Helen urged the state government to immediately look into the matter and resolve the issue sooner while adding that the highway expansion issue could escalate if not solved early.

He further said that more intense forms of agitation including an economic blockade will be imposed if all the previous orders and notifications of the government in connection with the land acquisition are scrapped or nullified, and fair compensation is paid to all the affected victims.

A woman protester at Kalapahar said that the total shutdown was very peaceful until additional security forces from Imphal came and dispersed them in a rude manner.

Chongpi from Keithelmanbi said that nothing went wrong until ADGP Ashutosh Kumar Sinha along with commandos and state police came and lathi-charged them; even the women protestors were not spared.

“I am also one of the victims among many others. The ADGP was not in uniform while on duty. Such uncivilized character on the part of a high-ranking police officer is never expected,” she added.

She appealed to the authority concerned not to send such police officers to monitor and control the crowd in the future to avoid misunderstandings.

The ADGP himself and the security personnel were seen dispersing the crowd by resorting to lathi-charge at Gamgiphai and Kalapahar. The womenfolk at Kalapahar also stormed the security forces demanding an apology from the ADGP.

Later, the ADGP tendered an apology to the women protestors for lathi-charging them.