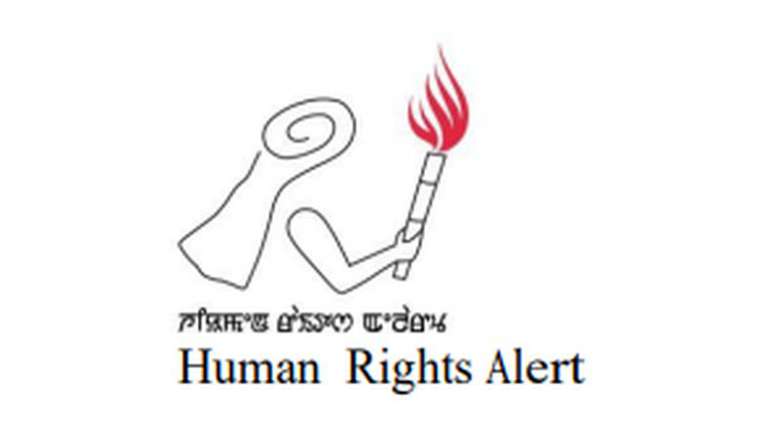 The Human Rights Alert (HRA) on Friday drew the attention of the Manipur Human Rights Commission (MHRC) for a probe into the alleged custodial death of two Myanmarese women in Churachandpur district.

The HRA sought the MHRC attention on the findings of an inquiry it had conducted on Thursday, into the alleged custodial death of the two Myanmarese women who were kept in judicial custody at Saadbhavana Mandop (hereinafter referred to as the Centre) at New Lamka in Churachandpur district.

An FIR No 38 (03)2021 CCP.PS under section 14 of Foreigners Act was registered against them, it stated. When they were produced before the Chief Judicial Magistrate, Churachandpur, the same day, it was recorded that they “crossed over the border due to the threat and fear of persecution as a result of the military coup, and that their life had been endangered. Therefore, they escaped and crossed the border without any valid documents and papers.”

They were nevertheless remanded in police custody till April 7, it added.

Meanwhile, the Government of Manipur declared the Centre as a temporary prison under Prison Act, 1984 vide its order No: 6/1(1)/2021-H (DC) dated April 1, HRA stated.  After the 29 accused persons were produced on April 7 before the Chief Judicial Magistrate, Churachandpur, 28 of them were remanded in judicial custody and kept at the Centre. A juvenile, amongst them, was transferred to an Observation Home, at Ramthar Village, Churachandpur district. But the separated juvenile rejoined the group in the Centre shortly with due permission from the Chief Judicial Magistrate, HRA stated.

“The plan of the Government of Manipur, to transfer the 29 Myanmar nationals to different jails in Imphal scared them as they think that it will separate the families into separate men, women and children’s jails. The prospect of living amongst the population where they cannot speak the same language and do not understand the culture disturbed them a great deal. So, they requested the authority to allow them to continue to stay together at the Centre,” it mentioned.

Civil bodies such as the Zomi Youth Association and Zomi Mother’s Association of Churachandpur district also volunteered to provide them basic food so long as they are in Churachandpur. “The state government authority conceded to their request but did not provide them with any food or health care,” HRA alleged.

It stated that by the end of May and beginning of June many of the inmates of the Centre felt sick. “They requested for medical help, but it was felt on deft ears. Only on June 5, some medical personnel came and checked their health conditions. Nine of them were found to be Covid positive,” HRA stated. Two of them were in critical condition and immediately admitted to District Hospital (Covid Isolation Ward). One of them, Ma Myint daughter of Usan aged about 46 years died on June 6. Her condition was said to have worsened after being admitted to the hospital. Two days later, on 8 June, Mukhai daughter of Nita aged about 40 years also succumbed, in the same hospital, HRA added.

HRA further stated that a total of 13 more inmates of the Centre were also found to be Covid positive and they were shifted to a designated Covid care centre at Churachandpur Government College for treatment on June 7. After testing negative, they returned back to the Centre on June 16, 2021, it added.

HRA pointed out that the death of Ma Myint and Mukhai occurred after they were arrested and kept in the custody of the state for three months.

“During the period in custody, the inmates were not provided food by the state, but depended solely on the charity of civil voluntary organisations. In doing so, they were deprived of their right to adequate nutritious food. Moreover, they were also deprived of the mandatory medical attention they deserve as any other prisoner. Even when they fell sick and were desperately calling for help, the help came only when the situation became out of control. This systematic deprivation of the right to food and right to health in state custody during the pandemic, ultimately causing the death of two of them, is nothing short of custodial violence,” it stated.

It is in violation of the Right to Life enshrined in Article 21 of the Constitution of India available to ‘all persons’ including the ‘non-citizens,’ it stated. Therefore, HRA seeks MHRC to ensure the inmate of the Centre is provided with adequate nutritious food as well as regular medical attention as per the standard norms of any prison or designated prison without any discrimination.

It further sought to ensure the NHRC Guidelines on Custodial Death is strictly adhered to while dealing with this case – including the mandatory reporting to the secretary, NHRC as well as the Magisterial Inquiry into the incident by a Judicial Magistrate.

HRA stated that it recommends the Government of Manipur to grant an interim compensation of at least Rs 20 lakh each to the next-of-kin of the deceased Ma Myint and Mukhai.