Due to gradual felling of trees for various purposes, the Lamdeng forest was completely cleared and people faced hardship due to the impact of deforestation. 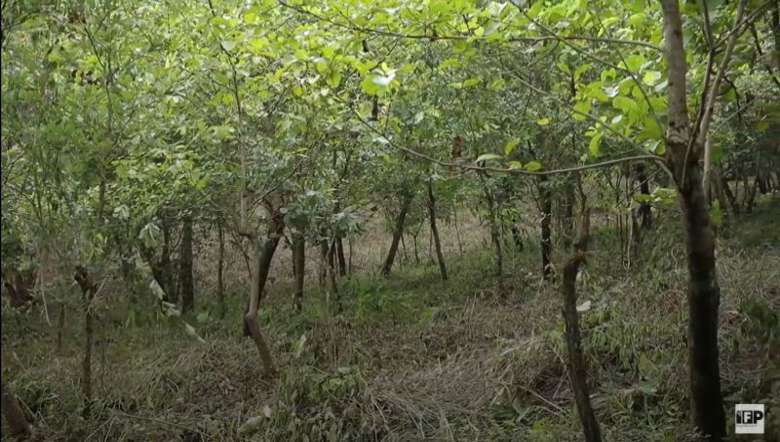 Lamdeng forest, which is a part of Langol hill range in Manipur, is now lush green and well forested. The rejuvenation of the highly degraded Lamdeng forest by local communities has eased the problem of water woes faced by the people living in and around the place for the past couple of years.

Lamdeng is situated around 11 km away from Imphal City near the Langol Hill Range, a reserved forest.

The Langol Hill Range area towards Lamdeng was highly degraded due to various factors. The local people suffered the consequences of the damages to the forest caused by felling of trees. Mudslide, water shortage and rise in temperature are some of the problems faced by the people due to deforestation.

Lamdeng shares close proximity to Singda Dam where most of the tap water is supplied in valley areas. Majority of the people of this semi-rural area do not have access to tap water connection. However, with the renewal of this forest in the past four years, they started enjoying clean fresh water that runs off from the forest throughout the year.

"The impact of deforestation such as mudslide, water shortage and rise in temperature made them to conserve and restore the forest with the belief that it would benefit all and the future generation," one Khundrakpam Tombi Meitei told Imphal Free Press when asked about the reason of taking keen interest in forest conservation in Lamdeng area.

Tombi, who is in his 70s now, played an important role in rejuvenating the forest.

Due to gradual felling of trees for various purposes, the Lamdeng forest was completely cleared and people faced hardship due to the impact of deforestation.

"It was destroyed to such a level that I can even count the number of cows moving in the forest while standing at the foothill. During the rainy season, the road along the hill range was not commutable due to heavy mudslide coupled with rise in temperature in surrounding areas of Lamdeng," he pointed out.

Later the association was approved by the forest department and termed as "Joint Forest Management Committee Lamdeng Makha Leikai" in 2006. Since 2007 with the support of the forest department, tree plantation has started in full swing and so far around 110 hectares of land has been recovered, he recalled.

Today, the forest has started refunctioning as "lungs" of Lamdeng people and become a source of income as well.

"I was a farmer by profession. Being indebted to the renewal of this damaged forest, I quit and sacrificed my life from last nearly two decades in safeguarding this forest along with some like-minded people of Lamdeng Makha Leikai. I gained nothing from this except keeping my health fit. But nowadays we started getting some income by selling medicinal leaves and fruits that are found in the forest. We also rear silkworms and sell felled trees as firewood," he stated about the sustainability of the forest.

He further said that the most challenging thing that they faced while preserving the forest was to prevent the forest from setting on fire by unknown miscreants, hunters etc. However, with the support of the forest department, such practices were controlled to a great extent for the past three years.

"As I crossed 70 years and after some years we seniors may not be able to put the same effort to safeguard this forest. We want the present generation to continue this activity in full swing. We hope they will perform better as they are more educated than us," Tomba said.

In an interaction with the Imphal Free Press, Range Officer, Sadar West, Langol under Central Forest Division Mantripukhri, Nandeibam Mobi Singh said that Langol Hill Range at the side of Lamdeng was destroyed to extreme level as such all the stream and spring was dry up for so long.

With the rejuvenation of the forest, three water reservoirs were constructed four years ago in three different places of Lamdeng to store water that runs off from the forest. These reservoirs are playing a great role in mitigating water issues in this place as the springs are, today, producing enough water. During the pre-monsoon or post-monsoon period, on an average of one cubic per hour of water is harvested in those places, he said, adding maximum people rely on this water storage tank and give up using hand pumps.

Many wild species have also started getting shelter in this forest, he added.

Manipur is among the top states with a high percentage of forest cover with 75.4 per cent of total geographical area as per Indian State of Forest Report (ISFR) 2019 under the Ministry of Environment, Forest and Climate Change. The state is endowed with enough rainfall of 1518.36 mm as per information received from the directorate of Environment and Climate Change, Manipur which is above the national average of 1200 mm. But the state has been facing shortage of water in most of the seasons. According to the ISFR 2019 report, Manipur suffered the highest loss of forest cover with 499 square km followed by Mizoram with 180 square km.

In view of the consequences of deforestation affecting the lives of people, it is high time for all to learn some lessons from places where forest restoration is being actively taken up.

Watch: How a 70 year old man is leading a community in rejuvenating Lamdeng forests