Police carried out a crackdown on selling of distilled indigenous country (DIC) liquors at various places in Imphal East and Imphal West. 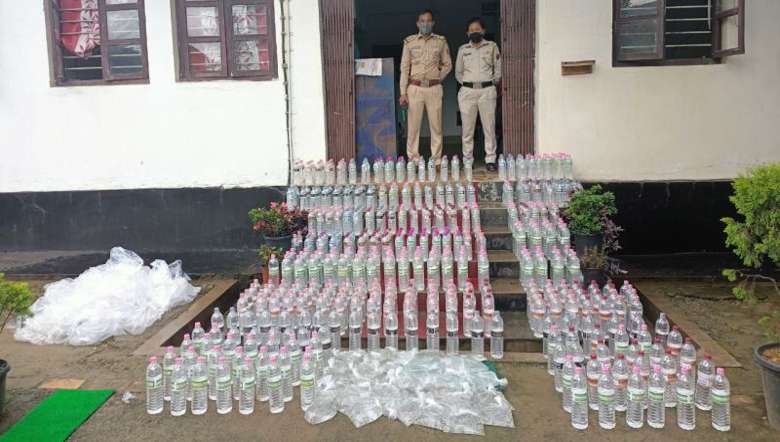 In continuation of liquor drive conducted by Manipur police, a total of 604.5 litre of distilled indigenous country (DIC) liquors were seized from various places of Imphal East and Imphal West districts on Tuesday.

A team of Porompat police led by its officer-in-charge, M Binodkumar seized 150 litre of DIC liquor from Wangkhei Ayangpalli and Mahaballi areas. The liquors were seized from the possession of one Loitongbam Manju Singh, 46, son of L Modhu of Wangkhei Ayangpalli and Elvis Kamei, 20, son of Paujagai Kamei of Mahaballi. They were detained and handed over to the Excise department, Lamphel along with the seized liquors. The drive was conducted under the supervision of Imphal East SP, N Herojit.

Meanwhile, a team of Patsoi Police Station seized 457 bottles (500 ml each) including large plastic packages of DIC liquor during frisking and checking at Ngairangbam Maklang IVR at around 3.45 am.

According to police, while conducting frisking and checking at the spot, one four wheeler (Mahindra Bolero) bearing registration number MN01AG 6938 (white in colour) was stopped. On examination the said DIC liquors were detected from the vehicle and the person, who drove the vehicle, identified as Khwairakpam Thouba Singh, 29, son of (Late) Kh Thambal Singh of Tairenpokpi Ching Taba, PO Langjing PS was detained. Later he along with the seized liquors was handed over to Excise, Keithelmanbi.

Moreover, 140 litre of DIC liquors were seized from Lambulane and North AOC areas by a team of Imphal Police Station.

Another team of Imphal West district commandos led by sub-inspector B Amarjit Singh recovered 86 litre of DIC liquors packed in 48 bottles (1 litre each) and 52 bottles (500ml each) from Mayaikoibi area, Imphal West.