CAU Imphal VC Premjit said that coconut trees can be successfully planted in the state both in the hill and valley. 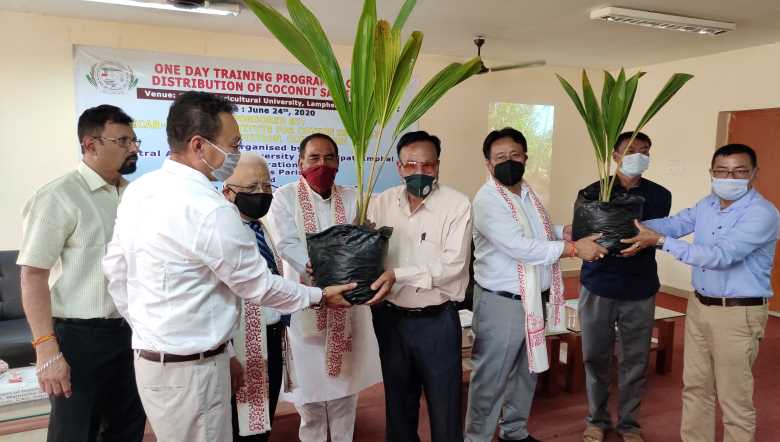 Coconut, which is highly suitable in hot and humid places, can be successfully planted in Manipur to withstand the impact of global climate change in the state, Central Agricultural University (CAU), Imphal, vice-chancellor, professor M Premjit Singh has said.

Speaking as function president, Premjit said that coconut trees can be successfully planted in the state both in the hill and valley amid the rise in temperature. As such, coconut plantation can be adopted as an adaptation strategy to withstand climate change impact by farmers in the state.

The VC further said that farmers can generate good income by cultivating coconut trees. It is one of the most essential components in the cultural and ritual ceremony of Manipuris, particularly for the Meitei community. Also, around 25 value-added items can be made from coconuts, he added.

With an objective to bring a coconut revolution in the state, the programme is being organised. For the first phase, 5,000 coconut saplings will be distributed and will target hill districts which are economically downtrodden. Of the total sapling, 4,000 will be distributed to Kwatha, Kwatha Khunou and Satang of Tengnoupal districts and Sadu Chiru, Kangpokpi district, he informed.

The chief guest of today’s function, national vice president (NE), Bharat Vikas Parishad, professor Sinam Rajendra Singh said that agriculture is the mainstay of the state. Every section or class of society depends on farmers but they usually hesitate to introduce themselves as farmers, he stated.

“Due to lack of support and cooperation, the maximum number of farmers remain poor and unable to increase their status. Therefore till date, the people are still unable to recognise farming as one of the noble jobs. It is high time to remove this wrong perception,” he added.

As a part of the programme, sprayers were also distributed to farmers.