Speaking to the Imphal Free Press, a member of Pengkul project DJ Haokip said, “The project is a message, a clarion call on the youths of today to safeguard our dying culture, traditions and rituals.” 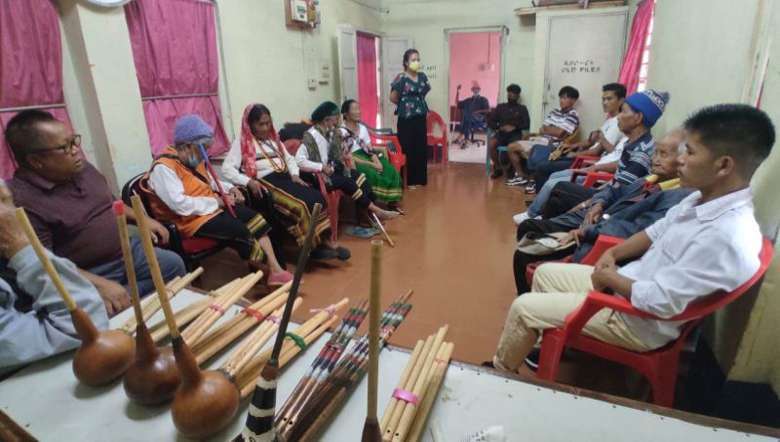 To protect and promote one’s cultural heritage and traditions, a group of likeminded Kuki youths have come together to revive the endangered musical instruments, songs and dances of their tribe.

The team started a project called, ‘Pengkul project’ and visited different parts of the state in search of experts having technical know-how of the instruments, the songs and dances.

They engaged the experts to give hands-on training to youths who are taking part in a training organised by the team under the said project at Kuki Inpi complex, Churachandpur.

According to the team, the name of the project, ‘Pengkul project’ has been named after ‘Pengkul’ a traditional trumpet made of bamboo used by the Kuki tribe.

Speaking to the Imphal Free Press, a member of the project DJ Haokip said, “The project is a message, a clarion call on the youths of today to safeguard our dying culture, traditions and rituals.”

The musical instruments such as Lhemlei, Gosem and Pengkul are associated with the folktales of the Kuki tribes. They are not just an instrument but an identity for the Kuki tribe, he added.

It is a big concern, seeing that only the old folks will be performing the musical instruments in the festivals such as the Chavang Kut, a post harvest festival of Chin Kuki Mizo community which is celebrated every year, he said.

Haokip further added that there had been hardly any instances wherein the youths are seen performing the musical instruments in such festivals. Instead, the recorded sounds of such instruments are used.

Haokip said, “The youths today are more interested in rock music or other western music, leaving behind our very own unique musical instruments.” He also expressed disappointment that many experts had also passed away before the project began.

One participant, Jacob Touthang said, “Our ancestors used to preserve the traditional dances, songs and musical instruments. But in the present situation, there is a possibility that all of these will be forgotten.”

The Kuki tribe has unique musical instruments and therefore, it is disheartening to see that all such unique instruments will gradually disappear from the modern world.

Jacob said, “It is not an easy task to learn all the techniques but I am trying my level best to learn them.  After taking part in the project, I have gained some technical knowledge to make and play those musical instruments.”

As the younger generations have missed the opportunity to learn from many elders who had passed away, they must now strive harder to learn as much as they can from the old folks who are still alive today, he said.

“The youths must not wait for the elders to teach them. Instead, they must approach the elders.  Even after the training, the trainees should also try to acquire more techniques and knowledge so that they will be in a position to teach others as well,” said Jacob.

One of the teachers in the training said the Kuki tribe has lost its culture under the influence of modernisation. Tunes of the present generation are mostly influenced by the western music, the teacher said. She also expressed satisfaction that such training programmes have been organised by the youths.