The stretch of National Highway-2 at Khongnem Thana, Senapati were affected by a landslide in 2020. 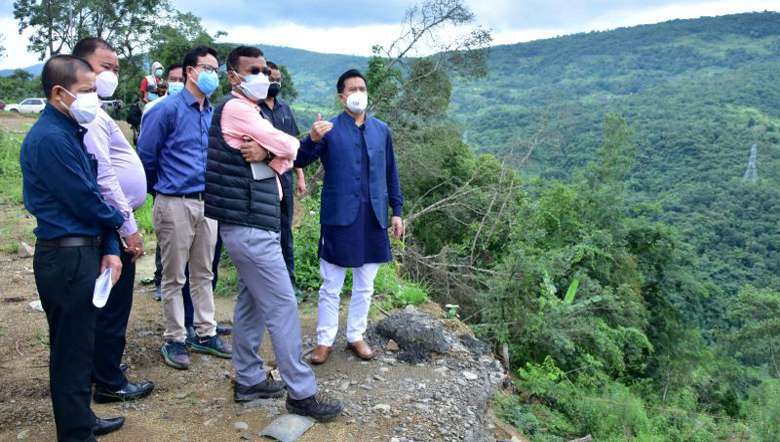 Works Minister Thongam Biswajit Singh on Tuesday inspected the stretch of National Highway-2 at Khongnem Thana, Senapati that were affected by a landslide in 2020, and assured to release the compensation amount at the earliest for the families affected by the new road alignment for restoration of the national highway stretch.

Speaking to the media at the site, the minister said that any form of agitation during the present pandemic will cause undue sufferings for the people. He said the government will compensate the affected families at the earliest to facilitate them to shift to a suitable location. The minister also met the village chairman and members of the affected families and heard their grievances.

The minister further urged the public to support the government in its endeavour to bring equal development in the state. He said the government has opened its door wide open for the public and further called for constructive criticism instead of spreading negative criticism. He further appealed to the public of Senapati district to make the ongoing COVID-19 vaccination a success by coming out in large numbers.

During the visit, he was accompanied by additional chief engineer, National Highway, PWD Y Joykumar and the officials concerned.  The team also visited the temporary settlement area of the affected families at Khongnem Thana Community Hall. It may be mentioned that a landslide occurred at Khongnem Thana Village along NH-2 on October 23, 2020.