Manipur to telecast ‘Keidaubei Kidoino’, a shumang leela based on COVID-19

The full rehearsal of the play was showcased on Tuesday in the presence of DIPR director H Balkrishna at Iboyaima Shumang Leela Shanglen, Palace Compound. 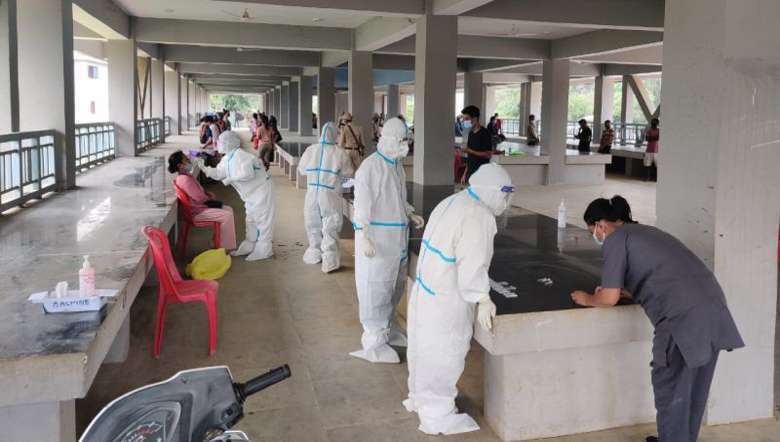 A shumang leela (courtyard play) based on COVID-19 pandemic called ‘Keidaubei Kidoino’, produced by Directorate of Information and Public Relation (DIPR) will be telecast soon in Manipur.

The full rehearsal of the play was showcased on Tuesday in the presence of DIPR director H Balkrishna at Iboyaima Shumang Leela Shanglen, Palace Compound.

The initiative to produce the play was taken under the supervision of Chief Minister N Biren Singh with an objective to create massive awareness about the ongoing pandemic and to fight it with courage and bring normalcy in the state soon.

The script of the play is written by Ranjit Ningthoucha and directed by Sangeet Natak Akademi Award winner, Sougrakpam Hemanta.

During the rehearsal, H Balkrishna said that creating massive awareness about COVID-19 and ways to combat it is the only effective means to control its spreading. Shumang leela being one of the simplest tools and interesting medium to attract the viewers and listeners, this public awareness play is going to be presented.

He further said that the play would surely help to clear so many doubts about this virus and also sub-side the fear of this pandemic. The play will be telecast in most of the TV channels of the state.

"Let people enjoy the play and make use of it following the important message that it conveys through it," said Balkrishna while appealing to the people of the state to control their fear, clear their doubts about the virus and follow strict SOPs to defeat the pandemic.

Sougrakpam Hemanta said that even if this pandemic brings a lot of setbacks in the society, many experts and scientists are putting their best efforts to end this disaster. As such people should not lose their hope and rather fight the disease by strictly following SOPs and get vaccinated without fail.

"We expect that people will surely make this play purposeful and realise the significance of this traditional medium called shumang leela", he said.