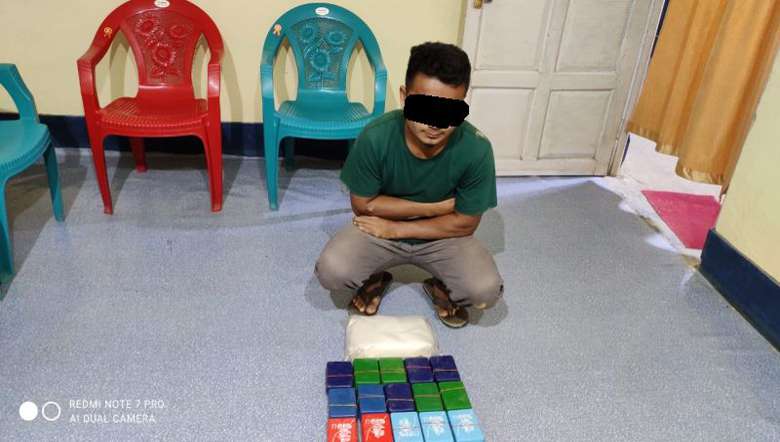 Churachandpur police arrested a man around 7.45 pm on Monday for transporting heroin No.4 from Moreh to Churachandpur district.

According to police, reliable information was received that one individual would be transporting heroin No.4 powder from Moreh to Churachandpur in an EECO van, and deliver the drugs at B Mualhoih Veng near Mission Veng. Soon after two police teams led by inspector N Thangzamuan under the supervision of additional SP Lawrence K Munluo and SP Shivanand Surve rushed to the said area and looked for the person along with the vehicle.

While checking the areas in B Mualhoih village, the police team entered a house and found five persons having drinks. Among them, one person who identified himself as Jangminlun Mate, 23, son of Sonpao Mate of Nabil village, Chandel district, presently at Moreh ward no.9, disclosed that he had transported 15 soap cases and one plastic packet of heroin No.4 powder. He said that the drugs were concealed in the fuel tank of the EECO van bearing registration number MN07E0105 which he had parked at Demmang Veng, Tuibuong, said the police sources.

On further interrogation, Jangminlun revealed that the heroin No.4 was given to him by one Seiminthang Baite of Moreh. Then the police team immediately rushed to Demmang Veng along with the accused person and recovered the Eeco van and brought it to Churachandpur Police Station. The 15 soap cases and one plastic packet containing suspected heroin No.4 powder were recovered from the fuel tank of the vehicle. The suspected heroin powder weighed around 586 gram, it added.

Jangminlun was then arrested and the suspected heroin No.4 powder along with one mobile phone and the Eeco van were seized by observing formalities. A police case under FIR No.70(6)2021 CCP-PS u/s 21(C) ND and PS Act has been registered and further  investigation is going on to arrest the other person who gave the drug consignment, said the police sources.