In the past few days, parts of Manipur have witnessed eruption of violence and altercation between those staying in quarantine centres and frontline workers owing to several reasons, including delayed test results and long quarantine days. 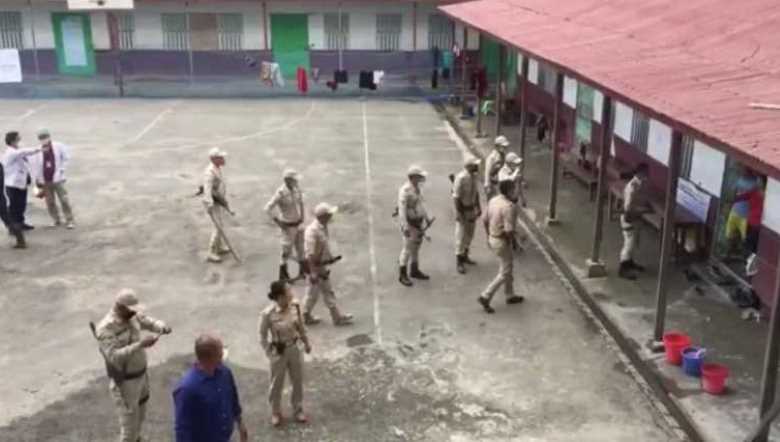 Manipur Police team at a quarantine centre to help pick up a Covid-19 patient in Churachandpur district on June 24, 2020 (PHOTO: IFP)

A struggle between the law enforcers and the people staying at a quarantine centre in Churanchanpur district of Manipur took place after the latter blocked the police from carrying out their duties, sources said

A video footage of the incident in which police personnel were seen as allegedly going on a rampage at VK Tawna High quarantine centre went viral on Wednesday evening.

According to the sources, the said quarantine centre had one COVID-19 positive patient. When the medical team came to pick up the patient, they were not allowed to get inside. The inmates allegedly locked the room and were not cooperating with the medical team even after repeated requests made by the police team.

Meanwhile, a source said the police received information from the medical team at about 9.50 am that the inmates at VK Tawna High quarantine centre were not allowing the medical team to pick up the positive inmate for treatment at the isolation ward.

Efforts were made for about 30 minutes trying to convince the inmates.  While the inmates refused to come out and did not allow any representative to talk with the police and the medical team, the ASP (law and order) also reached the spot and tried to convince them.

Finally, the police and medical team instructed the ground floor people to make way for getting the positive client outside. Everyone started coming out on the balcony and prevented the authority from performing their duties.

In this regard, a legal process has been taken up to identify the main instigators and take necessary action as per relevant section of the law.

Several parts of Manipur have witnessed eruption of violence and altercation between those staying in quarantine centres and frontline workers in the past few days owing to several reasons, including delayed test results and long quarantine days.