It's imperative for those who got one shot to have the second jab as soon as possible. Those who haven't been vaccinated must get at least the first jab as soon as feasible. 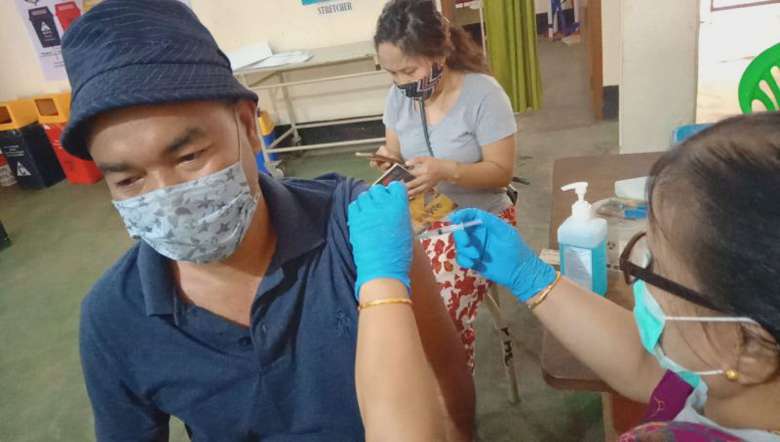 According to the US Centers for Disease Control & Prevention (CDC), there are three (3) major classes of Coronavirus variants (www.cdc.gov/; last accessed, June 26, 2021; Indian Express, May 2, 2021):

As per Public Health England (PHE), if the variants of SARS-CoV-2 are suspected of having worrying epidemiological, immunological or pathogenic properties, they are selected for further investigation. At this stage, they are referred to as Variants under Investigation (VUI). For example, the variants emerging from the so-called 'double mutant' strain (first indentified in India, the B.1.617 lineage) was first dubbed as VUI: VUI-21APR-01, VUI-21APR-02, and VUI-21APR-03). But the CDC will then classify the VUIs as VoI, VoC, or VoHC, based on their properties.

The CDC defines a VoI as "A variant with specific genetic markers that have been associated with changes to receptor binding, reduced neutralization by antibodies generated against previous infection or vaccination, reduced efficacy of treatments, potential diagnostic impact, or predicted increase in transmissibility or disease severity." On the other hand, a VOC is defined as "A variant for which there is evidence of an increase in transmissibility, more severe disease (e.g., increased hospitalizations or deaths), significant reduction in neutralization by antibodies generated during previous infection or vaccination, reduced effectiveness of treatments or vaccines, or diagnostic detection failures."

A VoHC is defined as "A variant of high consequence has clear evidence that prevention measures or medical countermeasures (MCMs) have significantly reduced effectiveness relative to previously circulating variants." Luckily, there has  been no VoHC of SARS-CoV-2 reported from any part of the world so far.

These worrying properties are attributed to mutations already present in the delta strain compounded by a new mutation called K417N (also found in the beta variant, B.1.351), present in the spike protein of the coronavirus. Recently, PHE found 6 genomes of delta plus originating from India among its collection of 63 genomes of the new strain. Now, the number of delta plus is increasing across India.  There are now about 51/52 delta plus cases reported from 12 states in India (NDTV.com, June 26, 2021). The maximum number has been reported from Maharashtra (22) followed by Tamil Nadu (nine), Madhya Pradesh ( seven), Kerala (three), Punjab (two), Gujarat (two), Andhra Pradesh (one), Orissa (one), Jammu (one), Rajasthan (one), Karnataka (one) and Haryana (one).

This variant was earlier considered to be a VOI but recently the Govt. of India declared it to be a VoC The thinking among some scientific circles is that the second wave in India was possibly triggered by the delta variant (first identified in Maharashtra) and that a possible third wave may also be caused by this delta plus strain (supposed also to have been first found in Maharashtra).

Altogether, 197 cases of delta plus infections have been reported till date from 11 countries (www.hindustantimes.com/; June 23, 2021). The maximum number is reported from the US (83), followed by the UK (36), Portugal (22), Switzerland (18), Japan (15), Poland (nine), Nepal (three), Canada (one), Turkey (one), and Russia (one) etc. The number so far thus does not seem to be alarmingly high. But, if the variant indeed turns out to be more transmissible and partly vaccine-resistant, it can turn the tables any time soon. However, more studies are needed to establish if the delta+ strain would indeed wreak havoc globally.

The delta variant (B.1.617.2) is rapidly becoming the dominant strain in the world and has now spread to 85 countries (CNBCTV18, June 25, 2021). In May 2021, WHO declared it a variant of concern (VOC), a variant may become a VoC if it's demonstrated to be more contagious, more deadly or more resistant to currently used vaccines and treatments. This variant now accounts for about 20 per cent of all new cases in the US (it was just 10 per cent about 2 weeks ago). Dr Anthony Fauci has called it the biggest stumbling block to containing the pandemic in the US. We must also note that the US is one of the few countries with the highest rate of vaccinations against COVID-19. In the UK too, delta is responsible for more than 90 per cent of all new cases. Recently, there was a 79 per cent increase in COVID cases due to the delta strain. Because of the threat of the delta variant, the UK government postponed its planned unlocking from June 21 to July 19, 2021.

Other countries facing the maximum brunt of the delta variant include France (10 per cent of new cases), Russia (90 per cent of new infections), Portugal (>50& of new cases), and Germany (COVID cases doubled within 1 week). Israel with a very high rate of vaccination and which had recently recommended "mask off, smile on" to its public has now tightened the mask requirements in certain settings because of the surging delta variant there.

The fear across the world is that delta or delta plus or another COVID variant may drive a new wave of alarming infections in several parts of the world including India.

Infections from 'Fleeting Contacts' in Australia

Parts of New South Wales (NSW), Australia have been locked down recently due to emerging cases of COVID infections due to "fleeting contact" between infected and susceptible individuals in particular settings such as poorly ventilated, crowded shopping malls (Cosmos Magazine, June 22, 2021). That means, just a brief contact of a few minutes may suffice to transmit the virus from an infected individual or 'plumes of infectious cloud of particles' originating from him to a susceptible individual who had a brief exposure to the person or the cloud. A few officials and scientists in Australia describe this as a strange new property of the delta strain of the virus. But, many scientists oppose this viewpoint. Though the jury is out on this, it's established that COVID can spread through airborne transmission and that coronavirus  particles may survive in air for several hours. Therefore, individuals must religiously follow the SOPs such as wearing masks especially in crowded settings with poor ventilation. This is especially important for people who are still unvaccinated!

Models of the Third Wave

An IIT Kanpur group has done modeling studies and suggested possible scenarios of an imminent third wave in India (www.indiatoday.in/; June 25, 2021). It has predicted a third wave to hit India as early as July 15, 2021. The group led by Drs. Rajesh Ranjan and Mahendra Verma delineated 3 possible scenarios:

In view of the raging delta variant and possible rise of other highly infectious variants, the role of vaccinations (full dosage) is very critical. Let's look at an instructive piece of news. As reported in TOI (June 18, 2021), a total of 806 people were hospitalized with delta variant infections in the UK as of June 14, 2021. Of these, 527 were unvaccinated individuals compared to just 84, which were fully vaccinated i.e. thos who got both jabs). So, one can easily conclude that vaccinations protect against hospitalizations and possible death, if not infections altogether.

There are also hints that the delta variant may lead to more hospitalizations compared to other strains. It may also be more resistant to the currently used vaccines, especially after just a single dose. As per PHE's study, both Pfizer and AstraZeneca vaccines provide 33 per cent protection against the delta variant after a single jab. After both doses, Pfizer vaccine imparts 88 per cent protection compared to 60 per cent by AstraZeneca vaccine.

It's imperative for those who got one shot to have the second jab as soon as possible. Those who haven't been vaccinated must get at least the first jab as soon as feasible. And, certain priority groups such as mothers of young children (age 11 years and below) must be fully vaccinated immediately in preparation for the third wave!

One dose of a vaccine isn't enough to protect against the delta variant. But two shots give much better protection against symptomatic infections (88 per cen for Pfizer and 60 per cent for AstraZeneca). And, individuals who are fully vaccinated may still get infected (breakthrough infections). However, vaccines are very good in preventing hospitalisations (94 per cent protection, Pfizer vaccine against the delta variant, just after 1 dose).

Certain measures would help prevent, ward off, or mitigate the third wave. One is to massively speed up vaccinations.

Another is aggressive genomic surveillance to monitor the trajectory of delta and other COVID variants across the country to ascertain which variant is surging where and catch any new variant early before it leads to a deadly local outbreak. R. Sukumar, Editor-in-Chief, Hindustan Times has another two interesting suggestions (HT, June 3, 2021). One is to link the stringency of standard SOPs (3 Ms, 3 Ws, as mentioned in previous columns) in a district to the ratio of the population that has been vaccinated. Another is about deciding when and where to ease to ease lockdowns; he suggests a possible benchmark: five per cent positivity rate or less for two weeks combined with vaccine coverage of a minimum of 20 per cent of eligible population (18 years and above) to permit easing of restrictions in any locality.