Chief Minister N Biren Singh also distributed free school uniforms for students of government and aided schools of the state at a function organised by Samagra Shiksha, Manipur at its office campus located at Babupara, Imphal on Friday. 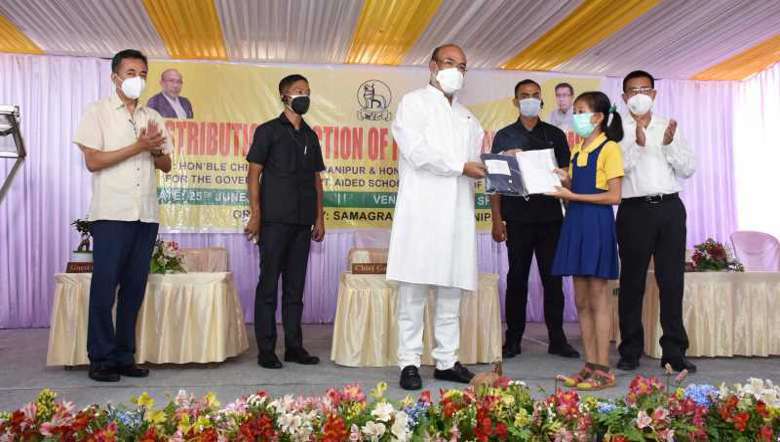 The construction of 32 tribal museums for preserving the cultural heritage of the diverse hill communities inhabiting the state is nearing completion, Manipur Chief MInister N Biren Singh said on Friday. He also said that Rs 5 lakh each will be provided for construction of toilet and almirah in addition to Rs 10 lakh which was sanctioned earlier for the construction of each museum.

With the aim to maintain quality education under the School Fagathansi Mission, Chief Minister N Biren Singh also distributed free school uniforms for students of government and aided schools of the state on Friday.

The uniforms were distributed at a function organised by Samagra Shiksha, Manipur at its office campus located at Babupara, Imphal.

The chief minister also distributed items, including K-Yan System (Projector), sports equipment, blankets and cooking utensils among others through the concerned zonal education officers (ZEOs) of different districts. The items will be provided to students of Government schools studying in Class I to VIII.

Biren maintained that the Central Government had taken up certain schemes for development in the health sector, farmer’s welfare, education and others and added that such initiatives taken up for the welfare of the people should be appreciated rather than just making criticism.

Asserting that children are the foundation and pillars of society, he stressed on the need to nurture and impart better education to children from the very beginning of their lives.

“To provide quality education to children, we need schools with proper infrastructure, experienced teachers, better teaching and learning equipment and so on. With this thought, the state government had come up with the School Fagathansi Mission covering 120 schools till now, and such initiative would help children to become creative and bring up certain innovative ideas which would be useful for overall development of the state at large,” he added.

He informed that the government is planning to provide free education to students of higher classes as well and added that such a step would help to imbibe a sense of nationalism among students.

Maintaining that Manipur is moving forward swiftly in its path of development with the support of people, he said that all the communities of the state had now come forward with the sense of oneness and unity leaving behind all odds and differences. One should try to preserve self identity and pride of their own community and pay respect to others for peaceful existence, he added.

Delivering his presidential speech, Education Minister Sorokhaibam Rajen said the distribution of free uniforms had been taken up under Samagra Shiksha Abhiyan. Under this scheme, students of government schools consisting of 76,185 girl students, 42,344 boys belonging to Schedule Tribes, 2,899 boys belonging to Schedule Caste and 27,436 students from Below Poverty Line would be provided free uniforms, he added. He also said that the scheme also covers distribution of blankets, sport equipment and other items to Residential Schools.

Rajen further said that confidence of parents over government schools had gone up and thus the enrollment of students had also increased significantly with the initiatives taken up by the state government under the School Fagathansi Mission.

He also sought the attention of the chief minister on the need to increase the number of Higher Secondary Schools for accommodating students which is likely to increase in the year with the cancellation of High School Leaving Certificate examination.