On June 22, the Federation of Government College Teachers’ Associations (FEGOCTA) had warned of boycotting online classes and examinations of government colleges by July 1 if the government fails to implement the 7th Pay for the college teachers. 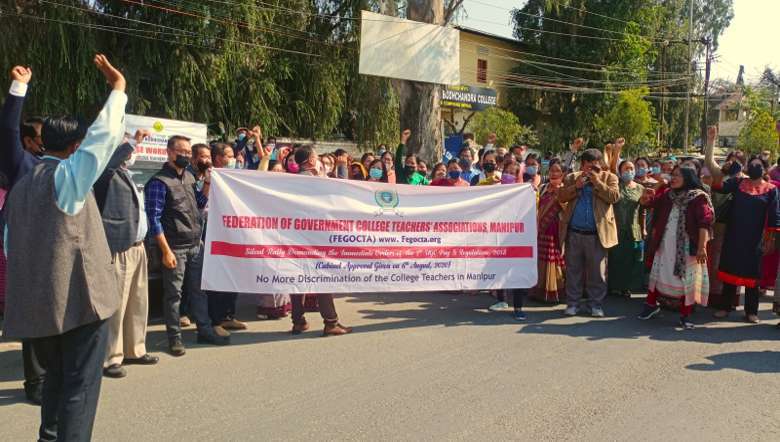 The Federation of Government College Teachers’ Associations (FEGOCTA) on Friday appealed to the Education minister to ensure that orders for implementation of UGC 7th Pay and Regulations are issued immediately.

On June 22, the federation had warned of boycotting online classes and examinations of government colleges by July 1 if the government fails to implement the 7th Pay for the college teachers.

Implementation of the 7th UGC Pay and Recommendations is the only alternative to avoid disturbances to the online classes and examinations after June 30, stated a release issued by the convenor of media and publicity committee of FEGOCTA.

Asserting that the UGC policy is an old issue, and FEGOCTA has been demanding to implement in Manipur since 2018, it questioned why the orders of 4th cabinet on UGC policy have not been issued till date.

as an excuse and making mockery of the UGC policy adopted in 2017 by the Union cabinet headed by the Prime Minister.”
As experience has shown in the past, the non-implementation of UGC policy would only cause further decline in the collegiate education in Manipur, it stated.

The release also stated that the political and bureaucratic leadership, political parties and all the stakeholders including student organisations have collaborative roles in bringing quality collegiate education.

Blaming and putting all the responsibilities to the college teachers only reflect the attitude towards the higher education in Manipur, it added.

Questioning why the college teachers are being singled out in the implementation of 7th pay while all other employees are already given since 2019, it further stated, “It is a deeper crisis in our society, culture, politics and governance. Without quality education a society will never move towards the progress, development, peace and change.”