Madhav who is the party in charge of the Northeast states arrived in Imphal on Wednesday and felicitated the newly elected Rajya Sabha MP Leishemba Sanajaoba - the titular King of Manipur. 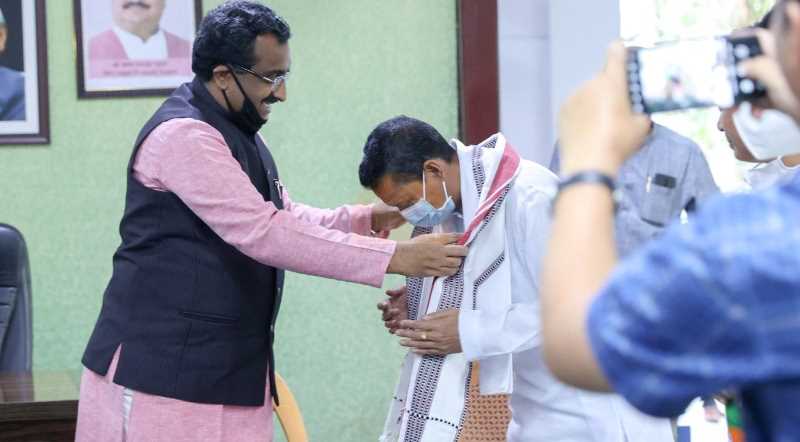 BJP general secretary Ram Madhav on Wednesday asserted that the N Biren Singh-led government will complete its full term till 2022, as the party has intensified diffusing the recent discord between the NPP and the BJP in Manipur.

"Take it from me. We will be stable till 2022” Ram Madhav told the media at the Bir Tikendajit International Airport, Imphal upon arrival.

Madhav who is the party in charge of the Northeast states arrived in Imphal on Wednesday.

The BJP general secretary said questions regarding stability of the government have been raised for the past one year and it has been seen that the coalition ministry in Manipur had always been stable and winning elections.

Ram Madhav on Wednesday also felicitated the newly elected Rajya Sabha MP Leishemba Sanajaoba - the titular King of Manipur. Electing the member of the erstwhile royal family to the ‘House of Elders’ honours the culture and long-standing traditions of Manipuri people, said a tweet by BJP leader Rajat Sethi.

Meanwhile, the four MLAs of the National People’s Party (NPP) Manipur who air dashed to Delhi on Tuesday met Union Home Minister Amit Shah and JP Nanda, president BJP on Wednesday. The NPP delegation was led by Meghalaya chief minister Conrad Sangma and NPP Manipur leader Y Joykumar. According to BJP leader Himanta Biswa Sarma, both BJP and NPP will continue to work together for the development of Manipur.

However, it was not immediately known whether or not NPP will return to the N Biren Singh-led coalition government. At the time of filing this story, Imphal Free Press could not contact any of the NPP leaders who are camping in Delhi.

It may be mentioned that the four MLAs left Imphal late Tuesday around 5 pm by a special chartered flight along with NPP chief Conrad Sangma. They were reportedly invited by Union Home Minister Amit Shah with regard to the political crisis in the state.

The NPP MLAs’ visit to the national capital came a day after Conrad Sangma and NEDA/BJP chief Himanta Biswa Sarma’s visit to Imphal. The two leaders held a series of meetings with the NPP MLAs and chief minister N Biren Singh among others. A source from the NPP said Sangma and Sarma were in Imphal to persuade the four NPP MLAs to rejoin the BJP-led coalition.

The big question now is whether there will be a patch-up between NPP and BJP with a change in coalition leadership as NPP’s position was made clear after they walked out of the N Biren Singh-led  government  or will Ram Madhav’s prediction come true with N Biren Singh’s leadership remaining intact till the next assembly election.