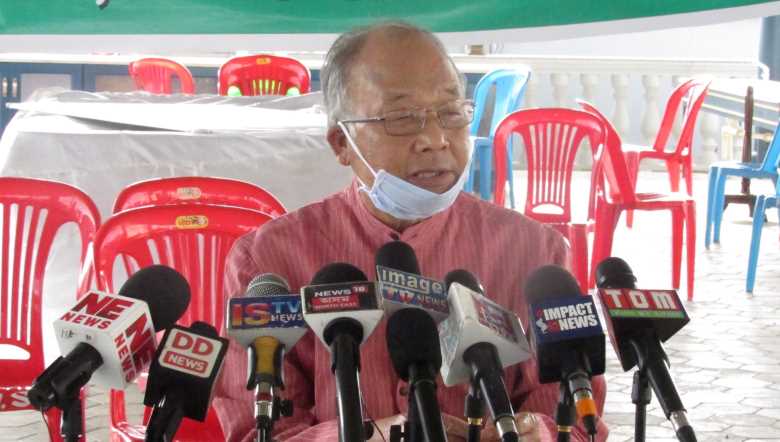 Former chief minister and Congress legislature party leader Okram Ibobi said on Wednesday that he is ready to receive punishment as per the law if found guilty during the course of investigation by the CBI while clarifying that the allegations on misappropriation of development fund is baseless as his tenure as chairman of Manipur Development Society (MDS) was only for about a year.

Speaking at a press conference held on Wednesday at his office quarter located at Babupara, Imphal, Ibobi clarified that his tenure mentioned in the media has been misquoted. “I am ready to extend full cooperation for any type of investigation,” said Ibobi to the media after the CBI official interrogation was conducted.

He said that the CBI officials told him that they were instructed to complete the investigation quickly. He told them that he will give full-cooperation during the course of investigation, he added.

“Everything is recorded regarding funds of MDS and I am not involved in any misappropriation of funds,” he asserted.

He said as a part of the investigation, the CBI team questioned for about two hours. They asked to provide particulars of his family members, PAN details, income tax returns and others and they were provided to the team, he added.

Some news reports mentioned that his tenure as a chairman of MDS was from ‘2009 to 2017 which is erroneous’, he said. He appealed to the media to make the correction as his chairmanship for MDS was from ‘July 2013 to august 2014’.

As per rules and regulation, the chairman has no significant role but to chair the annual general body meeting of the society, he informed. All transactions for the society have to be carried and dealt by the project director, Ibobi said.

He further said during his one year tenure as the chairman of MDS, he did not sign any cheques or any documents related to work order.

Responding to the media, Ibobi said as someone raised the complaint for misappropriation of funds for MDS, the neutral agency, CBI is doing their duty. “I will cooperate with the investigation but I have no idea what will be the hidden agenda,” he added.