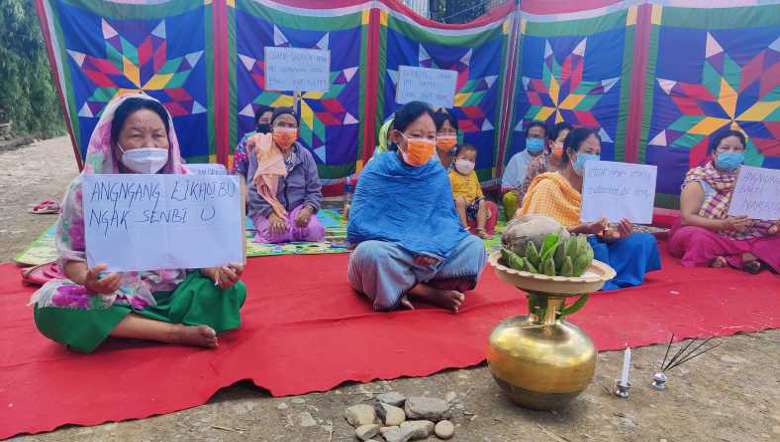 Demanding legal action against two brothers who were accused of not only assaulting but also chasing and opening fire at a 13-year-old boy, locals of Khurai Ningthoubung Leikai, Imphal East staged a sit-in protest at the locality on Monday.

According to the victim's mother, Huidrom Inaobi Devi, one of the accused Yumkham Ibomcha, a teacher of Ananda Singh Higher Secondary School physically assaulted her son on the night of June 18.

She said that when her son fled away by pushing Ibomcha, Ibomcha gave his loaded pistol to his brother Yumkaibam Naobi alias Penao, a VDF personnel, to shoot the kid.

With the gun in his hand, Naobi chased the boy and fired some rounds, she further alleged. Fortunately, the boy did not sustain any bullet injury, she added.

Moreover, Naobi had also pointed the loaded weapon at some other kids also, the victim's mother claimed.

A complaint had been lodged at the Porompat police station as well as to the MLA of Khurai assembly constituency against the two brothers; however, no action has been initiated against them till date, Inaobi further said.

One protester questioned on what reasons a gun license is being given to a teacher. “What actions are taken up against the two accused persons for misusing the deadly weapon?" the protester further questioned. She also asked who would be held responsible if the kid got hit by a bullet.

The protesters appealed to the state government to arrest the two brothers and take up legal proceedings against them at the earliest.