The inspector then informed PFA Manipur and brought the two cubs to the PFA shelter on Saturday evening. 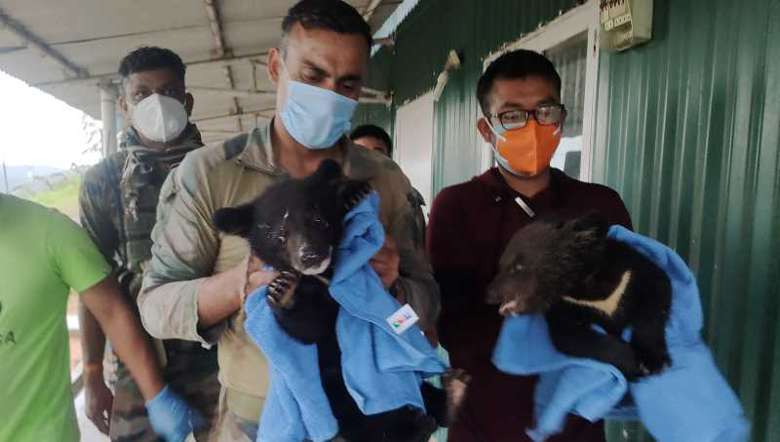 Himalayan black bear cubs were rescued by a team of 18 Assam Rifles, Chandel Post and handed over to People for Animals (PFA), Manipur on Saturday.

PFA managing trustee, L Biswajeet Meitei said that the two bear cubs were being rescued by the AR team while conducting patrolling at Larong Khunou, Chandel. During the patrolling, the AR team saw two men who looked suspicious to be hunters at a far range and immediately called upon to come at the AR site but the two hunters ran away from the area. Soon after, the team rushed to the site and found two black bear cubs (one male and one female) lying on the ground and they were brought to the AR camp.

Later, unit commandant of 18 AR Chandel, colonel Ajit Kshatri handed over the cubs at 26 Sector AR Post Pallel and informed the same to the inspector of Wildlife Crime Control Bureau Border Unit, Moreh. The inspector then informed PFA Manipur and brought the two cubs to the PFA shelter on Saturday evening, he added.

He further said that the two cubs will be applied with ‘no worm’ and kept at the PFA Shelter for two or three days and then will be handed over to State Zoological park, Iroisemba.

It may be mentioned that the Himalayan black bear is listed in the scheduled III of Wildlife Protection Act and also listed in the vulnerable category of threatened red list of IUCN.