The people of Twilang area alleged Assam Rifles of 'dishonouring the four-point agreement' over Chalwa killing. 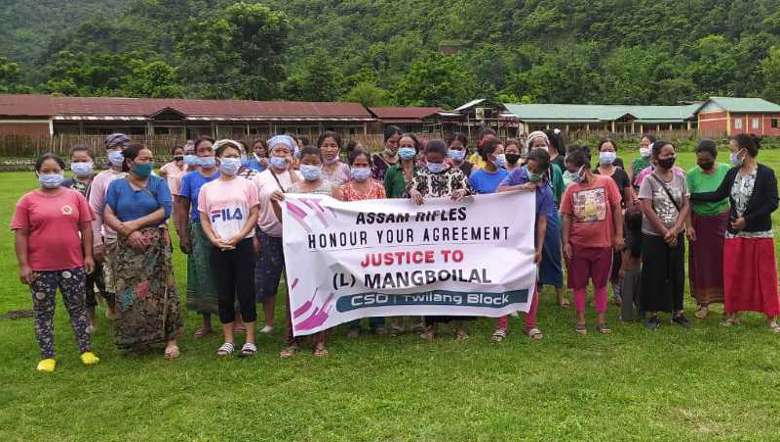 Alleging the Assam Rifles authority of 'dishonouring the four-point agreement' in connection with the infamous Chalwa killing, people of the Twilang area held a peaceful protest sit-in at Chalwa village on Wednesday.

It may be recalled that one Mangboilal Lhouvum was allegedly shot dead by post commander of 44 AR, E Coy, Banglabung Outpost major Alok Sathe on June 4 evening.

In connection with the killing, a four-point agreement was inked between the Assam Rifles authority, the state police, and civil bodies of Kangpokpi under the aegis of Kuki Inpi Kangpokpi district on June 5.

The peaceful protest sit-in held at Chalwa was organised under the aegis of Kuki Inpi Twilang and KSO Twilang. The protesters, mostly women, held a banner that read, ‘Assam Rifles honor your agreement’, Justice to (L) Mangboilal - CSO Twilang block.’

Meanwhile, general secretary Kuki Inpi Kangpokpi district Thangminlen Kipgen in a press conference at KSO Sadar Hills office at Kangpokpi town said that even after eleven days of the murder committed by the 44 Assam Rifles and the subsequent four-point agreement signed by the civil bodies, the Assam Rifles authority and the state police, the Assam Rifles failed to portray seriousness in fulfilling the agreement.

Rather, the Assam Rifles seems to be taking other measures to prove that the deceased was not a civilian but a member of an underground militant group, he said.

He said that while questioning the credibility of the Assam Rifles over the Chalwa killing and subsequent agreement, the people of Twilang area, in particular, held a democratic protest to display their discontentment on Wednesday while demanding the Assam Rifles to honour the agreement.

“It is to our surprise as well that the Assam Rifles would not honour the agreement signed in the presence of Commander 22 Sector Assam Rifles, ADGP Manipur, SDO Tujang Waichong, and CVOs,” asserted the Kuki Inpi Kangpokpi secretary.

He also said that the victim's family and the civil bodies were hurt while the Assam Rifles is looking for other means and measures to change the direction of the investigation by tainting the image of the deceased Mangboilal.

“Do not tag civilian Mangboilal Lhouvum as a member of the underground militant outfit until proven by the Court to subside the case,” asserted Thangminlen Kipgen.

He urged the Assam Rifles to fulfil the points of agreement to regain the trust that they have lost among the people. The civil bodies are always ready to assist in ways they can assist them but it will be very unfortunate and undesirable if the Assam Rifles continue to find other means to fulfil their vested agenda, he said.

He said that the state government has been reminded to immediately fulfil their agreement by activating and make functional the Chalwa Police station with 40 strength capacity as agreed in the agreement while assuring that the people of Twilang are ready to provide them land, food, and that it was a necessity to make the police station functional within few days.

“We have reasons to believe that the security of the witnesses of the Chalwa killing and the victim's family may be in trouble and for security reasons the witnesses shall be protected,” he said.

After the Chalwa incident, there had been reports of viral posts in social media and clarification on the part of the Assam Rifles that the deceased Mangboilal Lhouvum was a member of the Kuki Revolutionary Army (KRA), under Suspension of Operations. However,the outfit opposed the allegation and clarified that the deceased whatsoever has no connection with the outfit and it has nothing to do with the deceased.

The wife of the deceased and the people of the area also affirmed that the deceased Mangboilal Lhouvum was an innocent civilian and a daily wage earner.

It was also reported that the accused major Alok Sathe has applied for anticipatory bail.