Counting the dead and infected

IFP Editorial: Just like the Aadhaar which has reduced us citizens to unique numbers, have we been reduced to just numbers in the death count of the pandemic? 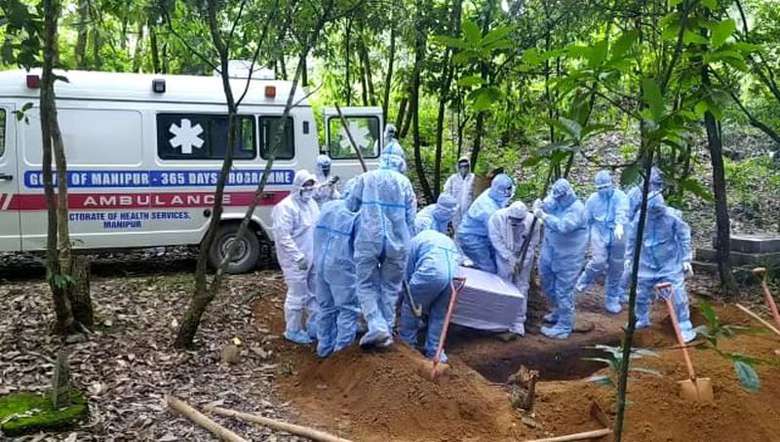 In Covid times, life is not normal and the talk of a ‘new normal’ is just a figment of our over-extended imagination. For the common man, life is fixated on the evening news and morning news of the next day, as one gets the daily figures of new infections by Covid-19 and number of deaths. In the morning newspapers, as one scans the pages of the newspapers you get to know the deaths of noted personalities and others from the condolence messages. For those in WhatsApp groups and Facebook, one gets the daily feedback a little early than the rest.

As of Wednesday, a total of 752 people were tested positive out of 8,492 tested during the last 24 hours at RIMS, JNIMS and several other laboratories and 10 deaths. Of the 752 who have been tested positive, 231 belong to Imphal West, 125 to Imphal East, 39 to Thoubal, one to Tengnoupal, 37 to Bishnupur, 84 to Kakching, seven to Chandel, 21 to Kangpokpi, 88 to Churachandpur, 13 to Senapati and 39 to Tamenglong, 34 to Ukhrul, six to Noney and seven to Jiribam while it is nil in Pherzawl district.

The latest recovery rate has been pegged at 83.69 per cent with a total of 1,008 deaths and 9,078 active cases, so far. The cumulative figure of positive cases is 61,848. After the detection of the first case of Covid-19 positive in the person of a London returnee girl from Thangmeiband on March 24, 2020 it has become a routine affair for the Health department to release the numbers with a sprinkling of data analysis to the media. Out of 30 lakh population, Manipur’s cumulative figure of positive cases and number of deaths is quite high. While there is no such controversy of under-counting the number of Covid-19 deaths like elsewhere in the country, there is some silly talk about deaths due to Covid-19 or co-morbidities. If we might add, the health department could also share the occupancy figures of the hospitals, both public and private, as against the number of Covid-19 beds available for information of the public.

With the daily dose of figures being served, the first question on the lips of the general public has also become the numbers. This is indeed a disturbing trend in the public psyche. Even the media has become addicted to the figures, while human interest stories related to the pandemic has largely been missing. Just like the AADHAAR which has reduced us citizens to unique numbers, have we been reduced to just numbers in the death count of the pandemic? What we want to impress upon the state government and health authorities is that the pandemic is not all about numbers and figures.

It is a public health issue, which has impacted the socio-economic life of the general population like never before. The world has changed and we need to adapt to the changes. And it is not the time to hide behind figures.

Meanwhile, the general public continues to count the number of daily deaths and number of infections and of the percentage. This surely is not normal behaviour. Even if a family member or relative is infected with Covid-19, one cannot go and nurse them at the hospital or Covid Care Centres. You entrust it to the care-givers at the hospital or centres. While a friend or relative is dead because of the pandemic, one cannot simply go and physically express one’s grief or condolences.

The only consolation is the mobile phone through which one can call up and express condolences.

And most important, community participation in case of deaths had been missing for quite some time. Now, the family is left to fend for itself with no one to share the grief with. Life is indeed cruel.