The total weight of the seized drugs is 376 grams 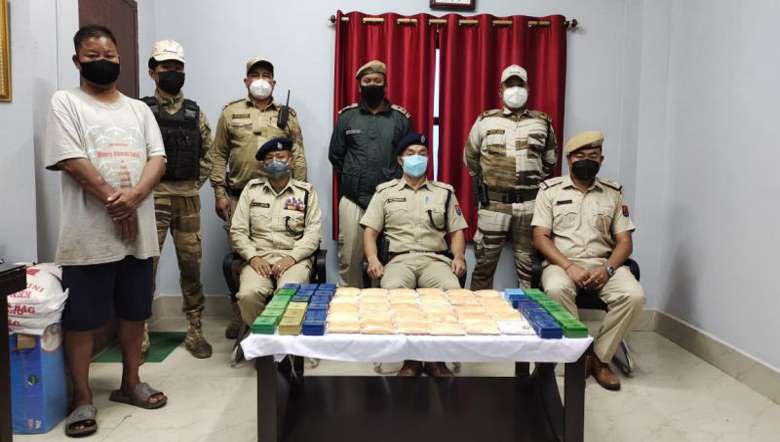 Tengnoupal district commandos arrested a drug trafficker while illegal drugs worth around Rs 75 lakh were seized from in his possession at Imphal-Moreh road (NH-102) on Monday.

A team of Tengnoupal district commandos led by ASI W Ronny under the command of additional SP (ops) Th Krishnatombi Singh was conducting frisking and checking operations on National Highway 102 near Loishii Village when they saw an Eeco Van bearing registration number MNO2C 0354 approaching from Moreh towards Imphal in a suspicious manner.

The commando team detained the van and a thorough search of the vehicle revealed 29 soap caps containing suspected brown sugar along with one soap cap containing suspected Heroin powder that was concealed inside the ceiling of the vehicle. The total weight of the seized drugs is 376 grams and it may be worth Rs 75 Lakh in the International Market, police sources stated.

The drugs along with the vehicle were seized, and the driver of the van, Paongam Haokip, 48, from Tuibong Laizon Veng of Churachandpur district was also arrested at the spot and handed over to Tengnoupal police station for further legal proceedings. A case has been registered against Paongam Haokip for possession of illegal drugs under the NDPS Act 1985.

SP, Tengnoupal Vikramjit Singh also presented a cash reward to the CDO team for nabbing the drug trafficker and the recovery of the illegal drugs, police sources added.