Who is to be blamed for prevailing short-sighted response to raging pandemic?

authorities need to come clean in its strategies whether it’s for accommodating Covid positive people from all walks of life or in the testing front. 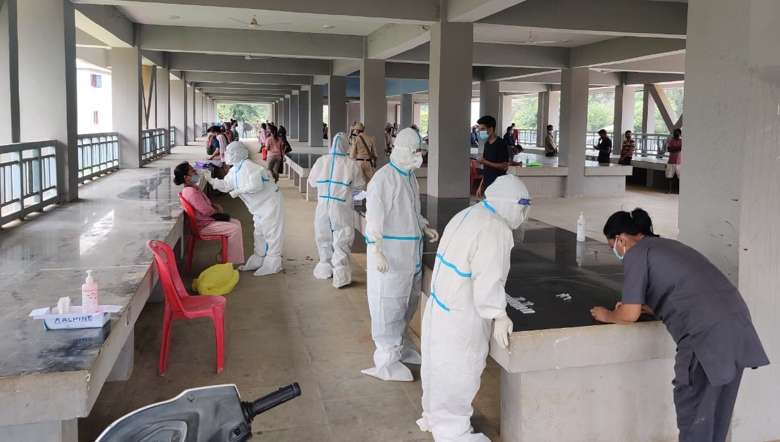 THERE is no denying the fact that the Manipur government and its machineries are doing a commendable job to contain the COVID-19 surge in the second wave by utilising multiple resources at its disposal. However, in spite of all apparent efforts being made, there seems to be probable lapses even while looking only on the aspects of handling high risk and vulnerable populace.

Keeping aside the woes of drug and substance dependency for a while and taking a rational look into the ongoing mass testing of COVID-19 from the perspective of alcohol use and abuse, the possibility of finding COVID-19 positive people with alcohol dependency problem could be unprecedented owing to the fact that local brew vendors are springing up in every nook and corner of the state sincethe last few decades. Now, in such cases, will the problem not go out of hand and escalates beyond our imagination?

Are we really well prepared for such an eventuality? If so, what strategic planning and provisions has been put in place by the authorities? Is it not the right of the people to know the steps and measures being taken up by the government subsequent to the mass testing?

Very recently we heard of a case in point in which an alcoholic-Covid positive patient has to be shifted from a Covid isolation centre to RIMS casualty due to hallucinations and other alcohol related withdrawal problems. And, the doctors advised to keep the patient at home instead. Ridiculous as it may sound, this is the state of affairs at the moment while dealing with cases that needs special care. Now, who is to be blamed for such a short-sighted response to the raging pandemic? Should not the government who is at the helm of affairs be blamed? Again, how frequent would the mass test be repeated when the people are still bound to go out for their needs, including food, essential commodities and medical requirements? What would happen to those families with just two members or with few kids when either the sole bread earner or the mother is tested positive?

It is also rather astonishing to learn that the shopkeepers of pharmacies and workshops are forced to get tested, if at all they need to open their shops. However, there is no instruction on how many times should a shopkeeper undergo testing or how long would a negative report stand valid in order to remain at work each day? Hope the situation would not remind us of the aged old saying “angaobana nupi thiraga khunna thokpa”.

Another incident of drug overdose was heard in a quarantine centre last year and there have also been various reports of smuggling-in of drugs/alcohol inside the centres alongside incidents of drug/alcohol users escaping from quarantine centres. Even recently, an incident of a drug user who is also a Covid positive patient running away from RD wing Lamphel went viral on social media. However, it is very unfortunate that there seems to be no lessons learnt from the bitter experiences over the last 12 (twelve) plus months of COVID-19 situation.

People who have alcohol dependency problem cannot be kept safely in common isolation centres which have a lot of complaints about its inadequate settings. Moreover, alcohol withdrawals are reported to be very severe often resulting in tremor, disorientation, hallucinations and seizures even leading to death in many cases. Adding drug users from across the state to the equation will be an altogether different scenario that will only make the matter worse.

Mass testing may be punitive, mandatory or otherwise, but the question is, “Has the government really decided to cover a total of 31 lakhs population?” Then are we strategically prepared for its outcome? Is the government ready to deal the problems with its limited isolation centres? If so, what are the feasible mechanisms being deployed? If not, why go for mass testing and waste resources?

Incidentally, there are apparent irregularities in the testing procedures as well which is creating a big confusion among the general public. Normally, RAT (Rapid Antigen Test) followed by a RT-PCR (Reverse Transcription- Polymerase Chain Reaction) as a confirmatory test in case of any positive result is the standard procedure. However, at this critical juncture of the alarming second wave of COVID- 19 with death toll touching a double figure on average, the authorities are still relying on the RAT as a final test as per its adopted strategy. RAT as a final test won’t be suggested by any medical practitioner from the core of their hearts and also its accuracy is still debatable. Would the higher ups in political echelons or policy makers go for RAT as a final test personally or would they suggest their wards or family members to do so? What makes the matter murkier is the recent government’s directive to prevent any cross checking of RAT’s result in any of the private diagnostic centres in the state.

At this juncture, it won’t be wrong to appeal two important options to the govt. (A) to shut down completely those expensive tests available in some private settings as it may draw a discriminatory line between the poor and the rich. (B) To facilitate free confirmatory test for all those tested positive in the mass testing so as to avoid much pressure on most of the people while trying to afford a sum of Rs.1400-1800 for the same when they are still struggling with the local agents for not providing right quotas of groceries comparing to government’s allocation.

Again, another major issue is the accommodation of people tested positive. It is a known fact that govt.settings like govt.schools/colleges do not sound practical to hold more than 50 people at one time. There are usually no proper & not enough toilets or wash rooms in govt.settings. Poor sanitation may eventually lead to other communicable diseases and its related health problems. Hence, simply dumping of people in such environment would never serve the purpose. Besides, there are generally either no fencing walls or the existing ones are unsecured which is unsafe especially for people who have problems with drugs/alcohol. Now,the question of where to accommodate the positive patients after this mass testing, arises. What would be the impact on those people other than fear and tensions if they are to remain or be confined at home even after knowing their Covid status? Here, another inevitable question comes to the fore that is “Why can’t the govt. issue a directive to utilise the private schools having adequate set-ups? This battle is not meant to be fought by government alone; we also have our shares. There are plenty of well-structured private schools everywhere that should readily extend their contribution with a sense of “sharing is loving” by giving shelter in their respective schools particularly which are strategically located.

The final prayer is that the authorities need to come clean in its strategies whether it’s for accommodating Covid positive people from all walks of life or in the testing front in order to avoid unnecessary chaos and pressures in public health and in family health as well.