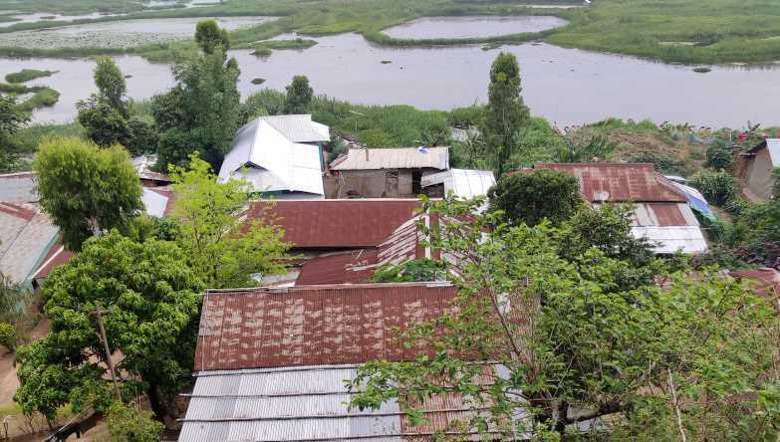 KARANG Island village is located in one of the largest fresh water lakes in North East India – Loktak Lake in Manipur. It is a popular tourist destination and was once touted as a model village. The Union Electronic and Information Technology Ministry in 2017 declared it as India’s first cashless island. Yet, it remains one of the most underdeveloped regions of the state. Till today it lacks several basic amenities and infrastructure.

The Government of India had also selected it and three other villages for bringing integrated development under the Pradhan Mantri Adarsh Gram Yojana (PMAGY) in the year 2019-2020. However, no sign of development is visible. The other villages selected are Chamfu Khangpok under Bishnupur district, Makhabosti in Imphal East district and Yaithibi Khunou in Thoubal district. Fund was also released by the Central government with a total amount of Rs 43,20,000 on August 23, 2019 as the first installment for these four villages. Each village will get an amount of Rs 10.80 lakh for development projects under the scheme.

The main target of the scheme is to fill up the basic requirements which cannot be met under the existing schemes of the Central and the state governments. But despite the deprived condition of the island where there is no proper healthcare facility or all-weathered road, educational institutions and drinking tap water supply among others, most of the developmental schemes or projects are yet to be implemented effectively in this island region.

During a visit to Karang by this reporter of Imphal Free Press to take stock of the situation of life in Karang, the villagers collectively expressed their long pressing demand for proper infrastructure to lead a dignified life in the island which remains cut off from the rest of the state during the monsoon months as the floating biomass surround the island and block the waterways.

One of the residents of Karang, Haobijam Gaurahari, who is in his 70s, said that everyone is pleased to see Loktak Lake at least once in their lifetime. As such, many people from far-flung areas outside the state and country visited to enjoy the beauty of the lake. But sadly, the island situated in the middle of this serene lake still remains the same without any progress and development.

The only developmental activities he had witnessed in his 70 years of living here is the construction of a tap water supply project, primary health centre and its quarter. But there is no use of it as the tap water is yet to be connected till date even after many years of its construction and the primary health centre does not provide healthcare service properly, a differently-abled person lamented.

"We heard that the Central government has released funds for development of the region but not a single change has been brought about in the island since the last many years. Not a single route of this village is well constructed. Settling in such a pathetic condition even during this highly developed era has made them feel that they are completely neglected by the state government," he further said, while appealing to the authorities concerned to take up some steps to uplift the standard of life for the people. The Karang island holds around 3500-4000 residents.

He said that staying in the middle of the lake without having sound economic status and lack of many basic amenities is not an easy thing. The people here have to face several challenges in their daily life and untold problems during emergency-like situations.

Advisor, Karang Island Development Organization, Haobijam Gitajen Meitei, said that in the name of bringing development, the government had released several funds but the local people are yet to enjoy its benefits. In this modern society, not a single route within Karang island is black topped even though the island is one of the popular tourist spots of the state.

The island was declared as the first cashless island of the India. However, the title has become just a mere declaration as the maximum number of people in Karang are not even aware of digital payment, he said, adding that such an announcement may have benefited some officials of some departments but not the locals.

"There is no proper infrastructure to operate digital payment. Moreover, many of the residents are living in poverty and they did not even bother to open bank accounts. Unless the economic situation of the local populace is improved, we can't even imagine promoting Karang as a cashless island," he claimed.

Stating about the absence of tap water connection, he said that though the water supply project was taken up some years ago, the villagers are yet to get pure drinking water.  Till date, they are using water from the Loktak Lake for every purpose.

The lake is highly polluted for many reasons. As such, people used to purify in a very conventional method which is a serious threat to their health condition, he added.

Many people from beyond Karang village had started motor boat service in Loktak Lake for business purposes. Such activity pollutes the ecology of the lake by the remnants of the boat and gives inconveniences to the fishing community. The state government should draw attention to monitor the motor boat service in the lake, he suggested.

While appealing to the chief minister of the state to make a visit at Karang as a part of the Go to Village mission, just to take stock of the Karang people’s plight, he said it is very unfortunate that the myth of leaders visiting Karang lower down their position has made every chief minister reluctant to come and view Karang since the last four decades.

Without seeing the ground reality, the leaders of the state might not have much interest in bringing development in this region which is very much associated with the history of the state. As such, the chief minister of the state is requested to kindly land on the island at least once as a part of his "Go to Village" mission, he added.

"After the then chief minister of Manipur, Rishang Keishing, no chief minister had ever visited the island even though it is one of the important places of the state. People of Karang would be very grateful if any leader breaks that myth and makes a visit to this natural bountiful island," he said.

It may be mentioned that PMGAY was launched by the Union Ministry of Social Justice and Empowerment in 2009-2010 with an aim to provide integrated development of villages in which the population of Scheduled Caste is above 50 per cent.