Meghalaya Chief Minister Conrad Sangma said the Finance and the Power departments have been asked to work out details of the different targets which the MeECL has to achieve. 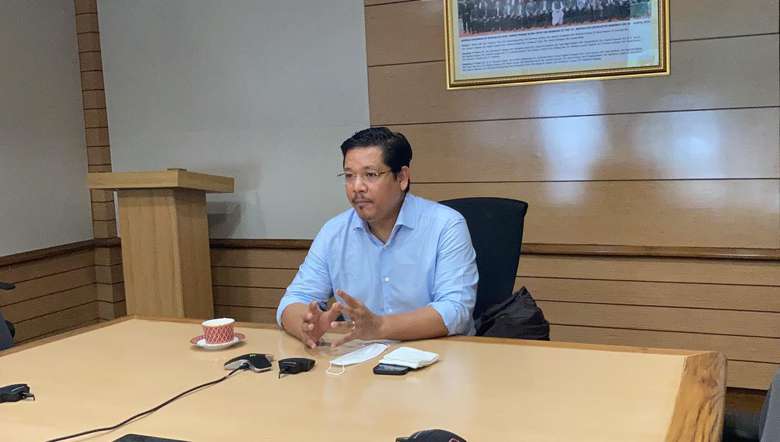 Under pressure, the Meghalaya government on Wednesday agreed to extend full budgetary support to the Meghalaya Energy Corporation Limited (MeECL) for repaying the Rs 1,345 crore Atmanirbhar loans with a rider that certain targets have to be achieved in a time-bound manner.

The decision was taken by the state Cabinet based on the request and assurance given by the power department and MeECL management to bring necessary reforms in the corporation.

This also came following stiff opposition from several quarters including cabinet ministers against the move to lease out the distribution circles of the MeECL to the Rural Electrification Corporation Power Distribution Company (REC PDCL) for a period of 25 years.

"(We) decided to give a chance to the MeECL and to the power department with 100 per cent budgetary support for the Atmanirbhar loan but this support of 100 per cent will come along with certain targets that need to be met in a time-bound manner," Chief Minister Conrad K Sangma told reporters after the meeting.

"(The other condition being put in was that) there has to be some kind of a security in terms of mortgage of MeECL assets to the government of Meghalaya to ensure that there is some of kind of safety and security for the state government also," he added.

Sangma said the Finance and the Power departments have been asked to work out details of the different targets which the MeECL has to achieve.

"We will inform the REC and the Power Finance Corporation Ltd (PFC) that 100 per cent budgetary support will be given by the state government," he said.

Sangma informed that a meeting was held with the power department led by the power minister himself and the chairman of MeECL where they have shown different aspects of power and also different steps that they will take to ensure that the reforms take place to achieve the overall revenue that is expected and also to reduce the aggregate technical & commercial (AT&C) losses if given a chance and stressed that the DFs option should not be taken.

"Similarly, I had a meeting with the MeECL employees and they have also expressed similar concerns in line with the power minister had said that the DF option may not be taken and state government may give full budgetary provision and the MeECL and its staff and engineers will work together to ensure that the different targets in case are put in will also be achieved," he said.

Stating all these aspects were discussed in the cabinet meeting, the chief minister said that it was also clarified to the cabinet that these funds are going to come out from the same pool of resources that the state government has.

The Atma-nirbhar loan has been taken by the MeECL in order to pay the outstanding dues amounting to Rs 1,345 crore to all the power generation companies  which has been pending for the past 10 years.

The REC and PFC have put conditions on the government of Meghalaya and MeECL while disbursing the loan.

"We have received the first tranche of the loan and before releasing the second tranche which again is Rs 600 crore plus, the REC and PFC have stressed on two options. The first option is that government of Meghalaya give full budgetary support for the repayment of this loan along with interest which will amount to close to Rs 2,000 crore in the next 10 years or give a partial budgetary support along with certain restructuring within the MeECL which would be in the form of giving Distribution Franchisees (DFs) to REC and PFC," the chief minister said.

He said these matters have been discussed in detail with the power minister, power department and MeECL management.

From day one, the MeECL, power department and power minister himself have stressed that the state government should give full 100 per cent budgetary support without going for DFs.

"On the other hand, the finance department felt that since the amount is huge and in order to reduce the budgetary provisions and obligations on the finance and on the state government as a whole, certain amount should be given as budgetary provision and some for certain restructuring in terms of DFs may be done in the interest of finance," he said.

Stating that DFs are not new in Meghalaya, the chief minister said DFs have been there for a long time and there are many DFs that are there working.

Sangma said the government will give the backing in terms of the budgetary provision but at least some kind of safety for the government is also required so that MeECL is not totally free.

The Chief Minister said there is no risk for the state government in giving full budgetary support to MeECL.

"As I said government has anyway decided to give budgetary provision of 75 percent which comes to around 1,600 crore in the next 10 years, 25 percent would mean another 560 crore - now, the important thing to note is if MeECL pays, then it does not comes on the state government but if MeECL is not able to pay then the state government will have to pay - so that is really what the issue is here.