Science and COVID-19: Where are we headed?

The present need of the hour is not unscientific large scale mass testing but focussed testing on those having symptoms or are primary contacts identified through robust contact tracing. 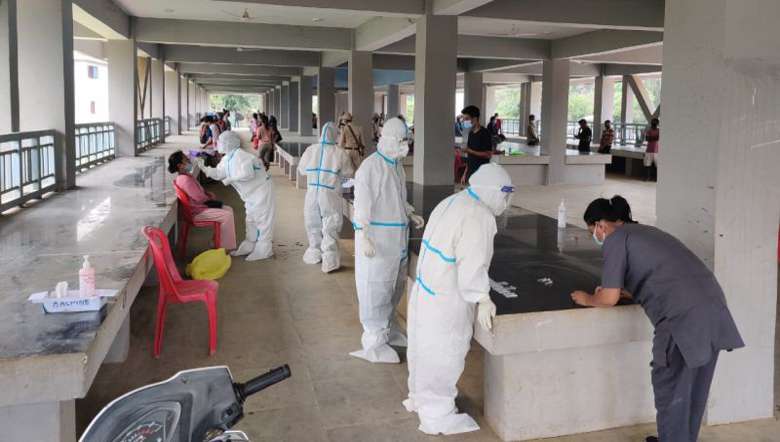 During the COVID-19 pandemic, either in the first or second wave, no country had made an effort to test the entire population or felt the need for it. The reason is not far to see as no country have the resources or the logistics to test the entire population and the benefit is marginal as a person once tested negative may become positive within a few days. Hence, the emphasis is on testing of those who develop symptoms and robust contact tracing and testing primary contacts. It is based on solid scientific reasons. In Manipur unfortunately, contact tracing is to say the least, poor. The tendency in contact tracing is to question the positive person and his claims is taken as final. And any person tested positive is affected psychologically so that he either forgets or does not come out with full facts of the numerous contacts he had during the past few days.

WHO in their publication on “Operational guide for engaging communities in contact tracing” reviewed and published on May 28, 2021 based on certain principles reiterates that contact tracing is a key component of a public health response to infectious diseases and contact tracing is most effective when the community where tracing will take place is actively involved at all stages, including planning, implementation, and review. It also emphasises that taking time to cultivate relationships with people whose communities have been affected is paramount to building trust, community buy-in, participation and ownership which are crucial for successful epidemic control. Unfortunately in India and in Manipur also, contact tracing is assigned the least importance. Call for involving local volunteers and club members had fallen into deaf ears.

Manipur has now started what is called aggressive mass testing where even people on the street were force tested. To discourage those who violate the SoP, force testing of those who violate may be resorted but the benefit that accrues from it is limited. Majority of the population is still free from infection of SARS-CoV-2 and the percentage of those testing positive in such mass testing will always be small. There is no scientific logic or reason to conduct mass testing at Karang village where there was no positive case, and naturally the result will all be negative. The focus should have been on those villages or localities where positive cases were detected and more testing can be conducted there with focus on the proper selection of individuals to be tested based on their likely contact(s).

In fact, when there is community transmission in a large scale, as is seen in different parts of the state, aggressive testing dilutes the activities in other priority core areas, like ramping up the treatment facilities, providing necessary requirements for taking care of those suffering from COVID-19 and also in the vaccination process. This is more so as the new Variants of Concern (VoC) provides higher false negatives and once a person is declared as negative, he is most likely to indulge in COVID inappropriate behaviour. The present need of the hour is not unscientific large scale mass testing but focussed testing on those having symptoms or are primary contacts identified through robust contact tracing while providing necessary logistics for those requiring oxygen and medicines and to have a proper vaccination plan. In the vaccination plan its procurement should have been in the forefront but with the PM declaring that all above 18 will be tested free and the Centre will make available the vaccines, the burden of the states have considerably been lightened. The so called aggressive mass testing took away some of the resources from such priority areas. The cry for aggressive testing by many, including this writer is to increase the number of test per day through aggressive contact tracing involving local volunteers who can identify individuals who are having symptoms but avoiding testing and who knows the usual contacts of an individual who was declared positive in their locality. The whole rigmarole of the mass aggressive testing only seems to increase the number of test to bring down the positivity rate below 10!

Majority of the test were conducted by RAT, which comprises about 85 per cent of all testing done during the last few days. RAT has low sensitivity of around 60 per cent, perhaps lower in the case of new VoC, and is not likely to capture even all those who are infected. Besides, those who are in the window period or latent phase of a few days will not be detected by any of the testing method available. Hence, the benefit of the so called aggressive mass testing will not be of much use in the control of the epidemic. It will only increase the expenditure without concomitant benefit and the cost benefit ratio will incline heavily towards costs. And doing so when the state is resource starved even to provide paediatric formulations to positive children is nothing but criminal.

There is also a government order that all shop owners and salesperson should have been tested. The order is silent on the frequency of tests as a person can theoretically become positive within 5-7 days. Are they to undergo test every week? Precaution is better but proper use of double mask and judicious use of hand sanitiser can serve the purpose of restricting transmission in shops.

The only way to beat the disease is through science and the fight between allopathy and Ayurveda at this juncture is unfortunate and uncalled for. Allopathy is grounded in science, in that it followed scientific principles whereas for Ayurveda, the final word had already been spoken. China after Project 523, which led to the discovery of artemisinin in 1972, the new drug for malaria caused by Plasmodium falciparum from the study of the traditional medicinal herb, Artemesia annua leading to the award of the Nobel Prize to the team leader Prof Tu Youyou in 2015 led to systematic studies of their various traditional medicines and there are thousands of academic papers on this matter. Unfortunately in India, the scientific research on our rich traditional medicinal heritage is very poor and there is always a conflict between the traditional healers and the modern scientists. The giving of the nomenclature of doctor to those who graduate in any discipline under AYUSH is perhaps a wrong step; it should have continued the traditional nomenclature of Vaid, Siddhant, Hakim, Homoeopath, etc leading to conflicts. In Manipur also, there is as yet no systematic study on any of our traditional medicines, except a few publications on our traditional knowledge which only highlights their traditional uses rather than finding out the active principles, its effect on the human body, etc.

The crisis the second wave of the pandemic had led to a situation where one is in doldrums of what to do. One measure after another does not lead to reduction in the raging transmission as most of them are unscientific and what other ways than to look for divine intervention. Praying to Gods of different hues! This is nothing but populism following Karl Marx’s dictum “Religion is the Opium of the Masses” believing when everything is down, praying to Gods may bring some psychological relief to the masses, while trying to show that the government is doing its best. Unfortunately, people may become cynical of the efforts of the government. If this was done in the 19th century as was done during the cholera epidemic then, one can understand but not now. State leading in the forefront to organise mass prayer for controlling epidemic, drought, etc in the 21st century may make one captious and may lead to violation of the SoPs, trusting that God will look after them.

Now-a-days a post is going viral that Tokningkhok (Houttuynia cordata) may be beneficial in combating COVID-19 after a Manipuri scientist claimed that his research on the plant yielded positive result. The result is based on in vivo test and even animal studies have not been conducted, not to speak of the three phase human trial. Now this herb is at a premium due to large scale buying. In our traditional system of medicine, it is used in dysentery, muscular pains, measles, gonorrhoea, eye and skin irritations, and for treating stomach ulcer. However, it was not given to children, as it can lead to kidney calculi formation and irritation of the urinary tract. Besides some Chinese studies has indicated that it is toxic at high dosage. The finding is too premature to make any claim as to the effect it may have on the human body, not to speak in vitro on the virus in the human body. From Petri dish to human body there is a huge gap.