AFSPA and the Chalwa incident

IFP Editorial: The agreement that Assam Rifles is willing to pay Rupees 10 lakh to the family of the victim should not become a divergence for CSOs from the original resolve of repealing AFSPA, which for all times sake will help in preventing such incidents. 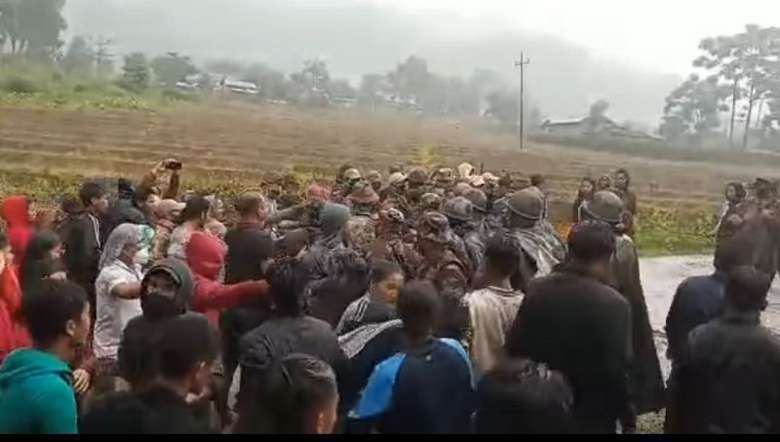 The Armed Forces Special Powers Act or simply AFSPA has been out of the public radar for quite some time. Out of action out of mind, as they say, till the Friday night incident when Assam Rifles personnel in mufti killed a 29-year-old father of four children in Kangpokpi district. In the aftermath, an enraged mob, including men and women of Twilang area, stormed the 44 AR outpost at Gelnel village and torched two vehicles of Assam Rifles. In the morning, it was found that two AK rifles in the Gypsy were also burnt along with the vehicles. The deceased Mangboilal’s father said that Major Alok Sathe and two others in civvies lured out his son Mangboilal Lhouvum from home and made him drunk before killing him point blank. The Assam Rifles version is that, Major Sathe and his associates were on the hunt for some KRA men in the area when the incident happened. The police were at first reluctant to arrest the AR Major Alok Sathe, as AFSPA was still in force in all areas of Manipur except the Greater Imphal area.

After a prolonged movement in 2004 for repeal of the controversial Armed Forces Special Powers Act (AFSPA) in the wake of the brutal rape and murder of Manorama Devi the then O Ibobi led Congress government had withdrawn it from seven assembly constituencies of Greater Imphal despite objections from the Centre. There were demands for repealing the Act from the whole of Manipur from various sections of the society as a result of overall improvement in the law and order situation of the state, but it has not moved forward since the 2004 decision. Congress MLA K Ranjit had questioned the resolve of the Chief Minister with regard to lifting of Armed Forces Special Powers Act from other parts of the state. K Ranjit recalled the spirit of N Biren then in 2004 when he and some other Congress MLAs pushed for removal of the Act from parts of the state with the then Chief Minister O Ibobi. Now that he is at the helm of state affairs, does he still have the same spirit or resolve as he had in 2004? That was K Ranjit’s question. Conditions have changed greatly, then and now. Now that the Army and MHA are on the same page regarding the Manipur situation.

Not so long ago, the Army Chief General MM Naravane said in January this year that the Army is planning to gradually reduce the number of troops deployed for internal security duties in the Northeast. As a result, the Army has already pulled out one of its brigades from the region and now plans to move out another one or two in the near future. The defence lobby has been at the forefront of opposing the withdrawal of AFSPA from areas where it is in force and states have always been reluctant to go against the lobby. But now, the Army Chief is openly admitting that the law and order situation has greatly improved in states including Manipur. The view of the Home Ministry is the same and it says that overall the security situation in Assam, Arunachal Pradesh, Manipur, Meghalaya, Mizoram, Nagaland, and Tripura has improved to a satisfactory level.

ALSO READ: For the love of Disturbed Area tag

While we still do not understand what is stopping the state approaching the Centre for repealing the Act and lifting the Disturbed Areas Act from the state, the Chalwa incident has given us new hope.

The Kangpokpi Police Station has registered a FIR against the AR Major and his associates of murder regarding the Chalwa incident, which is unprecedented. The Assam Rifles which is under the operational command of the Army will certainly try to ease out of the situation by invoking AFSPA and the need of prosecution sanction from the Defence Ministry. The agreement that AR is willing to pay Rupees 10 lakh to the family of the victim should not become a divergence for CSOs from the original resolve of repealing the Act, which for all times sake will help in preventing such incidents.

Perhaps, a judicial inquiry by not less than a sitting judge of the High Court should be demanded.