Of the 132 persons who were tested during the mass testing, six persons tested positive at Samurou Oinam on Saturday. 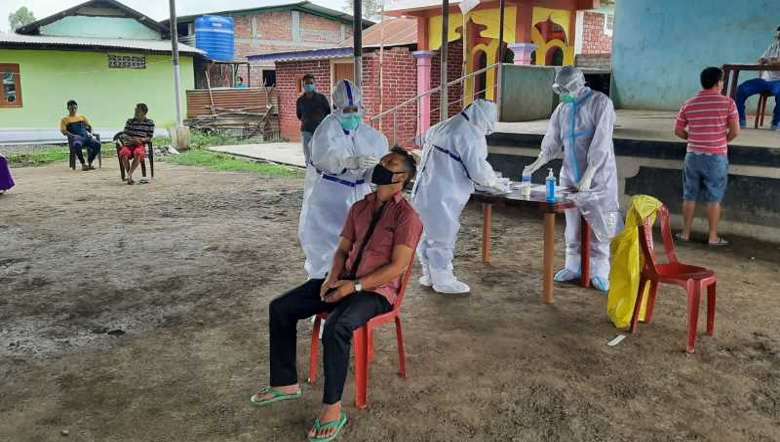 COVID-19 volunteers of Samurou Oinam on Saturday said district administration officials should provide prior information to respective local clubs before organising mass testing so that any miscommunication can be avoided between the authorities and local clubs which are going to carry out the drive.

For the mass testing that was conducted at Samurou Awang Leikai, Imphal West on Saturday during which six persons were tested positive, the local club demanded 150 testing kits from the district administration but only 132 testing kits were provided, stated chairman of COVID-19 volunteer Samurou Oinam, Moirangthem Lokeshwor Singh in a release.

The locals of the area expressed dissatisfaction for not providing a proper number of testing kits, it stated. The mass testing programme was conducted under the aegis of district administration, Imphal West, it mentioned.

Proper number of testing kits could not be provided during the drive as there was miscommunication among the officials of district administration and local clubs, it added. If prior information was given to the organisers, then the locals could have been satisfied, it further stated.

The release further stated that unwanted issues might occur if there were miscommunication among the officials and local organisers. Similar mass testing drives are being conducted in various areas of Wangoi assembly constituency; however, no representatives or individuals of the assembly constituency provided any financial support for the mass testing drive, it added.

Face masks, hand sanitisers and other medical items used by the volunteers were bought solely from the contributions of the locals volunteers. However, the expenditure for the mass testing drive conducted on Saturday was borne by former MLA of Wangoi assembly constituency Salam Joy, it stated.

It further stated that instead of discouraging or trying to dishearten the volunteers through social media, the people should extend support to the initiatives taken by the volunteers.