Art and its magic: Pari’s promise to Restore the ecosystem

Mere displacement of objects at the surface may not execute the promise. 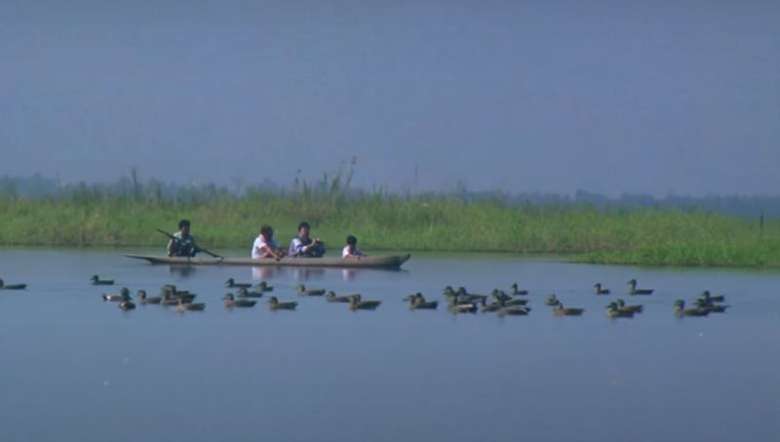 A still from film 'Pari'

We have been living quite in contest with nature, we have acted mightier, we have assumed ourselves as the measure of all things, as being that can alter, shape and reshape the given. And yet, we are unsuccessful in solving the problem of mosquitoes, despite scientific advancements, innovations on which our imagined superiority has manifested. In fact, our hegemonic attitude towards other beings has all the time turned against us. Constant attempts for geographic control, political advantages and economic gains have depended on science and technology to merely ravage the virginity and peace of nature and its cycle.

In March 1942, world’s first gambiae malaria broke out in the villages of Nubia, a country in Egypt’s southern border with Sudan. The causes however were driven by the sincere influence of political men in their attempt to demonstrate their techno-economic power driven modern sovereign state. The completion of Aswan barrage in 1902; the rise in use of synthetic chemicals and wars coincided in giving rise to a pandemic. In Can the Mosquito speak? Timothy Mitchel discloses that the British acknowledged the destruction of the dam and return to basin irrigation as the dam had facilitated the breeding of diseases. This is the bounded rationality of the human’s imagined superiority. He does not invent out of necessity but out of his desire to control. The escape from and the remedy of such anthropogenic activities is the magic of art.

Such magic is a force that pushes us back to our senses. Today’s scientific age is amusing when we talk of magic. This is imminent when it tries to depart from philosophy. If Knowledge does not exist in a vacuum, so does not magic. It has always been a magic wand for the artists in rupturing the justified common sense view. Aribam Shyam Sharma miraculously employs such magic in his film Pari, the story of a child fallen into the trap of human abasement. Produced by the Children’s Film Society, India, the film indicates the changing landscape of the Loktak Lake-the only habitat of the Sangai deer because of the Ithai dam built over the Imphal River.  The protagonist Sanathoi, who is overshadowed by the role he plays in a theatre performance in the film, is symbolic of a child’s innocent yet powerful dream of reconnecting man to its nature. In its very thoughtful amalgamation of dance-performance and cinema, Aribam Shyam Sharma utilises the cinematic form to disseminate the power of theatre. Pari, is a baby Sangai that departs from its mother because of the invasion of man into their territories in the play Pari. Sanathoi,played by child artist RK Surchandra, who will act Pari in the play in the movie is mesmerized by the flora and fauna of the Lake, he is often taken to by their theatre Oja (teacher) so as to learn and imitate correctly the movement of the animals and birds, which they will employ in their play. So much so he is dissolved into the character of Pari that he keeps on assuming himself as the deer. Sanathoi is constantly disturbed by the fact that Pari has lost its mother and his sole aim becomes to reunite them. He is suggested by his grandfather that only the Sangai Ningthou (King) can solve this problem. One day, Santhoi’s friend dreams of Sanathoi meeting the Sangai Ningthou and as he ran away, Sanathoi follows the Ningthou, but his friend caught him by his leg. When his friend narrated him the dream, Sanathoi is anxious that his friend should not have held him. “Dream again!” Sanathoi said. His friend closes his eyes and continues his dream, this time letting Sanathoi follow the Sanagi Ningthou. While appealing to the Sangai Ningthou,thatParibe reunited to its mother, Sangai Ningthouappeals instead that a promise be made that You will restore Nature and our habitat.

Pariis a name symbolic of the Son of the soil. The promise is hence the promise of the son of the soil who has forgotten the essence of our connection with nature. Forgotten while deeply engaged with profit earning? The film, through its theatrical events proposes us to complete our dreams confined in to our unconscious. It appeals us to become conscious of our negative desires and to accept man and nature in an inseparable non hierarchical connection. The magic realism of the film astonishes us while making us bound to think in terms of the possibilities in reality. This is the magic in art, which with all its forces debunks the one dimensional thought in us, rupturing the justified model of thinking. Only the magic in its best disguise promotes humans to speak out that cannot be spoken, think which cannot be thought, and act that cannot be acted.

Pari’s promise to restore the ecosystem is the possible in the impossible. It will demand for an ideological shift, thinking in terms of a newer paradigm which will ultimately require a re-working of the whole social system and collective thinking. It will require political consciousness, in spite of our varied interests. It is for us to learn and understand the problem at the core and hence, that mere displacement of objects at the surface may not execute the promise.