The AR unit Covid response team carried out sanitation of all the important population centres to include the church, market place, village quarantine centre, village containment zones in Kangpokpi. 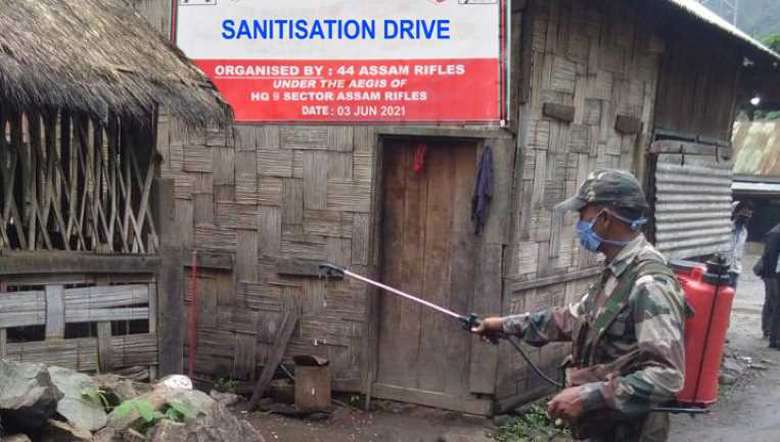 The 44 Assam Rifles under the aegis of HQ 22 Sect Assam Rifles/IGAR (E) in collaboration with IT Road task force undertook Covid sanitisation drive at Chalwa village in Kangpokpi district on Thursday, stated a release issued by PIB (Defence Wing).

The unit Covid response team carried out sanitation of all the important population centres to include the church, market place, village quarantine centre, village containment zones, it stated.

The team along with the local volunteers carried out spraying disinfectant around these places. An awareness campaign to educate the public about social distancing and how to stop the spread of the virus was also carried out. Locals were also encouraged to stay inside and told about the importance of washing of hands and maintaining hygiene and sanitation, PIB (Defence Wing) stated.

It mentioned that the unit’s vivid response team in collaboration with local volunteers shall be visiting other villages in the Tuling area to restrict the spread of the pandemic.

The team has planned to carry out a mass sanitation drive in the entire Tuilang area in coming days as a measure against the spread of the virus.

The unit is also conducting a vaccination drive in collaboration with the civil administration of the district, it added.