Doubts and concerns are being raised over the completion of the national project - Jiribam-Imphal rail line as construction works are progressing only in one or two locations.. 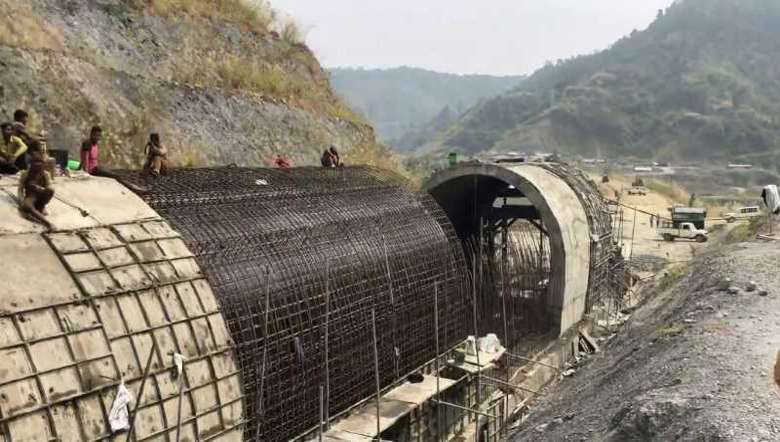 The construction of the first-ever rail line from Jiribam to Imphal, a national railway project, has reportedly come to a near standstill as works are in progress only in one or two locations, sources said.

If the present situation of the Jiribam-Imphal Railway Project is allowed to be continued, it could become a factor for non-completion of the railway project by its target year 2022, reliable sources said, adding that it may require another six-seven years and thereby deprive the people of Manipur from the benefits of having the cheapest transport facility in the state.

The sources revealed that the present setup of the engineers posted under the Northeast Frontier Railways assigned with the project work allegedly have no experience in construction of big railway projects like the Jiribam-Imphal Railway Project.

Therefore, there is reportedly no proper planning in execution of the railway works which in turn becomes a factor for slow progress of the works, the sources said, alleging that the authority concerned used to misbehave with the contractors and threaten them of penal actions like, termination of contract, imposing of penalties etc. for obvious reasons.

Urging the state government and the Centre to immediately intervene, the sources said the government should arrange an inquiry against the officials allegedly responsible for delay in the progress of the works and arrange suitable experts in similar nature of works to substitute them.

The sources also revealed that the long outstanding payments of huge amounts related to PVC Bills, GST neutralization bills etc. are held up, for which a few contractors have to approach the High Court for redressals which are being awaited.

It was revealed that the construction of the tallest railway bridge in the world at Marangching village in Noney district with a peir height of 141 metres, and about 703-metre long associated with this JiribamImphal railway project has not been allegedly taken-up till date as estimated due to reasons best known to the authority concerned. The bridge site is located about 65 km west of Imphal, Manipur.

The works for construction of railway line from Jiribam to Imphal began in 2007 to implement the Centre's plan for connecting the capital of all the states with the capital of India. The target of completion of the said railway project, that will provide connectivity to Imphal, the capital of Manipur in Northeast India, was initially fixed for 2017.  However, the target was again re-rescheduled in 2019 and finally for March 2022, as per the sources.

Commissioning of the Jiribam-Imphal Railway Project is projected to bring enormous benefits in respect of cheapest transport facilities, reduction of price of essential commodities, including visiting outside the state for better treatment facilities for which are not available in the state of Manipur, the sources added.

It may be mentioned that the Jiribam to Imphal railway project is being constructed by the Northeast Frontier Railway Construction Organisation at a cost of Rs 12,524 crore. The rail line that passes through hilly Tamenglong district includes 62 km of about 45 tunnels and as many as 139 bridges. The Tunnel Number 12 stretching to a length of 10.280 km, will be the longest railway tunnel in Northeast India. The construction of the rail line cutting through beautiful rivers and landscape of the lush green hills of the region has also led to massive destruction of vast forest cover. The road travel distance between Jiribam and Imphal along the National Highway-37 is about 75 km.