Heirok Assembly Constituency MLA Thokchom Radheshyam launched the Loubuk Maikei Panglashi Mission for the farmers in his constituency with the aim to rejuvenate all the main canals of paddy fields in the constituency. 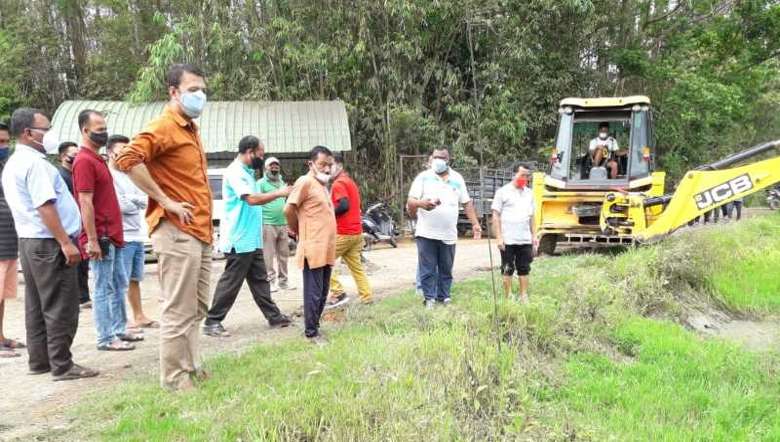 A canal rejuvenation mission dedicated to farmers of Heirok Assembly constituency was launched at Heirok in Thoubal district on Thursday, and 16 canals were rejuvenated on the first day.

Heirok Assembly Constituency MLA Thokchom Radheshyam launched the Loubuk Maikei Panglashi Mission for the farmers in his constituency with the aim to rejuvenate all the main canals of paddy fields in the constituency to provide adequate water supply to each and every group of paddy fields prior to the planting months.

The mission was launched at Heirok part-2, Loklaobung canal which is fully covered by grass and shrubs by re digging it using a JCB.

Altogether, 16 canals, five in Heirok part-2 and 11 canals in Heirok part-3 areas have been rejuvenated on the first day. Many farmers of Heirok part-2, including members of the farmer club Heirok took part in it.

Inspecting the re-digging work of canals personally at the site, MLA Radheshyam said, “As the monsoon season is approaching, our farmers of Heirok Assembly Constituency are busy preparing for planting paddy .Farmers suffered a lot when they tried to bring water through the canals as the canals are being covered by grass and shrubs. To lessen their hardships, we are launching "Loubuk Maikei Panglashi Mission" and under this mission, all the paddy field canals of Heirok Assembly Constituency will be rejuvenated.”

The mission will also cover to install small man made dams at proper areas and make available fertilizers to the farmers in time, he said.

“The present government led by N Biren also emphasised more on agriculture sector. We are prioritising our agricultural lands and aim at  producing more yields,” the MLA said.

Urging farmers hit hard by COVID-19 not to worry, he said, “We are ready to provide everything you need, our farmers needn't worry… all the canals of Salungpham village will be rejuvenated on Friday.

Lauding the farmers of his constituency for producing Kharif crops like cucumber, pumpkin, water melon and bottle gourd in large number, the MLA said, “All should support farmers and workers to uplift their per capita income”.

Pointing out that India as well as Manipur and for that matter, the Heirok assembly constituency  is mainly dominated by farmers, he said, “Without farmers and workers, we won't be able to survive. They should be paid much respect”.

For fertilisers, the MLA said that he had already talked with the concerned state Agriculture Minister regarding the availability of fertilizers and the MLA assured that "he was ready to provide fertilizers to each and every farmers of his assembly constituency" in time and added that he had contacted to supply the same from other places too.

Saying that there is no political motive on launching the mission, the MLA appealed to the public, especially the farmers of his constituency to extend their cooperation in the mission so that the Heirok Assembly Constituency can be turned into a model agricultural constituency.

Heirok Jilla Parishad member T Nungshi and many other eminent personalities from Heirok AC also took part at the launching event which is purely performed by maintaining  SOP guidelines.

It may be mentioned here that under the guidance of MLA Radheshyam, the digging of a large pond for providing uninterrupted water supply to nearly 600 acres of paddy fields of Heirok part-3 and Salungpham area had started at Heirok part-3 since February at Kangthak Loukol and it is nearly completed.