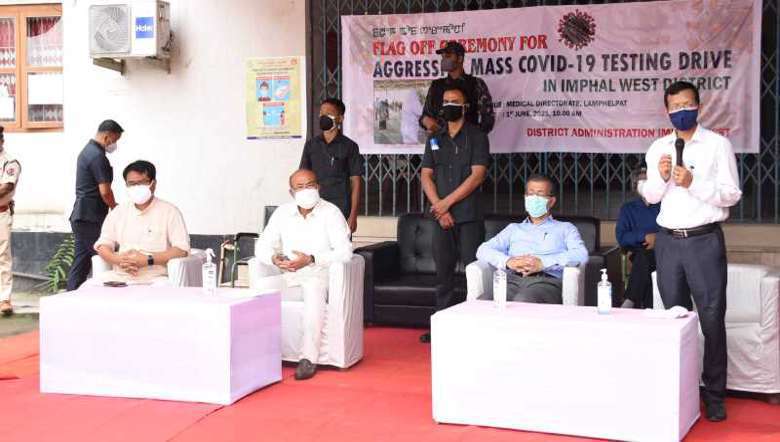 With the aim of early detection and early medication to flatten the COVID-19 curve, Chief Minister N Biren Singh on Tuesday flagged off the ‘Aggressive Mass COVID-19 Testing drive in Imphal West’ from the Health Directorate, Lamphelpat.

Speaking at the gathering, the chief minister expressed that he felt proud of the spirit and courage shown by frontline workers, including doctors, nurses and other paramedical staff while rendering their endless services to save the lives of people from the pandemic. He added that as the Indian Army sacrifices their lives in protecting the sovereignty of the motherland in many instances, Health workers do take an important role in saving the people’s lives in this crucial hour of the pandemic.

Asserting that the government had been putting in every possible effort to fight COVID-19, N Biren maintained that mass testing and mass vaccination drive was taken up to prevent the state from moving towards any uncontrollable situation. Maintaining that saving precious lives of people as priority in this hour, he appealed to the public to cooperate with the mass testing drive so that early medication could follow.

He said that positive cases would rise for some days with the beginning of mass testing; however, it would come down gradually. He further informed that he had advised sitting MLAs of all 60 assembly constituencies to set up Community Isolation Centres at their respective assembly constituencies for accommodating COVID-19 positive patients which are likely to increase with the mass testing drive.

Deputy commissioner, Imphal West Th Kirankumar said that the district administration had come with the mass testing drive under the direction of the chief minister to curb the spread of the pandemic. He further said that under the drive, around 3,500 to 5000 testing will be done every day for the next 15 days to identify positive cases and take necessary measures. He added that such steps would help in bringing down the number of positive cases in the following days.

He expressed his thankfulness to the State Health department, Manipur University, Canchipur, Heritage Convent, Uripok, local clubs and others for their support and cooperation in such an initiative.

The flagging off ceremony was attended by advisor to chief minister (Health) Dr Sapam Ranjan, principal secretary V Vumlunmang, officials of district administration, Imphal West and Medicate Directorate among others.