IFP Editorial: Nowadays, it has become a fashion for MLAs and ministers along with the wannabe politicians and intending candidates to pose for the camera while doing ‘charity’ and ‘humanitarian service’ of course with the help of paid cameras and indulgent media-persons. 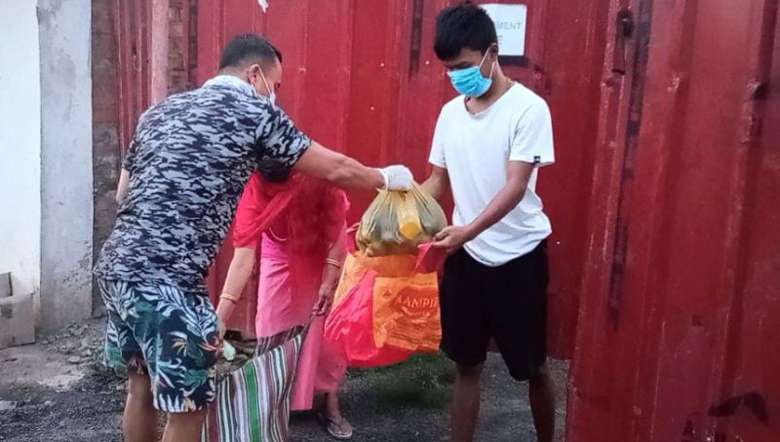 Former Tripura chief minister Manik Sarkar has alleged that incidents where BJP workers and leaders were preventing CPI (M) workers from distributing masks, sanitizers, and other COVID-19 related supplies were rampant across the state. The same thing seems to be happening in our state also. It was reported a few days back that volunteers of a Community Home Isolation Centre (CHIC) in a constituency prevented workers of a political party from offering food and other essential Covid-19 supplies to the inmates of the centre. Normally as per the norm, the local MLA chairs the management committee of the CHICs and bears the basic expenses of running the Centres in public interest. According to posts in the social media, the Singjamei constituency CHIC run by the Speaker Yumnam Khemchand at Manipur College is one of the best run centres where he has pulled in the services of the local doctors and nurses in his constituency also. Also a sportsman, the Speaker is one of the most down to earth politicians, who personally involves himself in community work even to the extent of handling the broom. Yet, we do not see him posting such shots in social media, like so many others. Nowadays, it has become a fashion for MLAs and ministers along with the wannabe politicians and intending candidates to pose for the camera while doing ‘charity’ and ‘humanitarian service’ of course with the help of paid cameras and indulgent media-persons.

A new class of political wannabes have entered the political landscape donning the garb of ‘social worker’ to hoodwink the general public. This group comes from different backgrounds. But, a common denominator among would be profiteering and questionable sources of income. Their backgrounds would vary from retired bureaucrats to contractors of all hues and businessmen with dubious interests, and of course criminals. The thirst for grabbing real power emanated from what they had seen in their pursuit of profit of what really the power wielders can do. So, their only aim and objective is to further their business interests with power in their hands, which ultimately requires them to take the role of a social worker. They are indeed wolfs in sheep’s clothing and not to be trusted at all. A first generation of these profiteers are already here in our midst and they are encouraging new wannabes to join the bandwagon of self-serving politicians. This is indeed a tragedy for the people. What we need now is a radical shift in our social and political perspective among the general population. Right from the grassroots and village level, there is a need to change the mindset of honouring the rich and officers with positions of power in leading and decision making at the village level. For example, people always tend to offer the post of Club President not to the deserving social workers but to persons who could bear public expenses from one’s own pocket without taking into consideration that the income might have been ill-gained. This trend needs to be overturned.

The other day, there was a news-item about some wannabe politicians about the distribution of Covid-19 aid to the constituents which turned ugly. In fact, there is a rush for distributing freebies like rice and dal along with onion and mustard oil by the wannabe politicians in the name of Covid-19 aid, while some of the MLAs sit idle, that people are becoming fed up with it. In fact, there are complaints among the public that if at all the wannabe politicians are really concerned about the health and well-being of the constituents, they are not doing enough. They say, no ‘social worker’ or political wannabe has come forward to distribute items with high protein content like chicken, eggs or fish. Some even say, they should be distributing oxygen cylinders or concentrators, and so on.

And, the list would go on and at the end, they would be left with no choice but to abandon charity or social work.