Why is the government silent on UNDP-Japan proposal to help combat Covid-19 in Manipur?

As the Manipur government takes the huge risk of procuring oxygen supply from other states in the fight against the pandemic, one big question that arises is - Did the N Biren Singh-led government miss the opportunity of getting oxygen plants and a dedicated COVID-19 hospital from the Japanese government? 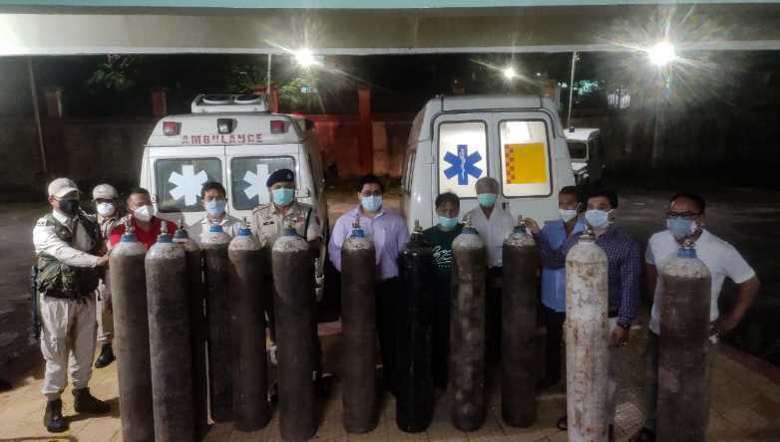 As Manipur reels under the second wave of the pandemic with increasing number of COVID-19 positive cases and deaths amid the shortage of oxygen and the state government is taking huge risk of procuring oxygen supply from other states during the pandemic, one big question that arises is - Did the Manipur government miss the green signal given by the Japanese Government and the UNDP to help address the plight of the people in the state? Did the N Biren Singh-led government miss the opportunity of getting oxygen plants and a dedicated COVID-19 hospital from the Japanese government?

In August 2020, it may be recalled that the Manipur government was asked to submit a proposal for availing aids from Japan to fight the COVID-19 pandemic in the state.

Now, as the second wave of pandemic continues to spread in India at an unprecedented pace, the Government of Japan and the United Nations Development Programme have partnered to provide oxygen generation plants to the states in Northeast India.

On May 10, 2021, the UNDP in a statement informed that the Government of Japan and the UNDP have joined hands to boost oxygen supply in the Northeastern region in India.

In view of the critical need to ensure uninterrupted oxygen supply, the UNDP and the Japanese government announced the installation of eight Pressure Swing Absorption (PSA) oxygen generation plants in Meghalaya, Nagaland and Tripura in Northeast India.

Hospitals in the region, with a capacity of approximately 1,300 beds in total, have been identified to install the oxygen generation plants. Excess oxygen will be distributed among other health facilities in the hospitals’ vicinity. The installation sites are being prepared so that the oxygen production can start at the earliest possible, the UNDP said in the May 10 statement.

In a letter addressed to the MEA, Jayantakumar sought the intervention of the ministry so that these aids that include Personal Protective Equipment (PPE); Ventilators; Favipiravirt (Avigan) tablet; including financial help for construction of dedicated COVID-19  hospital; expert doctors and nurses reach Manipur at the earliest.

In response to the letter, the External Affairs minister responded, saying the minister is holding talks with the Government of Japan for a programme loan for the health sector as a part of the Japanese assistance and grant-in-aid for strengthening the fight against COVID-19.

And on May 12, Lok Sabha MP Lorho S Pfoze had written to Chief Minister N Biren to seek the support of the Japanese Embassy and the UNDP to address COVID-19 issues in areas deprived of many critical and life-saving facilities. He had pointed out one key challenge--acute shortage of medical oxygen. He was mainly talking about the district hospitals, sub-district hospitals, community health centres and primary health centres, especially in far-flung and hill areas where the frontline health workers work, and mentioned that the lives of the population they serve are increasingly facing perils.

Taking serious note of the COVID scenario in the state, the MP reiterated his appeal and on Wednesday (May 20) urged the state chief minister to seek support from the Japanese Embassy and the United Nations Development Programme (UNDP)for providing uninterrupted flow of oxygen, including ventilators and oxygen concentrators in hospitals and health centres in the state, especially in remote areas.

It may be pointed out that to address the devastating impacts on the lives of the most vulnerable population, the Government of Japan and the UNDP India have been jointly supporting the Government of India’s response to the COVID-19 pandemic through strengthening of health and social protection systems and reviving livelihoods since June 2020.

Now, many observers are wondering how Manipur missed such an opportunity when an NGO from the state, the Apunba Imagi Machasing (AIMS) had long approached the Embassy of Japan in New Delhi on March 23, 2020.

In connection with the proposal, this Imphal Free Press reporter spoke to AIMS director Atom Sunil in a telephonic interview, who said that the health department of Manipur once approached him in 2020 to discuss the matter. But the state government might have failed to further pursue the matter.

Now with the second wave pandemic, the state is facing shortage of oxygen aids, and many are considering buying their own oxygen concentrators.

In view of the dire situation, if the state government moves ahead with the proposal process, the Japanese Government is ready to help, Sunil said.

However, on further investigation, this IFP reporter, through a WhatsApp message, was able to reach the additional director and spokesperson of the state Health Sevices, DR Khoirom Sasheekumar Mangang, who replied that he had no idea about the government action regarding it.

Several observers felt that the situation would have been different if the state government had initiated the process for proposal for aid and get some help from the Japanese Government.

In the joint statement of May 10, the Japanese Government stated: “Japan stands with India, our friend and partner, in her efforts to fight against COVID-19 pandemic at this critical time. I am pleased that Japan is working with the UNDP to provide vital oxygen generation plants for the people of India’s North East. India’s North East occupies a special place for Japan-India relations and I sincerely hope that the Oxygen generation plants will help those people in need in the North Eastern Region of India”, shared by His Excellency  Satoshi Suzuki, Ambassador Extraordinary and Plenipotentiary of Japan to the Republic of India".

Shoko Noda, Resident Representative, UNDP India mentioned in the statement: “I would like to thank the people of Japan for this critical support that will allow UNDP to ensure uninterrupted flow of oxygen in hospitals and health centres in the region, especially those in hard-to-reach areas. The situation in India is devastating and the pandemic continues to threaten millions of lives. UNDP urgently needs additional support to ensure that we reach the last mile to leave no one behind”.

In addition to this, UNDP has also been supporting the Ministry of Health and Family Welfare with digitization of the supply chain of vaccines and tracking beneficiaries across states to ensure better access and coverage. It has also helped build capacities of 820,500 frontline workers across the country to support the ‘world’s largest vaccination drive’. The Government of Japan has also committed a sizable commitment of providing critical items to India, including ventilators and oxygen concentrators.

Now as the people in Manipur struggle to combat the second wave of the COVID-19 pandemic and serious concerns are raised, will the N Biren Singh-led government act upon the help extended by the UNDP and the Japanese Government to save the lives of his people in the state?