EXCLUSIVE INTERVIEW: Riding high on the success of 'Highways of Life', director Amar Maibam shares his journey with the 'Imphal Free Press'. 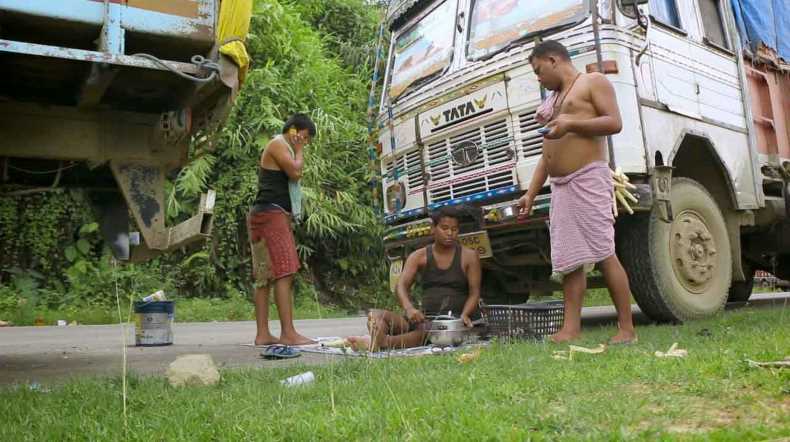 A scene from 'Highways of Life'

Giving a reason to celebrate during this crisis time of the Coronavirus pandemic, the 52-minute long documentary film – Highways of Life – directed by Amar Maibam from Manipur was awarded the Best Film among the eight films that competed at the international competition section of the eighth Liberation DocFest Bangladesh. The eight films were selected out of as many as 1,780 film entries from 112 countries for the festival.

Providing a detailed look at the high octane lives of Manipur’s highway truckers, the Highways of Life follows a group of truckers as they manoeuvre through the highways, putting their lives on the frontline, ferrying essential commodities to serve the people of Manipur.

Interestingly, director and cinematographer of the film, Amar Maibam, was a highway man himself. He is a bus conductor-turned filmmaker. He started his career in film making as an assistant to his late film maker father MA Singh, who is a pioneer in Manipuri Cinema.

In an exclusive interview to the Imphal Free Press, Amar recounted his roller-coaster journey and life on the highway from a bus conductor to a filmmaker and said that the making of Highways of Life was inspired by the many challenges and problems confronting drivers and handymen.

The turn of events in the life of Amar was an unchartered route. Driven and pushed by the tide of life, he moved ahead on to the highways of life.

It all began way back in 1994, after completing his matriculation, when Amar hopped onto the bandwagon of bus conductors along the Imphal-Moreh road.

“Even though my father did not approve, I worked as a bus conductor pertaining to the deteriorating financial position of my family with my father’s production ‘Chekla Paikhrabada’. We faced bankruptcy and the film did not make it to the screen,” he said.

Born to a filmmaker, his choosing to be a bus conductor, perhaps, was just a stepping ground that sealed his fate in the footsteps of his father. Today, Amar is  riding high on the success of Highways of Life, as he  tells his story to the world through the light of his lens.

“Highways of Life was inspired by the challenges and inconveniences confronting the drivers and handymen from collection of illegal taxes to atrocities of security personnel along the highways. I witnessed it all from 1994 to 2005 and I tell the story through the film,” Amar says as he talks about the making of the film.

However, it was only in 2006 that Amar decided to go full time in filmmaking and went for training in cinematography in Kolkata and joined other courses like film appreciation along the years.

Amar made his directorial debut with the documentary City of Victims that was released in 2009 based on the extra-judicial killings in Manipur. He also worked in several documentaries and fiction series for Doordarshan Kendra Imphal, Program Production Centre, Guwahati Doordarshan.

Amar is now doing post production for All for my sister, a documentary on international weightlifter Khumukcham Sanjita and her brother fighting for justice on her doping scandal and another biopic on Manipuri artiste late Lourembam Pishak also known as Abok Pishak.

Organised by the Liberation War Museum, Liberation DocFest Bangladesh is a festival dedicated to documentary cinema, seeking to highlight the struggle for liberation and human rights of people in various parts of the world and its contemporary significance.

The festival seeks to uphold new forms of viewing human suffering and struggle for justice in a global perspective. The festival also focuses on breaking new ground and on the great diversity and vitality of storytelling and creativity of the documentary genre.

Announcing the winner of the international competition, Kim Young Woo said Amar will receive $1,000, a crest and a citation.

The seven others in the international competition section are No Man’s Land by Charlotte Muller from Belgium; Our Territory by Mathieu Volpe from Belgium; A Long Journey for the First Steps by Jasmina Mustafic and Ratko Stojiljkovic from Slovenia; Oro Blanca by Gisela Carbajal Rodriguez; Who is Europe? by IanMcDonald from UK; Galena by Ezzatollah Parvazeh from Iran and Butterflies in Berlin-Diary of a Soul split in two’ by Monica Manganelli from Italy-Germany.