One box each of the drug sachets was handed over to the director, All India Institute of Medical Sciences (AIIMS) Dr Randeep Guleria and Lt Gen Sunil Kant of the Armed Forces Medical Services (AFMS) 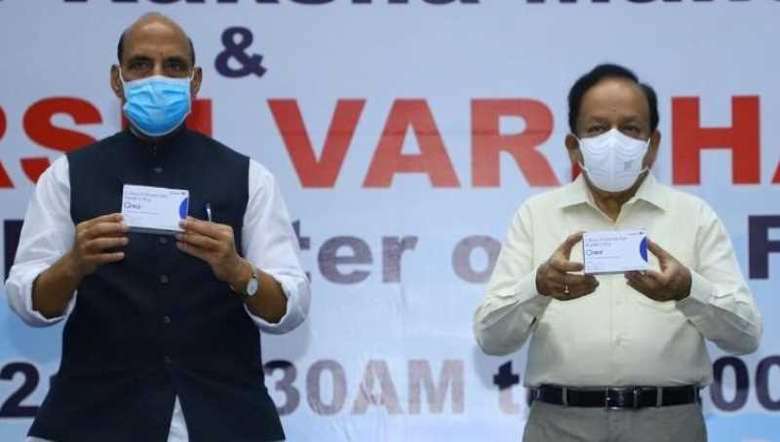 The first batch of the adjunct Covid therapy anti-Covid drug, 2-deoxy-D-glucose (2-DG), was released by Union Defence Minister Rajnath Singh and handed over to Minister for Health and Family Welfare, Science and Tech, and Earth Sciences Dr Harsh Vardhan in New Delhi on Monday, stated a release issued by PIB (Defence Wing).

One box each of the sachets of the drug was handed over to the director, All India Institute of Medical Sciences (AIIMS) Dr Randeep Guleria and Lt Gen Sunil Kant of Armed Forces Medical Services (AFMS), it stated. More will be handed over to different hospitals across the country for emergency use, it added.

An anti-Covid-19 therapeutic application of the drug 2-deoxy-D-glucose (2-DG) has been developed by Institute of Nuclear Medicine and Allied Sciences (INMAS), a lab of Defence Research and Development Organisation (DRDO), along with Dr Reddy’s Laboratories (DRL), Hyderabad, the release stated.

Speaking on the occasion, the defence minister congratulated DRDO and DRL, Hyderabad for manufacturing the drug that will help the COVID patients to reduce oxygen dependency and recover quickly. He described the drug as a perfect example of the country’s scientific prowess and a milestone in the efforts towards self-reliance.

“2-DG drug is a new ray of hope in these challenging times,” said Rajnath Singh, expressing confidence that the medicine will play a crucial role in winning the fight against COVID-19.

He said the development and production of the drug is a shining example of public-private sector partnership to help the nation in these challenging times. He further said that when the situation improves, he would personally like to honour the scientists who played a major role in the development of the drug as they deserve credit for this achievement.

He asserted that the Government is continuously monitoring the situation and taking effective steps to meet the requirement of oxygen supply, medicines and ICU beds in hospitals across the country through collective efforts of concerned Ministries/departments under the leadership of Prime Minister Narendra Modi, the release stated.

He pointed out that the oxygen supply in the country has been substantially increased to more than 9,500 Metric Tonnes (MT) per day from around 4,700MT at the start of May, it added.

He commended DRDO for setting up medical oxygen plants at various hospitals across the country under PM Cares Fund, besides constructing Covid hospitals, with ICU, oxygen and ventilators, in Delhi, Ahmedabad, Lucknow, Varanasi and Gandhinagar. Work is in progress to set up similar hospitals in Haldwani, Rishikesh, Jammu and Srinagar.  He also appreciated the passion of retired AFMS doctors who have answered the nation’s call and joined the medical fraternity in providing medical care to the needy, it stated.

Rajnath Singh underlined the important role being played by the Armed Forces in assisting the civil administration to tide over the current situation, the release stated. He said the Indian Air Force (IAF) and Indian Navy (IN) are working tirelessly to transport oxygen tankers, containers, concentrators and other critical medical equipment from within the country and abroad.

He also highlighted the expansion of treatment facilities at military hospitals which are now being provided to civilians as well. He reiterated the government’s resolve to provide medical care to each and every citizen of the country, saying that the Prime Minister has directed officials to conduct door-to- door testing, equip ASHA and Anganwadi workers with all necessary tools and provide all facilities in remote areas.

He urged all stakeholders to walk shoulder to shoulder in the country’s ongoing fight against the pandemic, expressing confidence that the country will emerge victorious against this invisible enemy, it stated.

He also referred to the preparedness of the Armed Forces, saying that while they are providing support to the civil administration in fighting the second COVID-19 wave, they have not let their guard down.

In his address, health minister Dr Harsh Vardhan termed 2-DG as an important development by DRDO and DRL, Hyderabad that will reduce the recovery time and oxygen dependency in COVID- 19 patients.

He hoped that the drug will go a long way in defeating the virus in not just India but across the globe. He congratulated DRDO and its scientists for playing an important role in the fight against COVID-19.

Secretary department of Defence R and D, and chairman DRDO Dr G Satheesh Reddy expressed confidence that the anti-COVID drug will help the patients recover from the deadly virus, hoping that DRL, Hyderabad will take it forward and soon make the drug available for the patients. He also thanked Raksha Mantri for his continuous guidance and support.

Joining the event virtually, chairman, DRL Kallam Satish Reddy said, “Dr. Reddy’s is glad to have partnered with DRDO and INMAS in the development of 2-DG. This is a re-affirmation of our company’s efforts to address COVID through a host of therapeutics and vaccines.”

Secretary (Health and Family Welfare) Dr Rajesh Bhushan and DG Health Services Dr Sunil Kumar were also among the dignitaries who attended the event, it stated. Besides chairman, DRL, director, Centre for Cellular and Molecular Biology Dr Rakesh Mishra and many doctors, hospitals and labs across the country joined the event virtually, it added.