The Manipur government must take action to prevent the possibility of physical attacks on humans by monkeys that have gone rogue, particularly during the COVID-19 pandemic. 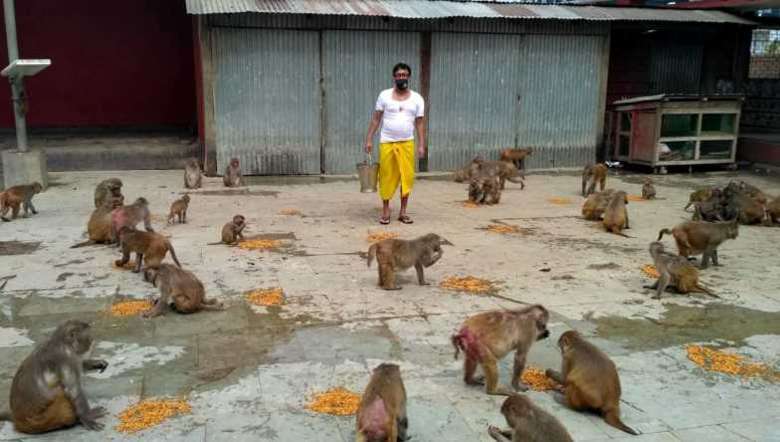 Amid the prevailing COVID-19 situation and reports of monkeys entering human settlements, it is high time the Manipur government starts keeping a close watch over the macaque monkeys in the surrounding forest area of Mahabali temple.

It is said that the monkeys were unleashed into the forest area locally known by Meiteis as ‘Mongba Hanba Laiphamlen’ as a form of worship of the Hanuman Thakur statue installed during the reign of king Pamheiba (Garibniwaz) after the king himself got initiated into the Ramanandi sect of Hinduism.

According to the present sevayat (caretaker) of the Mahabali Temple, Bachaspatimayum Gyaneshor Sharma, the size of the area is about five hectares with Imphal River as the boundary in the west, and a Rongmei village in the east. The total population of the rhesus monkeys is about 1,000, he said.

When being asked if there was any scarcity of food due to the Covid pandemic, and whether that has made the monkeys stray into nearby localities and streets, Gyaneshor said that there is no scarcity of food at all.

Gyaneshor also said that the practice of arranging religious banquets or feasts at the Hanuman Thakur Mandir has been restricted since March 2020, following the onset of the COVID-19 pandemic. Before the enforcement of restrictions, the temple authorities used to accept 20-50 requests for religious banquets daily, he said.

Even after the restriction, the monkeys have not faced any shortages of food as the state Forest department has been supplying food items every morning since March 2020. Besides, women fruit vendors, other people from different other areas, including Thangal Bazaar and Mantripukhri have also been bringing food items such as fruits and breads for the monkeys, he said.

When receiving reports that the monkeys have strayed into localities, the temple servants personally go to the reported places and catch them, Gyaneshor said, adding that the only threat the animals are facing is electrocution from the high tension (HT) line on the road in front of the temple.

However, even if there is no problem of food shortage for the monkeys, there is still the need for the government to initiate actions to prevent the monkeys taking advantage of the resulting quietness of lockdowns and curfews to enter human settlements.

If the concerned authority failed to take any action to address the menace that poses harm to the surrounding residents, there is always the possibility of physical attacks on humans by monkeys that have gone rogue.