The governor spoke at the webinar on ‘North East Beyond Insurgency and Ethnic Divide- Aspirations and Opportunities with Focus on Manipur.’ 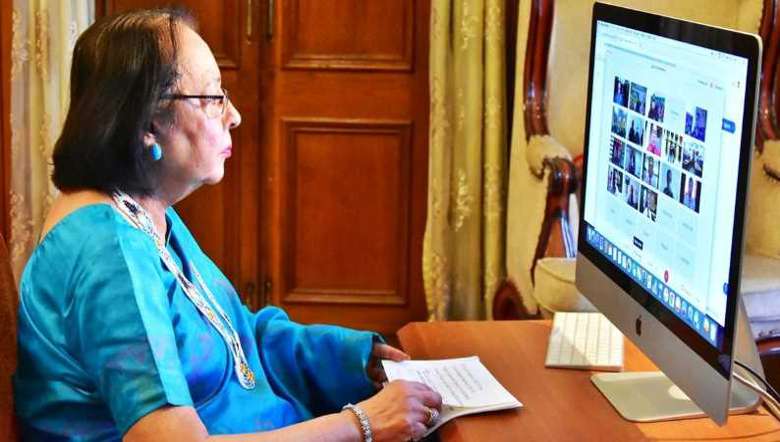 Governor Najma Heptulla applauded the Assam Rifles for their significant role in maintaining internal security with uncompromising dedication and sincerity, contributing to the promotion of peace and development in the entire region of North Eastern States. They have been variously hailed and veritably so, as ‘Friends of the North East People’ and ‘Sentinels of the North East’ and has contributed to the overall peace and prosperity in the region.

The theme of the webinar function was ‘North East Beyond Insurgency and Ethnic Divide- Aspirations and Opportunities with Focus on Manipur.’

The governor further said that North East India comprising eight States of India (Assam, Arunachal Pradesh, Manipur, Mizoram, Meghalaya, Nagaland, Sikkim and Tripura) shares its boundary with Tibet, Nepal, Bhutan, Myanmar and Bangladesh. These regions have witnessed insurgency for more than six decades. Even though some states in the region have remained peaceful after ending insurgencies, the overall situation in the region is not conducive to peaceful living and corresponding prosperity. Even though Manipur has seen an overall declining insurgency activity, the discontent in a stable settlement amongst the people still continues. During the past few months, the overall law and order situation has considerably improved and the subversive activities of various UG outfits were at low ebb, she added.

Continuing her speech, the governor said that there was an upsurge in the violence against the Security Forces, Paramilitary Forces and Indian Army by various insurgent groups, operating in both Hills and Valley Districts, but the same has not shown any sign of increase and seems to have been contained by the Security Forces and Indian Army. The Counter Insurgency (CI) operation conducted by the Assam Rifles are noteworthy, commendable and praiseworthy, she also stated.

Appreciating the role played by Assam Rifles, governor said that the aspirations of the Assam Rifles to bring a peaceful NE Region without insurgencies is an invaluable contribution to the country in general and NE Region in particular. The governor also thanked the Directorate of Assam Rifles for their efforts to organize such an important webinar at this critical juncture. The key role of undertaking CI operations by Assam Rifles at the border areas to prevent the insurgent groups from escalating violence is widely welcomed by all.

The AR has performed in an exemplary manner till date and must therefore, continue to do so whenever and wherever mandated for the welfare of the people of the North Eastern Region. Resolving the ongoing insurgencies in NER and the role played by the Assam Rifles will be the harbinger of peace and consequent economic prosperity for the millions of people in the North Eastern Region, she added.

Governor Najma also expressed her confidence that it will be a good step in the right direction, for the success of India’s ‘Look East Policy’ which was known as ‘ Act East Policy’ only then India will emerge as one of the global powers in a multi polar world of the 21st century.