Only Imphal West and Ukhrul have three ambulances each while the remaining districts have either only one or two. 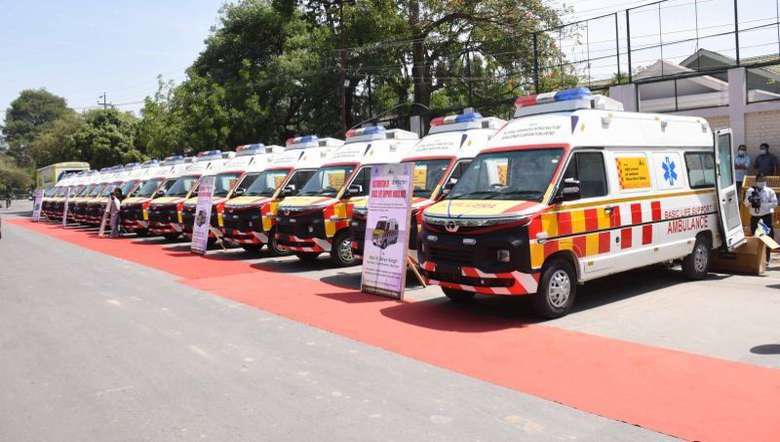 Inadequate ambulance facilities in various districts have posed another major challenge as the state is struggling to tackle the rising number of Covid-19 positive cases with limited resources in the wake of the second wave.

All the districts particularly those from where maximum cases were reported are facing a hard time in catering the ambulance services as only Imphal West and Ukhrul have three ambulances each while the remaining districts have either only one or two.

The Imphal Free Press interacted with several chief medical officers of various districts and the common problem as highlighted by them, is that the present number of ambulances operating in their respective districts is not enough, resulting in need of more drivers as well to ease overwork by the present drivers.

Despite Imphal East being an area reporting the majority of positive cases, the district at present has only two dedicated ambulances. Since there are no mortuary vans as well, the two ambulances are being used both for transporting Covid positive patients as well as bodies of those who succumbed to the infection, Imphal East CMO Dr Indira told the IFP.

It is becoming very difficult for the ambulance drivers as well to cover the whole district as cases are reported from different areas from far and wide. Sometimes, patients are compelled to hire private ambulances or other vehicles as they cannot wait for long, she said.

The CMO maintained that the health directorate has been urged to provide more ambulances and to depute more drivers since the first wave. “However, our demands have not been fulfilled yet”, she added.

It is learned that there are two kinds of services availed by private firms in the state namely Advance Life Support (ALS) and Basic Life Support (BLS). On average ALS starts from Rs. 3000 without ventilator and Rs. 4000 with ventilator within 5 km range.

In addition, the company charges extra Rs 80 and Rs 90 for each 1 km exceeding the 5 km range of their service, without ventilator and with ventilator respectively.  While some of the private stated that transporting COVID-19 patients with ALS service is mandatory, it declined to go into the details. Nevertheless, it said that for non-covid patients, people can hire BLS service starting from Rs 2,500 within 5 km distance.

Meanwhile, transport in charge of the health directorate, Dr S Gopal informed that Imphal West and Ukhrul have three dedicated ambulances each; Imphal East, Thoubal, Kakching, Tengnoupal, Pherzawl, Noney, Jiribam and Senapati have two while Bishnupur, Chandel, Churachandpur, Tamenglong, Kamjong and Kangpokpi have one dedicated ambulance each being operational. Besides, one mortuary van is being operational in five districts namely Ukhrul, Tamenglong, Churachandpur, Chandel and Imphal West, he said.

Gopal said two ambulances each at the 24x7 Covid Control Room at 1st MR and Bal Bhavan, National Sports University, Khuman Lampak and one each at Lamboi Khongnangkhong Covid Care Centre and RD Wing have also been arranged in case of emergencies. The medical directorate also has few additional ambulances and is likely to be dispatched in the near future as per the needs, he added.