A temporary diversion road on NH 102 B was eroded by heavy rains on May 4. But the contractor, Krishna Construction Company had tried to conceal the damage in which 50 per cent of the 120 feet-long retaining wall was eroded. 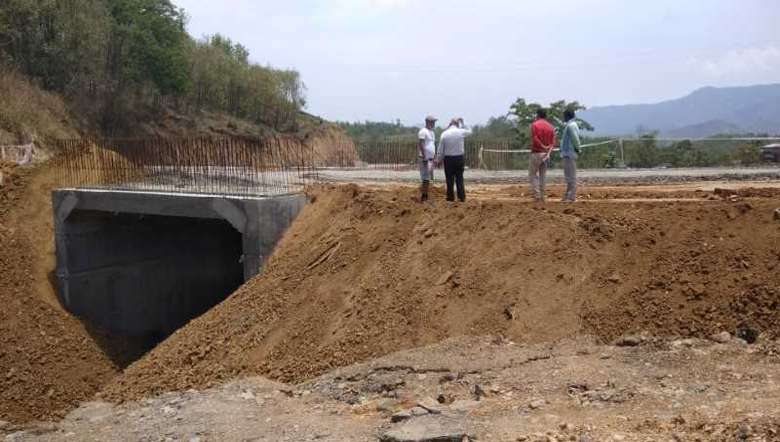 A team of social workers along with former MDC, CT Lian Guite on Friday carried out an inspection of the ongoing two-lane road construction on NH 102 B where a temporary diversion road was eroded by heavy rains on May 4 and stalled traffic for almost 12 hours.

Following the inspection, CT Lian Guite, who was accompanied by the assistant consultant of National Highways and Infrastructure Development Corporation (NHIDC), Pankaj, alleged that the contractor, Krishna Construction Company had tried to conceal the damage in which 50 per cent of the 120 feet-long retaining wall was eroded.

He said that there are several examples of complacency on the part of the contractor that can be witnessed especially at Mualtam and Gelzang villages where retaining walls as high as 40 feet had collapsed which the contractor had tried to conceal by burying the debris.

The team also visited Lamjang where construction materials such as ballast and bitumen are stored and mixed. After finding out that the stones used were of sub-standard quality, CT Lian said, “When the people of Churachandpur had high hopes that under NHIDCL the road will have at least a life span of 20 years and above, but the erosion that happened only after a single week of rainfall is a major disappointment.”

In regard to the issue, Pankaj on behalf of NHIDCL assured that the shortcomings will be rectified within two days. He also promised that the road between Buallian petrol pump and Mata Mualtam village will be straightened as per NH rules and regulation since the area in particular is an accident-prone zone.